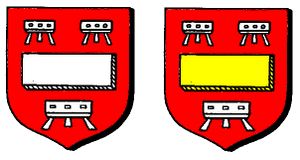 Robert de Stratford (c. 1292 – 9 April 1362) was an English bishop and was one of Edward III of England's principal ministers.

Stratford was born into the landed Stratford Family of Stratford-on-Avon around 1292. His father was another Robert and his mother was called Isabel. He was brother to John de Stratford (Archbishop of Canterbury) and possibly Henry de Stratford and Thomas de Stratford, Archdeacon of Gloucester (he was certainly a relation to both), to the latter of whom he gifted the manor of Shottery.[2] Robert senior has been identified as ‘Master’ Robert, co-founder and first master of the hospital of St Cross within the town, but in view of the title magister and the celibate status required, this appears unlikely. The family was related to the Hattons, important men in the town, Ralph Hatton ‘of Stratford’, the future bishop of London, being John's nephew. He was also a relative of Sir Andrew De Stratford.[3][4]

Stratford served for a time as deputy to his brother John.[5] From 1329 he served as Prebend of Aylesbury[6] and then from 1331 to 1334 he served as Chancellor of the Exchequer and from March to July 1338 as Lord Chancellor.[7] He was dismissed as chancellor in 1338[7] but regained the office for six months in 1340.

Stratford made his will and died at his manor of Aldingbourne in Sussex on 9 April 1362.[11] Probate was granted on the 26th. His recumbent effigy lies in the south choir aisle of Chichester Cathedral.[4]