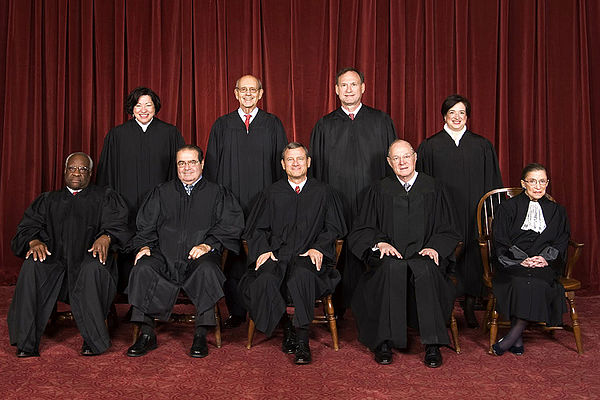 The Roberts Court refers to the Supreme Court of the United States since 2005, under the leadership of Chief Justice John G. Roberts. It is generally considered more conservative than the preceding Rehnquist Court, as a result of the retirement of moderate Justice Sandra Day O'Connor and the subsequent confirmation of the more conservative Justice Samuel Alito in her place.[1] Both Sotomayor and Kagan have joined the Court since that time.

Rulings of the Court

After the death of Chief Justice William Rehnquist, Roberts was nominated by President George W. Bush, who had previously nominated him to replace Sandra Day O'Connor. The U.S. Senate confirmed his nomination by a vote of 78–22.

Roberts took the Constitutional oath of office, administered by senior Associate Justice John Paul Stevens at the White House, on September 29, 2005, almost immediately after his confirmation. On October 3, he took the judicial oath provided for by the Judiciary Act of 1789, prior to the first oral arguments of the 2005 term.

Regarding Roberts' immediate and current peers on the bench, his judicial philosophy is seen as more moderate and conciliatory than that of Antonin Scalia and Clarence Thomas.[2][4] Unlike Scalia, Roberts has not indicated any particularly enhanced reading of originalism or framer's intentions as has been plainly evident in Scalia's speeches and writings.[3] Roberts' strongest inclination on the Court has been to attempt to re-establish the centrist orientation of the Court as being party neutral, in contrast to his predecessor Rehnquist who had devoted significant effort to promote a states rights orientation for the Court. Roberts' voting pattern reflecting his conservative judicial philosophy is most closely aligned to Samuel Alito on the Court,[5] the latter of whom has also become associated with libertarian trends in the conservative judicial philosophy.[2]

Since 2005, there have been a number of Supreme Court cases decided by the Roberts Court: