Robeson County is the largest county in the U.S. state of North Carolina. As of the 2010 census, the population was 134,168.[1] Its county seat is Lumberton.[2] The county was formed in 1787 from part of Bladen County. It was named in honor of Col. Thomas Robeson of Tar Heel, North Carolina, a hero of the Revolutionary War.

The University of North Carolina at Pembroke, a historically Native American college started as a normal school, is located in the county. 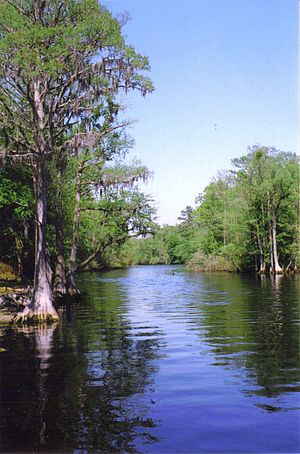 The Lumber River as seen from the boat launch at Princess Ann near Orrum. 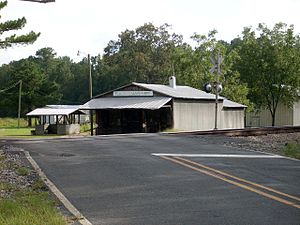 A railroad crossing and old general store in Rex 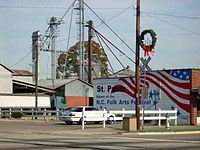 A view of St. Pauls

Archaeological excavation performed in Robeson County reveals widespread, continuous occupation of the region by various cultures of indigenous peoples since the end of the last Ice Age. They had camps and settlements near the Lumber River for its water, transportation, fish and related wildlife resources. Local excavations reveal that Native American peoples made stone tools, using materials brought to present-day Robeson County from the Carolina Piedmont. The large amounts of ancient pottery found at some Robeson County sites have been dated to the early Archaic Woodland period. Materials show that local settlements were part of an extensive Native American trade network with other regions. Portions of the river basin show that Robeson County was a "zone of cultural interactions."[citation needed]

After colonial contact, European-made items, such as kaolin tobacco pipes, were traded by the Spanish, French, and English to Native American peoples of the coastal region. The coastal peoples traded with those further inland. Remnants of European goods have been dated prior to permanent European settlements along the Lumber River.[citation needed]

Early written sources specific to the Robeson County region are few for the post-contact period of European colonization. In 1725, surveyors for the Wineau factory charted a village of Waccamaw Indians on the Lumber River, a few miles west of where Pembroke has developed. In 1773, a North Carolina Governor Arthur Dobbs proclamation related to a report from his agent, Col. Rutherford, head of a Bladen County militia, that a "mixed crew" of 50 families were living along Drowning Creek. They were referred to as "mullatos," generally meaning people of African and European descent.[4]

Bladen County encompassed a portion of what is today Robeson County. English colonials named the river "Drowning Creek". After the violent upheavals of the Yamasee War of 1715-1717, and the Tuscarora War of 1711-1715, families of Algonquian Waccamaw left South Carolina Colony in 1718. They may have established a village west of present-day Pembroke, North Carolina by 1725.[citation needed] The Iroquoian-speaking Tuscarora migrated north as a tribe, settling in New York and becoming the sixth nation of the Iroquois Confederacy.

The anthropologist John R. Swanton of the Smithsonian Institution tried to identify the origin of the ethnic group known as Croatan Indians since the late 19th century. Swanton posited that the multi-racial people were the descendants of Siouan-speaking peoples, of which the most prominent in the area were the Cheraw and Keyauwee. Some of his theories have been superseded by more recent evidence.[5] This ethnic group now identifies as the Lumbee Tribe of North Carolina and has state recognition.

The Lumbee oral tradition says that they developed from Native American descendants, including refugees of other tribes, such as Tuscarora. They emerged as a people in the early 19th century through a process of ethnogenesis.

Beginning in the mid-eighteenth century, many migrants from Virginia entered the frontier area. By the late eighteenth century, settlement patterns shifted. The name of the region's river was changed. After the American Revolution, the state used a lottery to dispose of lots with which to establish Lumberton. The town was incorporated in 1788, and John Willis proposed the name "Lumberton", after the important lumber and naval stores industry. This dominated the otherwise agricultural economy of Robeson County throughout the nineteenth century.

Lumberton developed at a section known throughout that century as "Drowning Creek," a term still used for the headwater portions of the river. The first Robeson County courthouse was erected on land which formed a part of the Red Bluff Plantation, owned by Lumberton founder John Willis. Robeson County's post office was established in 1794. In 1809, the state legislature renamed Drowning Creek as the Lumber River, after the area's major industry.

In the 1790-1810 censuses, descendants of these families were classified as both white (European American) and free people of color, which included people of African and Native American descent, as well as African-European. The settlers held few slaves.

Late 20th-century researchers have traced 80 percent of the free people of color in North Carolina listed in those two decades of censuses to African American families who were free in Virginia in colonial times. Based on court records, land deeds, indentures and other material, Paul Heinegg found that the free people of color (mixed-race) were descended mostly from white women (which is what gave them free status so early) and men who were African or African American in unions of the colonial years. In addition, some African male slaves had been freed in Virginia as early as the mid-17th century. Together with free white women, they founded free families of several generations before migrating to other areas. In the early years of the southern colonies, working-class whites and Africans lived and worked closely together, marrying and forming unions. Many free people of color migrated to frontier areas to gain relief from the racial strictures of the coastal plantation areas.[6]

In the nineteenth century, other settlers often referred to mixed-race people as Indian, Portuguese or Arab, in attempts to classify them to account for physical differences from northern Europeans. These people sometimes identified as Indian to escape the racial segregation associated with descendants of Africans. Some may have descended from Atlantic Creoles, men of mixed African-Portuguese ancestry identified by the historian Ira Berlin as part of the charter generation of slaves, but most were descendants of English white women and African men in the British colonies. Some likely intermarried with remnants of Indian tribes who remained in the area. Names on early land deeds and other historic documents in Robeson County correspond to many of the families of free people of color, including ancestors of contemporary Lumbee.[6] Settlements included Prospect and Red Banks.

By 1835, in the wake of Nat Turner's Slave Rebellion of 1831, North Carolina like other southern states reduced the rights of free people of color. Out of fear of slave rebellion aided by free blacks, the legislature withdrew the rights of free people of color to vote, serve on juries, own and use firearms, and learn to read and write. During the 1830s, the federal government forced Indian Removal, relocating the Cherokee and other of the Five Civilized Tribes of the lower Southeast to Indian Territory west of the Mississippi River. Native Americans who stayed in the Southeast tended to live in frontier and marginal areas to avoid white supervision. 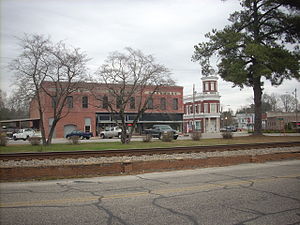 North Carolina seceded from the Union in 1861. A major yellow fever epidemic in 1862 killed 10 percent of the Cape Fear region's population. Most white men of military age had either enlisted with the Confederacy or fled the region. The Confederate Army conscripted African-American slaves as workers to build a system of forts to defend Fort Fisher, near Wilmington, North Carolina. Such conscription affected the free people of color of Robeson County, too.

Robeson County's home guard, which included county magistrates, clergymen, and lawyers, who mainly represented the interests of the planter class (large slaveholders were exempted from participation in the army), had raided the farmstead of Allen Lowrie, Henry Berry Lowrie's father. In the confrontation, they killed Allen and another son William. Henry Lowrie swore revenge.

Late in the Civil War, General William Tecumseh Sherman and his army began to push their way toward Robeson County as they headed north. After hearing of the Union Army's burning of Columbia, South Carolina on February 17, 1865, residents of Robeson County worried about the troops' advance. Washington Chaffin, a Methodist minister in Lumberton speculated in his diary about how the county might be treated by Sherman and his Yankees. Chaffin noted that Henry Berry Lowrie and his gang were "doing much mischief in this country." Lowrie's gang had "torn up and destroyed" white homesteads.[citation needed] In the late stages of the war, gangs and insurgents carried out private feuds.

During the next seven years, Henry Lowrie led a group of free people of color, poor whites and blacks in one of many postwar insurgent movements during years of social disruption. He campaigned against the white elite. His activities made him a folk hero to many of the poorer folk.[citation needed]

Until late in the 20th century, Robeson County was a center of Ku Klux Klan activity and support in North Carolina. On January 18, 1958, armed Lumbee chased off an estimated 50 Klansmen and supporters led by grand wizard James W. "Catfish" Cole at the town of Maxton in the Battle of Hayes Pond.

Robeson County is bordered by the state of South Carolina, and the North Carolina counties of Bladen, Columbus, Cumberland, Hoke, and Scotland.

The topography is mostly level to undulating coastal plain, largely made up of sandhills and coastal dunes with elevations above mean sea level that vary from 60 feet in the extreme southeastern portion of the county to 250 feet in the north, to the west of Parkton, North Carolina. Moreover, numerous swamps that generally flow in a northwest to southeast course, characterize the area and eventually drain into the Lumber River. The highest density of swamps is in that part of the county that is most populated by the Lumbee Tribe of North Carolina, a state recognized tribe.[8] 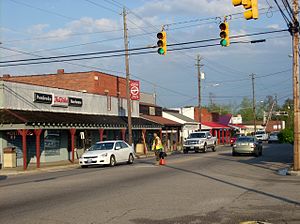 Pembroke is the center of the Lumbee community in Robeson County

The Lumbee Tribe of North Carolina, a state-recognized tribe, constitutes more than one-half the state of North Carolina's indigenous population of 101,000. With a population of 58,443, reflecting a 34.5% increase from the 1980 population of 43,465 members, the Lumbee reside primarily in Robeson, Hoke, Cumberland, and Scotland counties. In Robeson County, people identifying as Native Americans number 46,869 out of a total county population of 123,339. Most identify as Lumbee, and Native Americans make up 38.02%, comprising the largest racial/ethnic group in the county.

In 2010, the Robeson County Animal Shelter was the focus of animal welfare activists, who alleged that the shelter was not properly caring for animals in its care, not releasing homeless animals to qualified rescue organizations, and improperly utilizing heartstick euthanasia.[15] Widespread media attention appears to have resolved the matter; the shelter discontinued the euthanasia practices shortly thereafter.[16]

Robeson County is a member of the regional Lumber River Council of Governments. 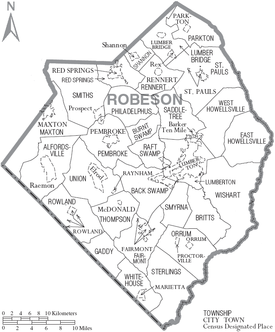 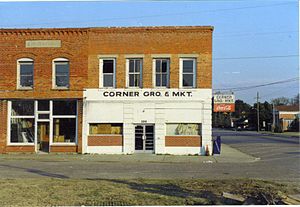