Sir William Robert Patrick "Robin" Knox-Johnston, CBE, RD and bar (born 17 March 1939) is an English sailor. In 1969 he became the first man to perform a single-handed non-stop circumnavigation of the globe and was the second winner of the Jules Verne Trophy (together with Sir Peter Blake). For this he was awarded with Blake the ISAF Yachtsman of the Year award. In 2006 he became at 67 the oldest yachtsman to complete a round the world solo voyage in the VELUX 5 Oceans Race.

He was born in Putney in London and was educated at the Berkhamsted Boys school. From 1957 to 1965 he served in the Merchant Navy and the Royal Naval Reserve. In 1965 he sailed his William Atkins design ketch Suhaili from Bombay to England. Due to a lack of money he had to interrupt his voyage for work in South Africa and was only able to complete it in 1967. In 1968 he was one of 9 sailors who attempted to achieve the first solo non-stop circumnavigation of the world in the Sunday Times Golden Globe race. He was the third sailor to start the race, and the only one to complete the voyage.[1]

In 1962 he married Suzanne (Sue), whom he had known from the age of 8 and they had one daughter, Sara, who was born in Bombay whilst he was at sea. She left him when he proposed taking her and the child back to England in his new boat Suhaili, and they were divorced in 1967.[2] However, in 1972 they remarried and now have five grandchildren. She died in 2003.[3]

Circumnavigation of the Earth 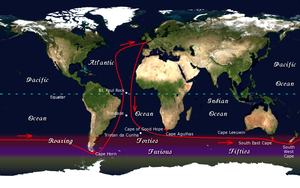 The route of the Golden Globe Race

On 14 June 1968 Robin Knox-Johnston left Falmouth in his 32-foot (9.8-metre) boat Suhaili, one of the smallest boats to enter the Sunday Times Golden Globe Race. Despite losing his self-steering gear off Australia, he rounded Cape Horn on 17 January 1969, 20 days before his closest competitor Bernard Moitessier. Moitessier had sailed from Plymouth more than two months after Knox-Johnson, but he subsequently abandoned the race and instead sailed on to Tahiti. The other seven competitors dropped out at various stages, leaving Knox-Johnston to win the race and become officially the first man to circumnavigate the globe non-stop and single-handed on 22 April 1969, the day he returned to Falmouth. Knox-Johnston donated his prize money for fastest competitor to the family of Donald Crowhurst, who committed suicide after attempting to fake a round the world voyage.

In recognition of his achievement, he was created a Commander of the Order of the British Empire.

Robin Knox-Johnston and Peter Blake (who both acted as co-skippers) won the Jules Verne Trophy for the fastest circumnavigation in 1994. Their time was 74 days 22 hours 18 minutes and 22 seconds. It was their second attempt to win this prize after their first one in 1992 had to be aborted when their catamaran Enza hit an object which tore a hole in the starboard hull.

From 1992 to 2001 he was President of the Sail Training Association. During his tenure the money was collected to replace the STA’s vessels Sir Winston Churchill and Malcolm Miller by the new, larger brigs Prince William and Stavros S. Niarchos. He was trustee of the National Maritime Museum at Greenwich from 1992 to 2002 and still is trustee of the National Maritime Museum – Cornwall at Falmouth, where Suhaili is berthed today. The yacht has been refitted and took part in the Round the Island Race in June 2005.

In 1996 Robin established the first Clipper Round the World Yacht Race and has since worked with the Clipper Ventures company as Chairman to progress the race to higher levels every year.[5] It is perhaps his greatest achievement to have introduced so many people to competitive sailing via their involvement in Clipper Ventures.

He completed his second solo circumnavigation of the world in the yacht SAGA Insurance on 4 May 2007, finishing in 4th place in the VELUX 5 Oceans Race.[6] At 68 he was the oldest competitor in the race.[7]

In late 2008/early 2009 he took part in a new BBC program called Top Dogs: Adventures in War, Sea and Ice. The program sees him unite with fellow British legends Sir Ranulph Fiennes, the adventurer, and John Simpson, the BBC World Affairs Editor. The team go on three trips, each experiencing each other's adventure field. The first episode, aired on 27 March 2009, saw Robin, Fiennes and Simpson go on a potentially very dangerous news-gathering trip to Afghanistan. The team reported from the legendary Khyber Pass and infamous Tora Bora mountain complex. The three also undertake a voyage around Cape Horn and an expedition hauling sledges across the deep-frozen Frobisher Bay in the far north of Canada.

In November 2014 the Clipper Race founder Sir Robin Knox-Johnston, at age 75, finished the solo Transatlantic race the Route du Rhum in third place in the Rhum class. He crossed the finish line on his Open 60 Grey Power at Pointe à Pitre at 16:52 hours local time/20:52 hours GMT after 20 days, 7 hours, 52 minutes and 22 seconds at sea.[9]