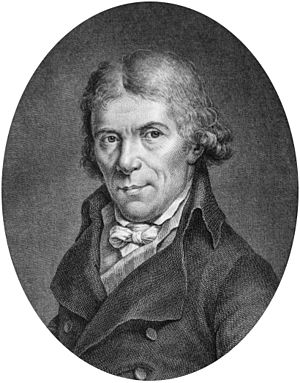 Born at Le Fousseret, in the ancient Province of Languedoc (now the Department of Haute-Garonne), and educated as a priest, Sicard was made principal of a school for the deaf at Bordeaux in 1786, and in 1789, on the death of the Abbé de l'Épée, succeeded him at a leading school for the deaf which Épée had founded in Paris. He later met Thomas Hopkins Gallaudet while traveling in England,[1][2] and invited him to visit the school.

Sicard's chief works were his Eléments de grammaire générale (1799), Cours d'instruction d'un sourd-muet de naissance (1800) and Traité des signes pour l'instruction des sourds-muets (1808). The Abbé Sicard managed to escape any serious harm in the political troubles of 1792, and became a member of the Institute in 1795, but the value of his educational work was hardly recognized till shortly before his death at Paris.[3]

In 1803 Sicard became a member of the Académie française, occupying Seat 3 as the successor to the François-Joachim de Pierre de Bernis, who was a diplomat.