The Rockefeller University is an American private university located in New York City in the United States, offering postgraduate and postdoctoral education. It conducts research mainly in biological sciences and medical science, and has produced or attracted many Nobel laureates. It has the highest number of Nobel Prizes in relation to personnel involved in research in the world. The Rockefeller University is located on the Upper East Side of Manhattan, between 63rd and 68th Streets along York Avenue. 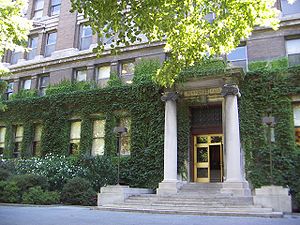 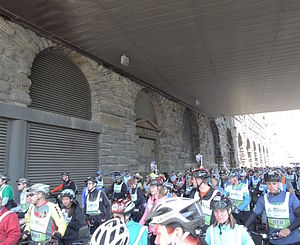 The first director of laboratories was Simon Flexner, who supervised the development of research capacity at the Institute, whose staff made major discoveries in basic research and medicine. While a student at Johns Hopkins University, Flexner had studied under the Institute's first scientific director, William H. Welch, first dean of Hopkins' medical school and known as the dean of American medicine.[3] Flexner retired in 1935 and was succeeded by Herbert Gasser.[5] He was succeeded in 1953 by Detlev Bronk, who broadened The Rockefeller Institute into a university that began awarding the PhD degree in 1954.[3] In 1965 The Rockefeller Institute's name was changed to The Rockefeller University.[3]

For its first six decades, the Institute focused on basic research to develop basic science, on applied research as biomedical engineering, and, since 1910—when The Rockefeller Hospital opened on its campus as America's first facility for clinical research—on clinical science.[6] The Rockefeller Hospital's first director Rufus Cole retired in 1937 and was succeeded by Thomas Milton Rivers.[7] As director of The Rockefeller Institute's virology laboratory, he established virology as an independent field apart from bacteriology.

Rockefeller researchers were the first to culture the infectious agent associated with syphilis,[8] showed that viruses can be oncogenic, and enabled the field tumor biology,[9] developed tissue culture techniques,[10] developed the practice of travel vaccination,[11] identified the phenomenon of autoimmune disease,[12] developed virology as an independent field,[13] developed the first antibiotic,[14] obtained the first American isolation of influenzavirus A and first isolation of influenzavirus B,[15] showed that genes are structurally composed of DNA,[16] discovered blood groups, resolved that virus particles are protein crystals,[17] helped develop the field cell biology,[18] resolved antibody structure, developed methadone treatment of heroin addiction, devised the AIDS drug cocktail, and identified the appetite-regulating hormone leptin.[19]

Urged by Rockefeller Jr, his only son, who was enthusiastic about the Institute, Rockefeller Sr visited but once.[23] Rockefeller Jr's youngest son David would visit with his father.[24] David Rockefeller joined the board of trustees in 1940, was its chairman from 1950 to 1975, chaired the board's executive committee from 1975 to 1995, became honorary chairman and life trustee,[25] and remained active as a philanthropist.[24]

To foster an interdisciplinary atmosphere among its 73 laboratories, the university assigns a faculty member to one of six interconnecting research areas.[26][27]