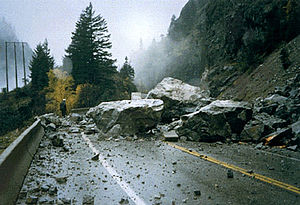 A rockfall or rock-fall[1] refers to quantities of rock falling freely from a cliff face. A rockfall is a fragment of rock (a block) detached by sliding, toppling, or falling, that falls along a vertical or sub-vertical cliff, proceeds down slope by bouncing and flying along ballistic trajectories or by rolling on talus or debris slopes,” (Varnes, 1978). Alternatively, a "rockfall is the natural downward motion of a detached block or series of blocks with a small volume involving free falling, bouncing, rolling, and sliding".

Favourable geology and climate are the principal causal mechanisms of rockfall, factors that include intact condition of the rock mass, discontinuities within the rockmass, weathering susceptibility, ground and surface water, freeze-thaw, root-wedging, and external stresses. A tree may be blown by the wind, and this causes a pressure at the root level and this loosens rocks and can trigger a fall. The pieces of rock collect at the bottom creating a talus or scree. Rocks falling from the cliff may dislodge other rocks and serve to create another mass wasting process, for example an avalanche. 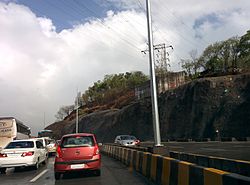 Typically, rockfall events are mitigated in one of two ways: either by passive mitigation or active mitigation. Passive mitigation is where only the effects of the rockfall event are mitigated and are generally employed in the deposition or run-out zones, such as through the use of drape nets, rockfall catchment fences, diversion dams, etc. The rockfall still takes place but an attempt is made to control the outcome. In contrast, active mitigation is carried out in the initiation zone and prevents the rockfall event from ever occurring. Some examples of these measures are rock bolting, slope retention systems, shotcrete, etc. Other active measures might be by changing the geographic or climatic characteristics in the initiation zone, e.g. altering slope geometry, dewatering the slope, revegetation, etc.

The picture shows a road, which stops big rocks.

The mode of failure differs from that of a rockslide.[1]

Effects on a tree

Effect on a tree. The tree roots may rotate - rotational energy. The tree may move - translational energy. And lastly deformation - either elastic or plastic. Dendrochronology can reveal a past impact, with missing tree rings, as the tree rings grow around and close over a gap. If you look microscopically then you see a difference with a callus tissue. A macroscopic section can be used for dating of avalanche and rockfall events.