From Infogalactic: the planetary knowledge core
Jump to: navigation, search
This article is about a race track in England. For the former NASCAR track in Rockingham, North Carolina, see Rockingham Speedway.

Located in Northamptonshire, Rockingham falls under the control of two local authorities. The main entrance is in Corby but the actual track is situated in East Northamptonshire.[citation needed]

Rockingham is easily accessible from the A1, M1, A14, A43 and A6116, and is located 30 minutes from Leicester, Peterborough and Northampton.

The nearest railway station is Corby, which is two miles from the circuit and runs an hourly direct service to London St Pancras International. 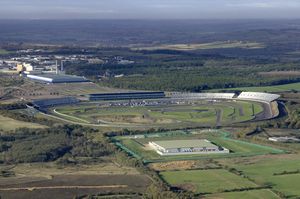 Rockingham has 13 configurations of track, which can be used for anything from touring cars to motorcycles to rally cars. The circuit is overlooked by the 6280 seat Rockingham Building, a steel-framed, glass-fronted grandstand building containing suites, offices, bars and kitchens, and by four grandstands. Together the building and grandstands offer a total seating capacity of 52,000. The inner pit and paddock complex is accessed from the Rockingham Building via two pedestrian tunnels and there is a further spectator viewing area on top of the pit garages.[1]

The 1.48 mile American-style banked oval circuit is 18.3 metres wide and has a maximum bank angle of 7 degrees and comprises four very distinct corners. Rockingham's oval is unique in the UK and one of only two speedways in Europe. The oval circuit can also be converted to a road course layout for events by positioning temporary chicanes and curves both on the main area and apron of the circuit.

Over the weekend of 20–22 September 2001, the Champ cars came to England for the first time to contest the Rockingham 500, a round of the CART (Championship Auto Racing Teams) Fedex Championship Series. For various reasons the race distance was shortened to 300 km and victory was snatched on the exit of Turn Four of the last lap by Gil de Ferran driving the Marlboro Team Penske Honda –powered Reynard 01i at a race average speed of 153.41 mph from Kenny Bräck at the wheel the Team Rahal Lola-Ford Cosworth B1/00, and the Newman-Haas Racing Lola-Toyota B1/00 driven by Cristiano da Matta. The fastest lap, and therefore outright lap record was set by Patrick Carpentier in 25.551secs (210.59 mph) in the Player’s Forsythe Racing Reynard-Cosworth. Carpentier became for first Canadian to ever hold the outright lap record at an English circuit.[4]

The US-based series returned in September 2002. This would be last time Champ Cars raced at this facility. This time ran over the full distance of 500 km, Scotland’s Dario Franchitti took the chequered flag in his Team KOOL Green Lola-Honda, beating Cristiano da Matta by just 0.986 of a second .[5]

The ISSC is 1.94 miles long and between 18.3 and 11 metres wide, with a maximum bank angle of 7 degrees at turn 1. Rockingham's International Super Sportscar Circuit is used by the Dunlop MSA British Touring Car Championship as well as for most other car race events. The circuit combines long straights, sweeping high-speed bends (including the infamous Turn 1 and Gracelands) with a lower speed, highly technical infield layout. Average lap speeds around the circuit range from 1m 24s in the BTCC to 1m 12s in British F3.

The site has a wet handling area with a kick plate which is used to simulate a variety of driving conditions including ice, rain and slippery wet leaves. These different road conditions are simulated at much slower speeds than in normal driving and in a fully controlled environment. The area is designed to give drivers a greater understanding of the latest ABS, traction control and crash mitigating technologies, and the way that they affect vehicle control.

Construction of Rockingham started late in 1999, with the opening meeting planned for May 2001.[4]

Rockingham Motor Speedway was constructed on a British Steel works brown field site as a banked oval with the intention of bringing the American oval racing across the Atlantic for the first time. The opportunity was taken to use the infield for further circuits.[2][4]

After almost ten years of planning and 23 months of construction work, Rockingham opened for business on Monday 15 January 2001. It was formally opened by the Queen on 26 May 2001.[2]

On 12 December 2004, the first Stage Rally, the Rockingham Stages, was held at the venue. This was jointly promoted by Middlesex County Automobile Club and Thame Motorsport Club.

From 2001 to the end of 2007, Rockingham organised and funded American-style Stockcar racing on the oval. Originally known as ASCAR, the series changed name to "Days of Thunder", and then to SCSA (Stock Car Speed Association), before re-branding to the MAC Tools V8 Trophy for its final season in 2007. All cars were UK variants of the American "ASA National-Tour" Howe Racing chassis, running with either Ford, Chevrolet or Pontiac bodies. A change of circuit ownership for 2006 saw the end of promotion and funding for the series, and low grids in 2007 led the organising club (BRSCC) to amalgamate it with a road course series, and eventually to the demise of both championships before the end of 2008.

The circuit is operational 357 days a year and the majority of events that take place at the venue are not motorsport competitions. Events range from manufacturer product launches to dealer training, track days and testing, and corporate and experience days.

Fifth Gear have recorded many items for the TV show at Rockingham including:

Wheeler Dealer also filmed an item on the Jaguar XJ8 and Top Gear came to Rockingham for the Alfa Romeo challenge. The recent PlusNet TV Advert was filmed on the oval and it is also the location where Ant & Dec's Saturday Night Takeaway, 'Beat The Boys' contest was filmed.

The Telegraph and Fiat Punto held a track day at Rockingham in 2012 and published a number of articles featuring the circuit. Autosport's Caterham SP300R video review was made on the ISSC, and Car Magazine did a track test on the Nissan GT-R vs Porsche 911 Turbo in 2012 and a McLaren supercar group test in 2010. Car Dealer magazine reviewed the BMW M5 at Rockingham and compared it with a Mercedes E63 AMG, a Lexus ISF, a Porsche Panamera and an Infiniti M35h. The circuit also features on the Pistonheads website with videos showing the Caterham SP300 R and the new Astra VXR. Chris Harris on Cars showcased the BAC Mono.

The Learning Grid Rockingham Festival in the first week of July promotes science and engineering to school pupils.

The venue has a sizeable showground area which has hosted the following shows:

A panorama of Rockingham
Retrieved from "https://infogalactic.com/w/index.php?title=Rockingham_Motor_Speedway&oldid=689088"
Categories:
Hidden categories: