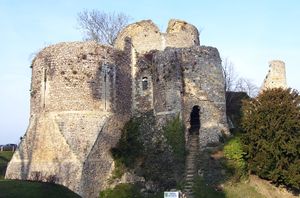 Keep (donjon) of Conches-en-Ouche, département Eure, Haute-Normandie, France. It was built 1035 by Roger I of Tosny and destroyed 1591 in the French Wars of Religion.

Roger I of Tosny or Roger of Hispania[1] (d. ca. 1040) was a Norman nobleman of the House of Tosny who took part in the Reconquista of Iberia.

Roger was the son of Raoul I of Tosny, seigneur de Conches.[2] In 1013, Roger and his father Raoul guarded the castle at Tillières for Richard II, Duke of Normandy.[3] A few years later, for an unknown reason, the pair were forced into exile. While his father gained a reputation for himself in Apulia, Roger did the same in fighting the Muslims in Iberia.[3] The small Christian states of Northern Iberia welcomed volunteers and adventurers who they could use to mount a strong force for the Reconquista. Roger was summoned by Ermesinde of Carcassonne, regent-countess of Barcelona after the death of her husband Ramon Borrell, to help her against the Muslim threat to her power. Roger rushed to help, marrying Ermesende's daughter,[4] terrorising the Saracens and capturing several towns and castles. Adémar de Chabannes gives an echo of the more or less legendary deeds of Roger in Iberia. He gained the nickname Mangeur de Maures (Moor-Eater). Adémar recounts that Roger took his captured Saracens each day and, in front of them, cut one of their number in two, boiling the first half and giving it to the other Muslims to eat, and pretending to take the other half into his own tent for him and his companions to eat. Then Roger allowed some of these prisoners to escape, to spread these horrific rumours.[5]

Before 1024, Roger and his father gained permission from Richard II to return to Normandy, and Raoul died soon afterwards.

Roger de Tosny founded Conches-en-Ouche. He built its church of Sainte-Foy[6] (before 1026) then the abbey of Saint-Pierre de Castillon (c. 1035) where monks from Fécamp Abbey were installed. This monastery was one of the first baronial foundations in Normandy[7] The foundation charter reveals that the lord of Tosny gave it a small possession around Conches and his forest.

In 1035, Robert I's death began a troubled period in the duchy of Normandy. Civil wars multiplied and Roger (whose relations with his neighbours was already argumentative) was one of the main players in them. According to the Norman chroniclers,[8] the lord of Tosny refused to serve the new duke, the future William the Conqueror, due to his being a bastard. He especially took advantage of the weakness of the duke's power by ravaging his neighbours' lands, notably those of Humphrey of Vieilles. Humphrey sent his son Roger to face Roger of Tosny, and around 1040 the latter was killed in battle, and his two eldest sons[9] died a few weeks later of their wounds.

Peace was re-established between the Tosny family and the neighbouring families. The widow Gotelina/Godehildis was forced to marry Richard, Count of Évreux.