James Roger McGuinn /məˈɡwɪn/ (born James Joseph McGuinn III on July 13, 1942)[1] known professionally as Roger McGuinn and previously as Jim McGuinn, is an American musician. He is best known for being the lead singer and lead guitarist on many of the Byrds' records. He is a member of the Rock and Roll Hall of Fame for his work with the Byrds.

He was also part of an author/musician band "Rock Bottom Remainders", a group of published writers doubling as musicians to raise proceeds for literacy charities. In July 2013, McGuinn co-authored an interactive ebook, Hard Listening, with the rest of the group.[2]

McGuinn was born and raised in Chicago, Illinois. His parents, James and Dorothy, were involved in journalism and public relations, and during his childhood, they had written a bestseller titled Parents Can't Win. He attended The Latin School of Chicago. He became interested in music after hearing Elvis Presley's "Heartbreak Hotel", and asked his parents to buy him a guitar. (During the early 1980s, he paid tribute to the song that encouraged him to play guitar by including "Heartbreak Hotel" in his autobiographical show). Around the same time, he was also influenced by country artists and/or groups such as Johnny Cash, Carl Perkins, Gene Vincent, and The Everly Brothers.

In 1957, he enrolled as a student at Chicago's Old Town School of Folk Music,[3] where he learned the five-string banjo and continued to improve his guitar skills. After graduation, McGuinn performed solo at various coffeehouses on the folk music circuit where he was hired as a sideman by the Limeliters, the Chad Mitchell Trio, and Judy Collins and other folk music artists in the same vein. He also played guitar and sang backup harmonies for Bobby Darin. Soon after, he relocated to the West Coast, eventually Los Angeles, where he eventually met the future members of The Byrds.[3]

In 1962, after he ended his association with the Chad Mitchell Trio, McGuinn was hired by Darin to be a backup guitarist and harmony singer. (At that approximate time, Darin wanted to add some folk roots to his repertoire because it was a burgeoning musical field.) Unfortunately, about a year and a half after McGuinn began to play guitar and sing with Darin, Darin became ill and retired from singing. Subsequently, Darin opened T.M. Music in New York City's Brill Building, hiring McGuinn as a song writer for $35 a week. During 1963, just one year before he co-founded The Byrds, he was a studio musician in New York City, recording with Judy Collins and Simon & Garfunkel. At the same time, he was hearing of The Beatles (whose first American tour would commence in February 1964), and wondering how Beatlemania might affect folk music. By the time Doug Weston gave McGuinn a job at the The Troubadour in Los Angeles, McGuinn had included Beatles' songs in his act. He gave rock style treatments to traditional folk tunes and thereby caught the attention of another folkie Beatle fan, Gene Clark, who joined forces with McGuinn in July 1964. Together they formed the beginning of what was to become The Byrds.[3]

During his time with The Byrds, McGuinn developed two innovative and very influential styles of electric guitar playing. The first was "jingle-jangle" – generating ringing arpeggios based on banjo finger picking styles he learned while at the Old Town School of Folk – which was influential in the folk rock genre. The second style was a merging of saxophonist John Coltrane's free-jazz atonalities, which hinted at the droning of the sitar – a style of playing, first heard on The Byrds' 1966 single "Eight Miles High", which was influential in psychedelic rock. 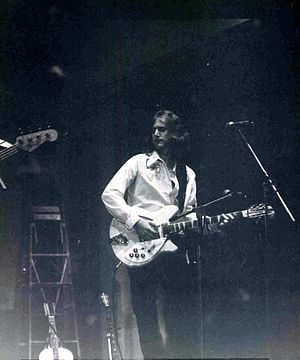 McGuinn with The Byrds at a concert held at Washington University in St. Louis (September 1972)

While "tracking" The Byrds' first single, "Mr. Tambourine Man", at Columbia studios, McGuinn discovered an important component of his style. "The 'Ric' [Rickenbacker guitar] by itself is kind of thuddy," he notes. "It doesn't ring. But if you add a compressor, you get that long sustain. To be honest, I found this by accident. The engineer, Ray Gerhardt, would run compressors on everything to protect his precious equipment from loud rock and roll. He compressed the heck out of my 12-string, and it sounded so great we decided to use two tube compressors [likely Teletronix LA-2As] in series, and then go directly into the board. That's how I got my 'jingle-jangle' tone. It's really squashed down, but it jumps out from the radio. With compression, I found I could hold a note for three or four seconds, and sound more like a wind instrument. Later, this led me to emulate John Coltrane's saxophone on "Eight Miles High". Without compression, I couldn't have sustained the riff's first note."[4]

"I practiced eight hours a day on that 'Ric,'" he continues, "I really worked it. In those days, acoustic 12s had wide necks and thick strings that were spaced pretty far apart, so they were hard to play. But the Rick's slim neck and low action let me explore jazz and blues scales up and down the fretboard, and incorporate more hammer-ons and pull-offs into my solos. I also translated some of my banjo picking techniques to the 12-string. By combining a flat pick with metal finger picks on my middle and ring fingers, I discovered I could instantly switch from fast single-note runs to banjo rolls and get the best of both worlds."[5]

Another sound that McGuinn developed is made by playing a seven string guitar, featuring a doubled G-string (with the second string tuned an octave higher). The C. F. Martin guitar company has even released a special edition called the HD7 Roger McGuinn Signature Edition, that claims to capture McGuinn's "jingle-jangle" tone which he created with 12 string guitars, while maintaining the ease of playing a 6-string guitar.

The Byrds recorded several albums after Mr. Tambourine Man in 1965. The single, "Turn! Turn! Turn!", written by Pete Seeger with the lyrics drawn from Ecclesiastes in the Old Testament, was The Byrds' second Number One success in late 1965. In 1969, McGuinn's solo version of the "Ballad of Easy Rider" appeared in the film Easy Rider, while a full band version was the title track for the album released later that year. McGuinn also performed a cover of Bob Dylan's "It's Alright, Ma (I'm Only Bleeding)" for the Easy Rider soundtrack. 1970's Untitled album featured a 16-minute version of The Byrds' 1966 hit "Eight Miles High", with all four members taking extended solos representative of their "jam-band" style of playing during that period.[6]

In 1968, McGuinn helped create the groundbreaking album Sweetheart of the Rodeo, to which many attribute the rise in popularity of country rock. McGuinn originally conceived the album as a blend of rock, jazz, folk and other styles; but Gram Parson's and Chris Hillman's bluegrass-western-country influences came to the forefront. Other artist's albums, and even Byrds songs by Hillman on previous albums, showed a strong country influence, but Sweetheart was the first fully-fledged country rock album.

After the break-up of The Byrds, McGuinn released several solo albums throughout the 1970s. In 1973 he collaborated with Bob Dylan on songs for the sound track of the Sam Peckinpah movie Pat Garrett and Billy the Kid including "Knockin' on Heaven's Door". He toured with Bob Dylan in 1975 and 1976 as part of Dylan's "Rolling Thunder Revue", cancelling a planned tour of his own in order to participate. In late 1975, he played guitar on the track titled "Ride The Water" on Bo Diddley's The 20th Anniversary of Rock 'n' Roll all-star album.

In 1978, McGuinn joined fellow ex-Byrds Gene Clark and Chris Hillman to form "McGuinn, Clark and Hillman", and the three together recorded an album with Capitol Records in 1979. The media loved the band and they performed on many TV rock shows, including repeated performances on The Midnight Special, where they played both new material and Byrds hits. "Don't You Write Her Off" reached #33 in April 1979. While some believe that the slick production and disco rhythms didn't flatter the group, and the album had mixed critically and commercial response, it sold enough to generate a follow up. McGuinn, Clark and Hillman's second release was to have been a full group effort entitled "City", but a combination of Clark's unreliability and his dissatisfaction with their musical direction (mostly regarding Ron and Howard Albert's production) resulted in the billing change on their next LP "City" to "Roger McGuinn and Chris Hillman, featuring Gene Clark".

In 1987 Roger McGuinn was the opening act for Dylan and Tom Petty. In 1991 he released his comeback solo album, Back from Rio to successful acclaim. It included the hit single "King of the Hill," written together with, and featuring, Petty.

On July 11, 2000, McGuinn testified before in a Senate Judiciary Committee hearing on downloading music from the Internet that artists do not always receive the royalties that (non-Internet based) record companies state in contracts, and that to date, The Byrds had not received any royalties for their greatest successes, "Mr. Tambourine Man" and "Turn, Turn, Turn" – they only received advances, which were split five ways and were just "a few thousand dollars" per band member. He also stated that he was receiving 50 percent royalties from MP3.com.[7]

Roger McGuinn has used the Internet to continue the folk music tradition since November 1995 by recording a different folk song each month on his Folk Den site. The songs are made available from his Web site, and a selection (with guest vocalists) was released on CD as Treasures from the Folk Den, which was nominated for a Grammy Award in 2002 for Best Traditional Folk Album. In November 2005, McGuinn released a four-CD box set containing one hundred of his favorite songs from the Folk Den.[8]

When he originally started with The Byrds, he used the name Jim, which he thought to be too plain. During 1965 McGuinn briefly explored the Subud spiritual association and began to practice the latihan, an exercise in quieting the mind. McGuinn changed his name in 1967 after Subud's founder Bapak told him it would better "vibrate with the universe." Bapak sent Jim the letter "R" and asked him to send back ten names starting with that letter. Owing to a fascination with airplanes, gadgets and science fiction, he sent names like "Rocket", "Retro", "Ramjet", and "Roger", the latter a term used in signalling protocol over two-way radios, military and civil aviation. Roger was the only "real" name in the bunch and Bapak chose it. While using the name Roger professionally from that time on, McGuinn only officially changed his middle name from Joseph to Roger. McGuinn left the Subud spiritual association in 1977, the same year that he met his wife Camilla (they married the next year). Both have become Christians since that time.[9]

McGuinn appears on Willie Nile's 1991 Places I Have Never Been album. McGuinn also appears on the 1994 Arthur Alexander tribute album Adios Amigo: A Tribute to Arthur Alexander, performing a cover version of "Anna (Go to Him)". He contributed two tracks, "Banjo Cantata" and "Ramblin' On", to a compilation of banjo pieces released by Davon as Banjo Greats (Volumes 1 & 2), re-issued on CD by Tradition in 1996 as Banjo Jamboree. He has also performed the songs "It's Alright, Ma (I'm Only Bleeding)" and "Ballad of Easy Rider" which were included on the soundtrack of the film Easy Rider. Another soundtrack that features McGuinn is the 1977 film Ransom. McGuinn performed "Shoot 'Em" which appears on the anthology album Byrd Parts 2, released on Australia's Raven Records label in 2003. McGuinn also appears with Bruce Springsteen on the live download "Magic Tour Highlights (Live)" singing "Turn! Turn! Turn!" Roger McGuinn also did guitar work in The Beach Boys version of California Dreaming video. McGuinn contributed 12 string electric and harmonies to Will Dailey's track "Peace of Mind" from Torrent, Volume 1: Fashion of Distraction.