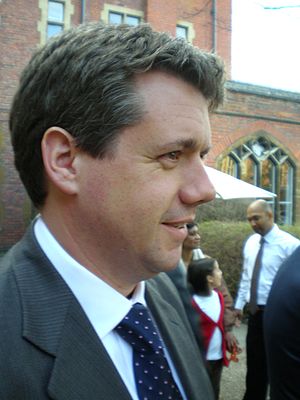 Roger Moorhouse (born 1968 in Stockport, Cheshire[1]) is a British historian and author.

He attended Berkhamsted School and the School of Slavonic and East European Studies of the University of London, graduating with an MA in history and politics in 1994.[2]

Whilst a student, Moorhouse worked as a researcher for Professor Norman Davies, collaborating on many of the latter's best-known publications, including Europe: A History, The Isles: A History and Rising '44 and culminating in the publication in 2002 of a co-authored study of the history of the city of Wrocław (the former German Breslau) entitled Microcosm: Portrait of a Central European City.

In 2006 Moorhouse's first solo book, Killing Hitler, was published, which has since appeared in numerous other languages, including German, Spanish, Chinese, Italian and Japanese. In a CNN news report of 3 September 2011, Killing Hitler was shown on Al-Saadi Gaddafi's desk after he had fled his office in the wake of the collapse of the Gaddafi regime in Libya. Reporter Nic Robertson suggested that Saadi Gaddafi had been reading the book prior to his flight.[3]

His next book, Berlin at War, is a social history of Berlin during World War II, which was published in the summer of 2010. Writing in the Financial Times, Andrew Roberts said of it that: "Few books on the war genuinely increase the sum of our collective knowledge of this exhaustively covered period, but this one does."[4] "Berlin at War" was listed amongst the books of the year for 2010 by the Daily Telegraph, American Spectator magazine and others, and was shortlisted for the Hessell-Tiltman Prize for history.[5]

In 2014 his The Devils' Alliance: Hitler's Pact with Stalin, 1939-1941 was published. Whilst praising the book for its "masterly" account of the signing of the Molotov–Ribbentrop Pact, historian Richard J. Evans took exception to the book's "unbalanced treatment" of the crimes of the Soviets over those of the Nazis, saying that "for all its virtues this is a deeply problematic book".[6] Other reviewers of the book were more positive – the Wall Street Journal described it as "superb"[7] and the Daily Telegraph listed it among its Books of the Year for 2014.[8]

A fluent German speaker, Moorhouse is a specialist in modern German history, particularly Adolf Hitler and the Third Reich. In this capacity, he has written for the Independent on Sunday, and the Financial Times, and is a regular contributor to both the BBC History magazine and History Today.

Moorhouse is a regular public speaker, having appeared at the Edinburgh International Book Festival and the London History Festival. He also conducts educational tours of Germany, organised by Historical Trips Ltd.[9] A member of the British-German Association, and a Fellow of the Royal Historical Society.

Moorhouse is married with two children and lives in Buckinghamshire.