From Infogalactic: the planetary knowledge core
Jump to: navigation, search
This article is about 17th-century English lawyer and biographer. For other uses, see Roger North (disambiguation). 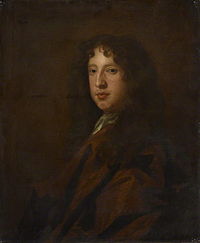 He was the sixth son of Dudley North, 4th Baron North and his wife Anne Montagu and was the brother of Francis North and Dudley North. He was born in Tostock Suffolk. He attended Bury St Edmunds Grammar School and then Thetford Grammar School from 1663,[2] followed by Jesus College, Cambridge and the Middle Temple. He was called to the bar in 1674, and was Steward of the Diocese of Canterbury in 1678. He became King's Counsel and a Bencher of Middle Temple in 1682.[3]

He later developed a good practice at the bar, helped by his elder brother Francis who became Lord Chancellor. Henry Hyde, 2nd Earl of Clarendon called him "one of only two honest lawyers I ever knew".[4] During the Popish Plot, while Francis succumbed to the prevailing ant-Catholic hysteria, Roger remained detached and sceptical. Although he was always loyal to his brother's memory, Roger admitted that during the Plot many "wise men behaved like stark fools". In 1684 he became Solicitor-General to the Duke of York.[5] After this his career suffered something of a check: Francis' unexpected early death in September 1685 was both a personal loss and a blow to Roger's career, since Francis was replaced as Lord Chancellor by the formidable Lord Jeffreys. Roger, who left a scarifying picture of Jeffreys in his memoirs, was a rather shy and diffident man, and frankly admitted to being terrified of Jeffreys; as a result in his own words his practice "declined so as to be scarce worth attending Court".[6] The check was only temporary: in 1685, he was chosen as a Tory Member of Parliament for Dunwich, and became Recorder of Bristol. He was further advanced in 1686 to the office of Attorney General to Queen Mary of Modena.[5] The Glorious Revolution stopped his advancement, and he retired to his estate of Rougham in Suffolk and increased his fortune by marrying the daughter of Sir Robert Gayer.[7]

He died at Rougham on 1 March 1734, leaving a family from whom the Norths of Rougham were descended.[5]

He collected books, and was constantly occupied in writing, but he is best known for his Lives of the Norths, published after his death, together with his own autobiography (edition in Bohn's Standard Library, 1890, by Augustus Jessopp), an authority for the period. His comments on musical performance practice, in particular, have proven helpful for musicologists researching the Baroque style in England. In addition to his writing on performance practice he wrote on musical aesthetics, on pedagogy, and on tuning and temperament; one of his most important achievements in this regard was devising a practical and detailed system for mean-tone tuning in the age before equal temperament. Another well-known work is Examen, a defence of Charles II's record as a ruler. He was also a learned connoisseur of architecture and designed a new gateway for the Middle Temple in London and a Palladian extension to his house at Rougham.[8]

North married Mary, the daughter of Sir Robert Gayer of Stoke Poges, Buckinghamshire, with whom he had two sons and five daughters.[7] Notable descendants include Marianne North, the botanical illustrator, and Frederick North, a Liberal politician.

To say truth, although it is not necessary for counsel to know what the history of a point is, but to know how it stands now resolved, yet it is a wonderful accomplishment, and, without it, a lawyer cannot be accounted learned in the law.[9]

Of the Popish Plot:

Wise men behaved like stark fools, and good and honest men like the veriest fourbs (fraudsters) that ever came out of Newgate.[10]

People's passions would not allow them to attend to any reason or deliberation in the matter.. one might have denied Christ with more content than this Plot.[11]

His course of life was scandalous and his discourse violent and intemperate. His talent was wit...he had a fluent expression and many good terms of thought and language, but he could not avoid extremities. If he did ill, it was extremely so, and if he did well, in extreme also.[12]

His friendship and conversation lay much among the good fellows and humourists, and his delights were accordingly drinking, laughing, singing, kissing and all the extravagances of the bottle...no friendship....could be so great in private which he would not use ill ....in public. No one that had any expectation from him was safe from his public contempt and derision."[13]

The rising sun hath a charming effect, but not upon courtiers as upon larks: for it makes these (larks) sing and the others (courtiers) silent".[14]