Bearded Norman nobleman depicted in the Bayeux Tapestry (c.1066), possibly representing Roger de Beaumont (died 1094). The figure is seated at the right hand of Duke William of Normandy, who himself occupies the place of honour at the ceremony of the blessing of the food at Hastings by Bishop Odo, well before the time of the battle 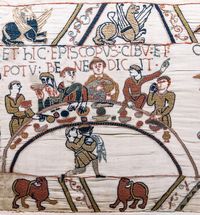 ET HIC EPISCOPUS CIBU(M) ET POTU(M) BENEDICIT ("And here the bishop blesses the food and drink"). The feast at Hastings, after which a castle was ordered to be built, following which battle was joined. Roger de Beaumont is possibly depicted as the bearded figure, see detail above. Bayeux Tapestry

Roger de Beaumont (c. 1015 – 29 November 1094), feudal lord (French: seigneur) of Beaumont-le-Roger and of Pont-Audemer in Normandy, was a powerful Norman nobleman and close advisor to William the Conqueror.

He was a son of Humphrey de Vieilles (who was a great-nephew of the Duchess Gunnora of Normandy) by his wife Albreda de la Haye Auberie. Roger de Beaumont was thus a second cousin once removed of William the Conqueror. His Norman feudal lordship had its caput and castle at Beaumont-le-Roger, a settlement situated on the upper reaches of the River Risle, in Normandy, about 46 km SW of Rouen, the capital of the Duchy. He was also feudal lord of Pont-Audemer, a settlement built around the first bridge to cross the River Risle upstream of its estuary, shared with the River Seine.

Roger was nicknamed La Barbe (Latinised to Barbatus) (i.e. "The Bearded") because he wore a moustache and beard while the Normans usually were clean shaven. This peculiarity is believed to be recognized in the thirty-second panel of the Bayeux Tapestry where he is depicted sitting at a feast near Hastings, well before the battle, at the right hand of Duke William, who in turn was seated at the right hand of his brother Bishop Odo of Bayeux, who is shown blessing the food at a feast.

Planché described him as "the noblest, the wealthiest, and the most valiant seigneur of Normandy, and the greatest and most trusted friend of the Danish (i.e. Norman) family". The explanation for his exalted position appears to be that as an older cousin who had never rebelled against the young Duke, he was part of the kinship group of noblemen that William relied upon in governing Normandy and fighting-off frequent rebellion and invasions. The historian Frank McLynn observed that William relied heavily on relatives on his mother's side, namely his half-brothers Bishop Odo and Robert, and brothers-in-law, and on relatives descended from the Duchess Gunnora's sisters, since his own paternal kin had proved unreliable.

Wace, the 12th century historian, wrote that: "At the time of the invasion of England, Roger was summoned to the great council at Lillebonne, on account of his wisdom; but he did not join in the expedition as he was too far advanced in years". Although Roger could not fight, he did not hesitate in contributing a large share of the cost, and provided at his own expense sixty vessels for the conveyance of the troops across the channel. Furthermore, his eldest son and heir fought bravely at Hastings as noted in several contemporary records. As a result, Roger's elder sons were rewarded generously with lands in England, and both eventually were made English earls by the sons of the Conqueror. Wace's statement may therefore cast doubt on the possibility of Roger being depicted in the Bayeux Tapestry feasting at Hastings. However it is possible that he crossed the Channel so he could continue to act as a valued member of the Duke's council, perhaps giving advice on military tactics, yet stayed well behind the line of battle at headquarters.

He married circa 1048 or earlier Adeline of Meulan (c. 1014-1020 - 8 April 1081), who was buried at the Abbaye du Bec, the daughter of Waleran III, Count de Meulan by Oda de Conteville, and sister and heiress of a childless Count of Meulan. Meulan eventually passed to their elder son who became Count of Meulan in 1081. Their surviving children were:

He was buried at Les Préaux.

Roger de Beaumont appears as a minor character (the overlord of the secondary hero) in Georgette Heyer's historical novel The Conqueror. His family appears little in the book, but reference is made to Roger's wife and daughters and his eldest son.