Rogers Park is one of the 77 Chicago community areas on the far north side of Chicago, Cook County, Illinois and is also the name of the Chicago neighborhood[3][4] that constitutes most of the community area. Rogers Park is located nine miles north of the Cook County Courthouse in downtown Chicago. It is bounded by the city of Evanston along Juneway Terrace and Howard Street to the north, Ridge Boulevard to the west, Devon Avenue and the Edgewater neighborhood to the south, and Lake Michigan to the east. The neighborhood just to the west, West Ridge, was part of Rogers Park until the 1890s.

The Rogers Park area was developed on what once was the convergence of two Native American trails, now known as Rogers Avenue and Ridge Boulevard, predating modern metropolitan Chicago. The Pottawatomi and various other regional tribes often settled in Rogers Park from season to season. The name of Indian Boundary Park west of Rogers Park reflects this history as does Pottawattomie Park near Clark Street and Rogers Avenue.

In 1809, the Karthauser Inn was established as stagecoach stop and tavern.[5] One of the original settlers (1836) of the area was Phillip Rogers, who operated a toll gate beside his home at what is now Ridge and Lunt Avenues and often traded and worked with the local tribes.

During the period 1844 to 1850 arriving settlers started farms along a ridge in the western portion of Rogers Park, avoiding the often flooded lowlands to the east. In 1870 Rogers' son-in-law, Patrick I. Touhy, sold 100 acres to land speculators, including John Farwell, Luther Greenleaf, Stephen Lunt, Charles Morse, and George Estes; all of whom contributed names to streets in the area.[5] With an additional purchase of 125 acres in 1873 these speculators together with Touhy formed the Rogers Park Building and Land Company. Also in 1873, the Chicago & Northwestern Railway completed a service line through the area and constructed a station at Greenleaf Ave. The population was 200 and a Post Office was opened in July 1873. Five years later, the voters agree to incorporate as a village under the name of Rogers Park.[5]

On April 29, 1878 Rogers Park was incorporated as a village of Illinois governed by six trustees. In 1885, the Chicago, Evanston & Lake Superior Railroad, a predecessor of the Chicago, Milwaukee & St. Paul Railroad, built a combination freight and commuter line through eastern Rogers Park on the present "L" right-of-way with a stop at Morse Avenue. By 1893, the population was 3500, the North Shore Electric Railroad expanded its service into the area, and the village of Rogers Park was annexed to Chicago.[6]

The Rogers Park Women's Club opened the first library in 1894. In that year, the Great Fire of Rogers Park destroyed the business district.[5]

By 1904 the population had grown to 7,500. The NorthWestern elevated line was extended from Wilson (4600N) to Howard Street (7600N). St. Ignatius College moved to the lakefront in 1912, and changed its name to Loyola University in 1915. Successive generations brought about vast cultural changes to the former village. By 1930 the population was 57,094 making Rogers Park one of Chicago's most densely populated areas. Chicagoans began to move to new planned communities in the north suburbs by the 1930s, which ushered in the migration of German, English, Irish, and Jewish families to Rogers Park. With the devastation in Europe following World War II, many additional immigrants found their way to Chicago and the Rogers Park neighborhood. A growing and vibrant Hispanic community has grown along Clark Street since 2000.

For decades, most of the neighborhood has been within the 49th Ward of the city of Chicago (the terms are sometimes used interchangeably), but that was a misconception. The ward covered much of Edgewater and went as far south as Hollywood in the 1960s, while the 50th Ward extended east to Ashland Avenue (in some areas as late as 1990). But, because of redistricting, a part of Rogers Park is now within the 40th Ward, and the 49th Ward now encompasses part of West Rogers Park.

The dominant educational institution in Rogers Park is Loyola University Chicago. Historic places of interest include Madonna Della Strada Chapel, the mother church of the Jesuit Province of Chicago (one of the largest Jesuit provinces). The neighborhood continues to be home to many Jesuit religious-order institutions. However, modern Rogers Park contains many different religious institutions. An example of the neighborhood's diversity is the historic Rogers Park Baptist Church.[8] Founded in 1891, this church has services in three languages every Sunday and is made up of immigrants from many countries.

The presence of its diverse array of students and academics from Loyola University Chicago and Northwestern University, just a few miles to the north, has historically lent Rogers Park a high degree of liberalism and tolerance. The community also has a high Internet presence.[9] In 2007, the Web site outside.in named Rogers Park one of the country's "bloggiest neighborhoods."[10]

Rogers Park has over 130 restaurants,[11] which are represented by the Rogers Park Chamber of Commerce and has been ranked "very walkable" by Walk Score.[12]

The predominant single-family housing stock in Rogers Park is the typical Chicago bungalow.[13]

The Artists of the Wall festival at the Lake Michigan shoreline at Farwell Avenue pier (Hartigan Park on the streetmap above) has been held for over twenty years, the longest event of its kind in Chicago's history.[14]

In 1993, Chicago's 24th Police District, which includes Rogers Park and the adjacent Chicago neighborhood of West Ridge, was selected as one of five police districts to pilot a new concept for Chicago law enforcement called Chicago Alternative Policing Strategy ("CAPS"). A merger of police and community efforts was implemented, which resulted in a noticeable effect on crime statistics. Weekly beat meetings (planning and strategy sessions) were held across the 24th Police District. All of Chicago's police districts put the strategy into practice by 1996.[15] Index crimes in the 24th police district fell by about half between 1996 and 2009.[16] According to an e-mail from 49th Ward Alderman Joe Moore, between January 1, 2013 and February 26, 2013, the 24th Police District was the only police district in Chicago in which no one was shot. In that same eight week period, the 24th District reported fewer crimes than all but one of Chicago's 22 police districts.[17] despite this there have been an uptick in shootings and killings in Rogers Park since 2013. http://homicides.redeyechicago.com/neighborhood/rogers-park/ 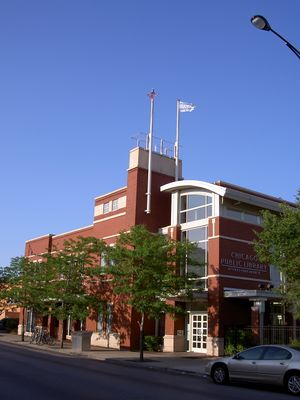 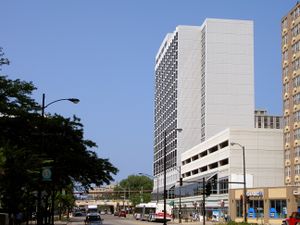 Rogers Park has four Red Line stations: Howard, Jarvis, Morse, and Loyola.[18] The Howard Street "L" station, the northernmost Chicago Transit Authority rail stop in the city, experienced major renovation from 2006 to 2009 and is a major transportation terminal for the northern Chicago region. Both the Yellow Line and the Purple Line begin in Rogers Park. In addition to the "L" lines, there are also several bus routes traveling to the Loop and the suburbs. They consist of the #22 Clark, #97 Skokie, #147 Outer Drive Express, #151 Sheridan and #201 Central/Ridge. There are also two buses that come from the north end of downtown down south Rogers Park on Devon, the #36 Broadway and the #155 Devon [1]. The Metra commuter railroad Rogers Park station, at the intersection of Lunt and Ravenswood Avenues, is centrally located in the Rogers Park neighborhood.

Rogers Park lies mainly within the 49th and 50th Wards. There are small areas that are within the 40th Ward.

Rogers Park is the setting for Chicago-based singer-songwriter Michael Smith's song Ballad of Elizabeth Dark, recorded in studio on his 1993 release Time and recorded live on his 2003 release, Such Things Are Finely Done.

Grammy-nominated Irish-American fiddler and composer Liz Carroll lived for a time in Rogers Park, and Rogers Park street names are referenced in the titles of her compositions the Morse Avenue reel, included on the Cherish the Ladies debut recording Irish Women Musicians in America on Schanachie, and The Greenleaf Strathsprey, included on the eponymous Liz Carroll on Green Linnet; both tunes are collected in her 2010 book Collected.[19]

When the sitcom Good Times came to its close in 1979, its central characters—The Evans Family—finally planned a move out of the Cabrini Green Housing Project and north to Rogers Park.[citation needed] 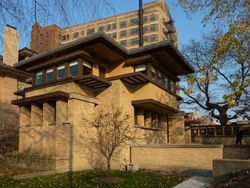 The Emil Bach House (1915), designed by Frank Lloyd Wright, was added to the National Register of Historic Places in 1979.