From Infogalactic: the planetary knowledge core
Jump to: navigation, search
This article is about the legendary figure. For other uses, see Roland (disambiguation). 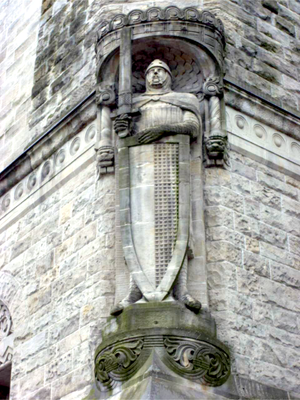 A statue of Roland at Metz railway station, France.

Roland (Frankish: Hruodland) (died 15 August 778) was a Frankish military leader under Charlemagne who became one of the principal figures in the literary cycle known as the Matter of France. The historical Roland was military governor of the Breton March, responsible for defending Francia's frontier against the Bretons. His only historical attestation is in Einhard's Vita Karoli Magni, which notes he was part of the Frankish rearguard killed by rebellious Basques in Iberia at the Battle of Roncevaux Pass.

The story of Roland's death at Roncevaux Pass was embellished in later medieval and Renaissance literature. He became the chief paladin of the emperor Charlemagne and a central figure in the legendary material surrounding him, collectively known as the Matter of France. The first and most famous of these epic treatments was the Old French Chanson de Roland of the eleventh century.

Two masterpieces of Italian Renaissance poetry, the Orlando innamorato and Orlando furioso, are even further detached from history than the earlier Chansons. Roland is poetically associated with his sword Durendal, his horse Veillantif, and his oliphant horn. 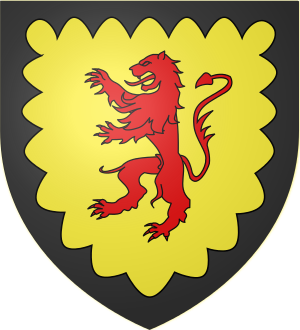 The only historical mention of the actual Roland is in the Vita Karoli Magni by Charlemagne's courtier and biographer Einhard. Einhard refers to him as Hruodlandus Brittannici limitis praefectus ("Roland, prefect of the borders of Brittany"), indicating he presided over the Breton March, Francia's border territory against the Bretons.[2] The passage, which appears in Chapter 9, mentions that Hroudlandus (a Latinization of the Frankish Hruodland) was among those killed in the battle:

While he was vigorously pursuing the Saxon war, almost without a break, and after he had placed garrisons at selected points along the border, [Charles] marched into Spain [in 778] with as large a force as he could mount. His army passed through the Pyrenees and [Charles] received the surrender of all the towns and fortified places he encountered. He was returning [to Francia] with his army safe and intact, but high in the Pyrenees on that return trip he briefly experienced the Basques. That place is so thoroughly covered with thick forest that it is the perfect spot for an ambush. [Charles's] army was forced by the narrow terrain to proceed in a long line and [it was at that spot], high on the mountain, that the Basques set their ambush. [...] The Basques had the advantage in this skirmish because of the lightness of their weapons and the nature of the terrain, whereas the Franks were disadvantaged by the heaviness of their arms and the unevenness of the land. Eggihard, the overseer of the king's table, Anselm, the count of the palace, and Roland, the lord of the Breton March, along with many others died in that skirmish. But this deed could not be avenged at that time, because the enemy had so dispersed after the attack that there was no indication as to where they could be found.[3]

Roland was evidently the first official appointed to direct Frankish policy in Breton affairs, as local Franks under the Merovingian dynasty had not previously pursued any specific relationship with the Bretons. Their frontier castle districts such as Vitré, Ille-et-Vilaine, south of Mont Saint-Michel, are now divided between Normandy and Brittany. The distinctive culture of this region preserves the present-day Gallo language and legends of local heroes such as Roland. Roland's successor in Brittania Nova was Guy of Nantes, who like Roland, was unable to exert Frankish expansion over Brittany and merely sustained a Breton presence in the Carolingian Empire.

According to legend, Roland was laid to rest in the basilica at Blaye, near Bordeaux, on the site of the citadel. 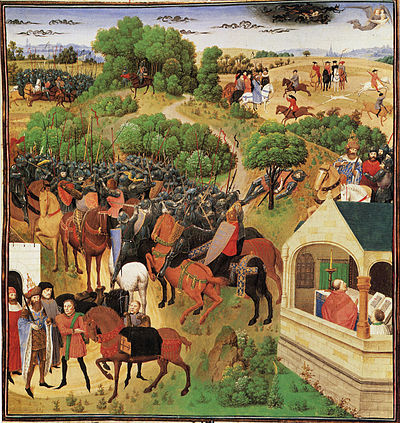 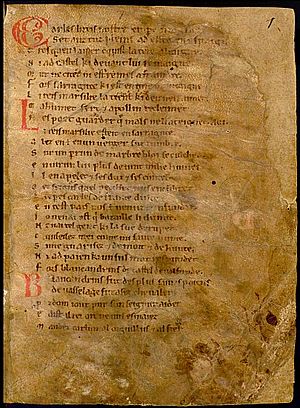 Composed in 1098, the first page of the Chanson de Roland (Song of Roland).

Roland was a popular legendary figure in medieval Europe. Over the next several centuries, Roland became an iconic figure in medieval minstrel culture. Many legends made him a nephew of Charlemagne (whether or not this was true is unknown), and turned his life into an epic tale of the noble Christian killed by Islamic forces, which forms part of the medieval Matter of France.

The tale of Roland's death is retold in the eleventh-century poem The Song of Roland, where he is equipped with the olifant (a signalling horn) and an unbreakable sword, enchanted by various Christian relics, named Durendal. The Song contains a highly romanticized and embellished account of the Battle of Roncevaux Pass and Roland's death, setting the tone for later fantastical depiction of Charlemagne's court.

It was adapted and modified throughout the Middle Ages, including an influential Latin prose version Historia Caroli Magni (also known as the Pseudo-Turpin Chronicle), which also includes Roland's battle with a Saracen giant named Ferracutus who is only vulnerable at his navel (the story was later adapted in the anonymous Franco-Venetian epic L'Entrée d'Espagne (c.1320) and in the 14th-century Italian epic La Spagna (attributed to the Florentine Sostegno di Zanobi and likely composed between 1350–1360).

Other texts give further legendary accounts of Roland's life. His friendship with Olivier and his engagement with Olivier's sister Aude are told in Girart de Vienne by Bertrand de Bar-sur-Aube. Roland's youth and the acquisition of his horse Veillantif and sword are described in Aspremont. Roland also appears in Quatre Fils Aymon where he is contrasted with Renaud de Montauban against whom he occasionally fights.

In Norway, the tales of Roland are part of the 13th century Karlamagnús saga.

In the Divine Comedy Dante sees Roland's spirit in the Heaven of Mars together with others who fought for the faith.

Roland appears in Entrée d'Espagne, a 14th-century Franco-Venetian chanson de geste (in which he is transformed into a knight errant, similar to heroes from the Arthurian romances) and La Spagna, a 14th-century Italian epic.

From the fifteenth century onwards, he appears as a central character in a sequence of Italian verse romances (as "Orlando"), including Morgante by Luigi Pulci, Orlando Innamorato by Matteo Maria Boiardo, and Orlando furioso by Ludovico Ariosto. (See below for his later history in Italian verse.) The Orlandino of Pietro Aretino then waxed satirical about the "cult of personality" of Orlando the hero.

In Germany, Roland gradually became a symbol of the independence of the growing cities from the local nobility. In the late Middle Ages many cities featured defiant statues of Roland in their marketplaces. The Roland in Wedel was erected in 1450 as symbol of market justice, and the Roland statue in front of Bremen City Hall (1404) has been listed together with the city hall itself on the UNESCO list of World Heritage Sites since 2004.

In Catalonia Roland (or Rotllà, as it is rendered in Catalan) became a legendary giant. Numerous places in Catalonia (both North and South) have a name related to Rotllà. In step with the trace left by the character in the whole Pyrenean area, Basque Errolan turns up in numerous legends and place-names associated with a mighty giant, usually a heathen, capable of launching huge stones. The Basque word erraldoi (giant) stems from Errol(d)an, as pointed by the linguist Koldo Mitxelena.[4]

More recently Roland's tale has been exploited by historians exploring the development of the early-modern Christian understanding of Islamic culture. In 1972 P. M. Holt used Roland's words to begin an essay about Henry Stubbe: "Paien ont tort e crestiien ont dreit" — "Pagans are in the wrong and Christians are in the right."

The Orlando narrative inspired several composers, amongst whom were Claudio Monteverdi, Jean-Baptiste Lully, Antonio Vivaldi and George Frideric Handel, who composed an Italian-language opera with Orlando.

The English expression, "to give a Roland for an Oliver", meaning either to offer a quid pro quo or to give as good as one gets, recalls the Chanson de Roland, and Roland's companion Oliver.[5]