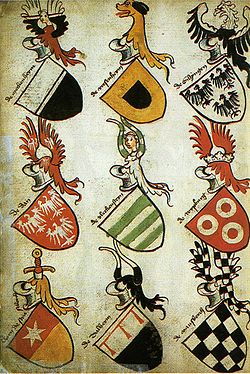 A roll of arms (or armorial) is a collection of coats of arms, usually consisting of rows of painted pictures of shields, each shield accompanied by the name of the person bearing the arms. A roll may also consist of blazons (verbal descriptions) rather than illustrations.

The heraldist Stephen Friar, writing in 1987,[1] classified rolls as follows:

A roll of arms arranged systematically by design, with coats featuring the same principal elements (geometrical ordinaries and charges) grouped together as a tool to aid identification, is known as an ordinary of arms (or simply as an ordinary). 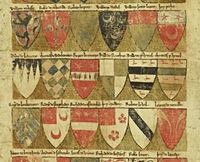