Established as the Diocese of Detroit on March 8, 1833, it was elevated to archiepiscopal status on May 22, 1937. Ste. Anne's in Detroit is the second oldest continuously-operating Roman Catholic Parish in the United States dating from July 26, 1701; it now serves a large Hispanic congregation.[5][6]

The Cathedral of the Most Blessed Sacrament in Detroit serves as the Archbishop's church. The cathedral is located at 9844 Woodward Avenue in Detroit, Michigan. 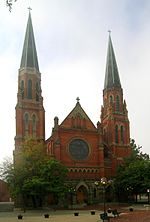 Ste. Anne de Détroit, founded in 1701, is the second oldest continuously operating Roman Catholic parish in the United States. The present church was completed in 1887.

Before the Diocese of Detroit was formed, Michigan had been under the ecclesiastical jurisdiction of the Diocese of Quebec from 1701 until sometime after 1796; de facto American sovereignty was established in that year. At the time, the Diocese of Baltimore encompassed the whole of the United States. Upon the creation of diocesan seats at Bardstown (1808) and later, at Cincinnati (1821), Detroit and Michigan were assigned to those sees. The Diocese of Detroit was formed on March 8, 1833, and its first bishop was Frederick Rese. At this time it covered Michigan, Wisconsin, Minnesota and the Dakotas to the Missouri River. In 1843 all the territory of the diocese that was not incorporated into the State of Michigan was transferred to the Diocese of Milwaukee.

On July 29, 1853 the Vicarate Apostolic of Upper Michigan was organized, with responsibility for the Upper Peninsula. The territory of the diocese would be further reduced to its current size by the organization of the dioceses of Grand Rapids (1882), Lansing (1937), and shortly after the see was elevated to the status of an archdiocese, Saginaw (1938).[1]

The son of Prussian Polish immigrants, Rev. John A. Lemke, born in Detroit on February 10, 1866, was the first native-born Roman Catholic priest of Polish descent to be ordained in America. He was baptized at St. Mary Roman Catholic Church (1843), at the corner of St. Antoine and Croghan (Monroe St.), on February 18, 1866, attended St. Albertus for his primary education, and studied at Detroit College (now the University of Detroit Mercy), where he received a bachelor's degree in 1884. After attending St. Mary's in Baltimore, he completed his theological studies at St. Francis Seminary in Monroe, Michigan, and he was ordained by Bishop John Samuel Foley in 1889. His added confirmation name was Aloysius.[7]

In January 1989, Cardinal Edmund Szoka implemented a controversial plan to close 30 churches within the city of Detroit. He also ordered 25 other parishes to improve their situation or also face closure.[8] The plan resulted from a five-year study which analyzed maintenance costs, priest availability, parish income and membership before recommending closure of 43 parishes.[9]

The Associationa of Religion Data Archives indicated a Catholic membership in the archdiocese of 907,605.[10]

On May 5, 2011, Archbishop Allen Vigneron announced that Pope Benedict XVI approved his request to name Saint Anne as patroness of Detroit. The Papal decree stated that Saint Anne has been the city's patroness since time immemorial.[11]

On February 21, 2012, Vigneron announced a second plan to consolidate churches to address declining membership and clergy availability within the archdiocese. Under the plan, two parishes will close in 2012 and 60 others will consolidate into 21 parishes by the end of 2013. Six additional parishes were asked to submit a viable plan to repay debt or merge with other churches and the remaining 214 parishes in the archdiocese were asked to submit plans by the end of 2012 to share resources or merge.[12] 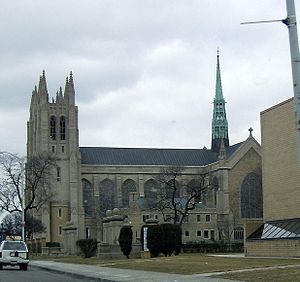 Cathedral of the Most Blessed Sacrament in Detroit

Coadjutor bishops (who did not become diocesan bishop)

Main article: List of schools in the Roman Catholic Archdiocese of Detroit

As of 2013 the Roman Catholic Archdiocese of Detroit had 96 schools with 30,000 students. As of 2013 there are four Catholic grade schools and three Catholic high schools in the City of Detroit, with all of them in the city's west side.[19]

In the 1964-1965 school year, there were 360 schools operated by the archdiocese, with about 110 grade schools in Detroit, Hamtramck, and Highland Park and 55 high schools in those three cities. There were a total of 203,000 students in the Catholic schools. The Catholic school population has decreased due to the increase of charter schools, increasing tuition at Catholic schools, the small number of African-American Catholics, White Catholics moving to suburbs, and the decreased number of teaching nuns.[19] 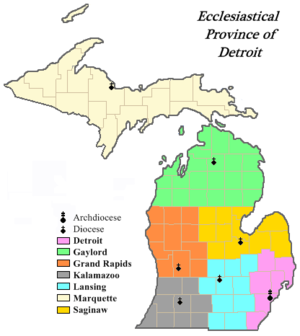