The Roman Catholic Diocese of Portsmouth is a Latin Church Roman Catholic diocese that covers the Channel Islands as well as parts of England (Hampshire, the Isle of Wight and parts of Berkshire, Dorset and Oxfordshire). The episcopal see is the Portsmouth Cathedral and is headed by the Bishop of Portsmouth. The diocese is part of the metropolitan Province of Southwark, which covers all of the far South of England as well as the Channel Islands.

The Diocese of Portsmouth, situated centrally within the Metropolitan Province of Southwark, extending as far as Abingdon in the North; and down to and including the Channel Islands in the South, and roughly from Liphook in the East to Andover in the West. The Diocese adjoins the dioceses of Birmingham and Northampton to the North, the diocese of Arundel & Brighton to the East and the dioceses of Plymouth and Clifton to the West. It officially comprises the counties of Hampshire, Berkshire (south of the Thames), Oxfordshire (south of the Thames), Dorset (the Bournemouth area), the Isle of Wight and the Channel Islands.

The area of the Diocese of Portsmouth is 6,339 km2 (2,447sq Miles) and has a total population (2001 census) of 2,960,077. Its estimated Catholic population (2004) is 167,000. There are 112 parishes (2005) and 128 incardinated priests, with a further 86 from religious orders, congregations & societies. There are also 31 permanent deacons serving in the parishes plus 101 professed non-priest religious and 255 professed women religious. Education comprises 48 primary/middle/ecumenical schools (aided and grant maintained), 8 secondary and 24 independent schools. 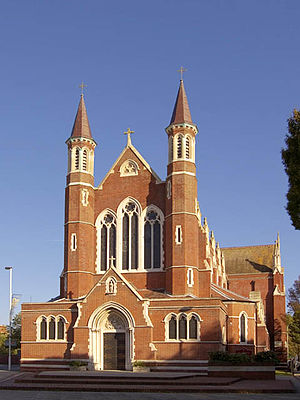 By a Papal Brief dated 19 May 1882, Pope Leo XIII created the Diocese of Portsmouth. It was formed out of the western portion of the Diocese of Southwark, as constituted at the re-establishment of the hierarchy in 1850. The Southwark diocese had become too large for one Bishop, extending as it did from London to Bournemouth and from the outskirts of Oxford to Dover and including the Channel Islands.

The new diocese comprised the counties of Hampshire, the Isle of Wight, Berkshire, and the Channel Islands. It was thus almost co-terminous with the limits of the Diocese of Winchester. The obvious place for the cathedral and curia of the new diocese was Winchester. The Ecclesiastical Titles Act forbade a Catholic diocese to have the same name as an Anglican see. It would appear that the original intention was to fix the see at Southampton, with St Joseph Church in Bugle Street as the pro-cathedral. The construction of a large parish church in the centre of Portsmouth had begun, and it was decided to make it the future cathedral of the diocese.[1]

Dr. John Vertue (1826–1900) was appointed the first bishop of the new diocese. He was consecrated by Cardinal Manning on 25 July 1882 and on 10 August of that year opened the Cathedral of St John the Evangelist at Portsmouth. When the new Bishop took possession of his see, there were fifty-five public chapels and forty-nine priests in the diocese.[citation needed]

On Tuesday, 11 July 2012, Bishop Egan's appointment as the Eighth Bishop of Portsmouth was announced in an official press release from the Vatican Information Service (VIS), an arm of the Holy See Press Office. At the time of his appointment Bishop Egan was serving as the Vicar General of the Diocese of Shrewsbury.[2] Bishop Egan's Episcopal Ordination took place at St John’s Cathedral, Portsmouth on Monday 24 September 2012, the Feast of Our Lady of Walsingham.[3]

Bishop Egan was born on 14 November 1955, in Altrincham, a suburb of Manchester. After classical studies locally at St. Ambrose College and at King's College London, he completed training for the priesthood at Allen Hall, Westminster, and at the Venerable English College in Rome. On 4 August 1984, he was ordained to the priesthood for the Diocese of Shrewsbury. From 1984 to 1988, Egan served as parochial vicar at St. Anthony's, Woodehouse Park, Manchester. From 1988 to 1991, he served as an assistant chaplain at the University of Cambridge. From 1991 to 1994, he served as parish vicar and chaplain at Arrowe Park Hospital on the Wirral. From 1994 to 1995, he completed theological studies at Boston College in the United States, going on to serve, until 2007, as a Professor of Fundamental Theology and Dean of Studies at Oscott College seminary in Birmingham. In 2007–2008, also in Boston he attended Lonergan Post Doctoral Fellowship Studies. In 2008, Egan became parish priest of Our Lady and St Christopher's in Stockport. In 2010, he was named to his previous post as Vicar General of the Diocese of Shrewsbury.

The Right Reverend Roger Francis Crispian Hollis, bishop emeritus of Portsmouth, was educated at Stonyhurst College and ordained on 11 July 1965.

He reached the standard retirement age of 75 in November 2011.

On Tuesday, 11 July 2012, the acceptance of his resignation was announced in an official press release from the Vatican Information Service (VIS), an arm of the Holy See Press Office.[2]

Other Notables of Diocese

Moderator for the Curia

Chancellor for the Diocese

Following a long period of consultation, the Diocese's new pastoral areas were launched at the time of Pentecost in 2006, with the aim to eventually turning them into parishes in the future. There were originally 24 pastoral areas. There are now 22. Deaneries were re-introduced in September 2014.

The Pastoral Areas with their respective parishes are, as of September 2014:

Deaneries used to be used in the Diocese of Portsmouth, until pastoral areas were created to replace them. In 2005, they originally were: Portsmouth, Aldershot, Alton, Basingstoke, Bournemouth, Fareham, Havant, New Forest, Southampton, Winchester, North East Berks, South Berks, Kennet Valley, Vale of the White Horse, Reading, Isle of Wight, Guernsey and Jersey.

The Portsmouth Diocese is part of the Catholic Association Pilgrimage.