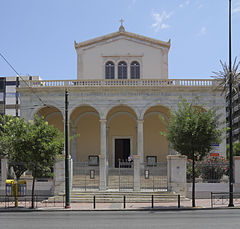 Cathedral Basilica of St. Dionysius the Areopagite in Athens.

Indigenous Roman Catholic Greeks number about 50,000[1] and are a religious and not an ethnic minority. Most of them are either descendants of the Venetians and Genoese that ruled many Greek islands (in both the Aegean and Ionian seas) from the early 13th until the late 18th century, or descendants of the thousands of Bavarians that came to Greece in the 1830s as soldiers and civil administrators, accompanying King Otto. One very old but still common term to refer to them is Φράγκοι, or "Franks", dating to the times of the Byzantine Empire, when medieval Greeks would use that term to describe all Catholics.

Since the early 1990s however, the number of Catholic permanent residents of Greece has greatly increased; today, they number 200,000 at the very least, and probably more.[1] These Catholics are immigrants from Eastern Europe (especially Poland) or from the Philippines, but also include Western European expatriates that live permanently in Athens or the Greek Islands (especially Crete, Rhodes and Corfu).

In addition to the Catholics of the Latin Rite who represent the vast majority of the faithful, there are about 5,000 of the Greek Rite,[1] and a few hundred Armenian Catholics.

Today, the majority of Catholics live in Athens, a city of about four million people; the rest of them can be found all over Greece. Most indigenous Catholics live in the islands, and especially the Cyclades, where Syros and Tinos in particular have some entirely Catholic villages and parishes. There are also Catholics in Corfu, Naxos, Santorini, Cefalonia, Zakynthos, Rhodes, Kos, Crete, Samos and Chios. In the mainland, Catholic communities are smaller, and include those of Patras (a city that was home to a large Italian community until World War II), Thessaloniki, Kavala, Volos etc.