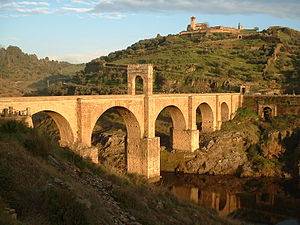 The Alcántara Bridge, Spain, a masterpiece of ancient bridge building

Roman bridges, built by ancient Romans, were the first large and lasting bridges built.[1] Roman bridges were built with stone and had the arch as the basic structure (see arch bridge). Most utilized concrete as well, which the Romans were the first to use for bridges. 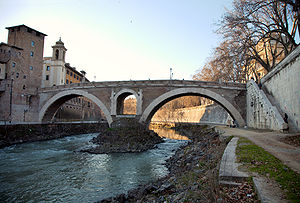 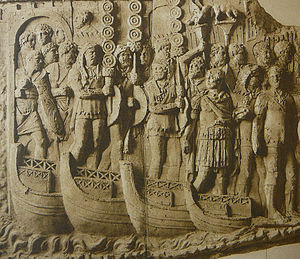 As with the vault and the dome the Romans were the first to fully realize the potential of arches for bridge construction.[3]

A list of Roman bridges compiled by the engineer Colin O'Connor features 330 Roman stone bridges for traffic, 34 Roman timber bridges and 54 Roman aqueduct bridges, a substantial part still standing and even used to carry vehicles.[4] A more complete survey by the Italian scholar Vittorio Galliazzo found 931 Roman bridges, mostly of stone, in as many as 26 different countries (including former Yugoslavia; see right table).[5]

Roman arch bridges were usually semicircular, although a few were segmental (such as Alconétar Bridge). A segmental arch is an arch that is less than a semicircle.[6] The advantages of the segmental arch bridge were that it allowed great amounts of flood water to pass under it, which would prevent the bridge from being swept away during floods and the bridge itself could be more lightweight. Generally, Roman bridges featured wedge-shaped primary arch stones (voussoirs) of the same in size and shape. The Romans built both single spans and lengthy multiple arch aqueducts, such as the Pont du Gard and Segovia Aqueduct. Their bridges featured from an early time onwards flood openings in the piers, e.g. in the Pons Fabricius in Rome (62 BC), one of the world's oldest major bridges still standing. Roman engineers were the first and until the industrial revolution the only ones to construct bridges with concrete, which they called Opus caementicium. The outside was usually covered with brick or ashlar, as in the Alcántara bridge.

The Romans also introduced segmental arch bridges into bridge construction. The 330 m long Limyra Bridge in southwestern Turkey features 26 segmental arches with an average span-to-rise ratio of 5.3:1,[7] giving the bridge an unusually flat profile unsurpassed for more than a millennium. Trajan's bridge over the Danube featured open-spandrel segmental arches made of wood (standing on 40 m high concrete piers). This was to be the longest arch bridge for a thousand years both in terms of overall and individual span length, while the longest extant Roman bridge is the 790 m long Puente Romano at Mérida.

Early Roman arch bridges, influenced by the ancient notion of the ideal form of the circle, often describe a full circle, with the stone arch continuing underground. A typical example is the Pons Fabricius in Rome. Later, Roman masonry bridges rested mostly on semi-circular arches, or, to a lesser extent, on segmental arches.[9][10] For the later design, which shows an early, local concentration in north-eastern Italy, but can be found scattered throughout the whole empire, the Limyra Bridge, the Alconétar Bridge and the Ponte San Lorenzo are prime examples. In addition, a number of other arch forms make rare appearances, in some cases of which later deformations cannot be ruled out. The late antique Karamagara Bridge represents an early example for the use of pointed arches 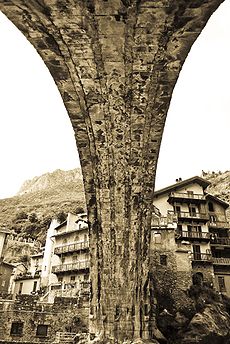 The largest Roman bridge was Trajan's bridge over the lower Danube, constructed by Apollodorus of Damascus, which remained for over a millennium the longest bridge to have been built both in terms of overall and span length. They were most of the time at least 2 metres above the body of water.

An example of temporary military bridge construction are the two Caesar's Rhine bridges.

Roman engineers built stone arch or stone pillar bridges over all major rivers of their Imperium, save two: the Euphrates which lay at the frontier to the rival Iranian empires, and the Nile, the longest river in the world, which was 'bridged' as late as 1902 by the British Old Aswan Dam.[11]

The largest rivers to be spanned by solid bridges by the Romans were the Danube and the Rhine, the two largest European rivers west of the Eurasian Steppe. The lower Danube was crossed by least two (Trajan's Bridge, Constantine's Bridge) and the middle and lower Rhine by four different bridges (Roman Bridge at Mainz, Caesar's Rhine bridges, Roman Bridge at Koblenz, Roman Bridge at Cologne). For rivers with strong currents and to allow swift army movements, pontoon bridges were also routinely employed.[12] Going from the distinct lack of records of pre-modern solid bridges spanning larger rivers,[13] the Roman feat appears to be unsurpassed anywhere in the world until into the 19th century.