In the Roman Republic, the dictatorship was an "extraordinary magistrate" (magistratus extraordinarius) with the absolute authority to perform tasks beyond the authority of the ordinary magistrate (magistratus ordinarius).[1] The office of dictator was a legal innovation originally named Magister Populi (Master of the People), i.e., Master of the Citizen Army.[2] The term was derived from dicto to dictate or prescribe.

The Roman Senate passed a senatus consultum authorizing the consuls to nominate a dictator — the sole exception to the Roman legal principles of collegiality (multiple tenants in the same office) and responsibility (legal liability for official actions) — only one man was appointed, and, as the highest magistrate, he was not legally liable for official actions; 24 lictors attended him. Only a single dictator was allowed, because of the imperium magnum, the great, extraordinary power with which he could over-rule, or depose from office, or put to death other curule magistrates, who also possessed imperium.

There were several forms of dictator, distinguished by their causa, or reason for their creation. The most common form, and the one most associated with the Roman dictator, was rei gerundae causa, "for the matter to be done", which almost always involved leading an army in the field and specified the enemy to be combated. At least one dictator (and possibly more) was designated seditionis sedandae et rei gerundae causa, "for the putting down of rebellion and the matter to be done". Dictators were also appointed to serve administrative or religious functions, such as holding elections (comitiorum habendorum causa, the second most common form of dictatorship) or driving a nail into the Temple of Jupiter Optimus Maximus to end a pestilence (clavi figendi causa).

Rome ceased to appoint dictators after the time of the Second Punic War. The office was revived during the Roman Civil War by Lucius Cornelius Sulla Felix, who was appointed dictator legibus faciendis et rei publicae constituendae causa (dictator for the making of laws and for the settling of the constitution).[citation needed] Julius Caesar was also named dictator on several occasions. The Roman emperors eschewed use of the title to avoid the shameful connotations it attracted as the result of these last two dictators.

As soon as the Dictator was appointed, he became the chief executive and commander-in-chief of the Republic.[citation needed] The regular magistrates – with the exception of the Tribune of the Plebs – became subject to the higher imperium of the Dictator. They continued to discharge the duties of their various offices under the Dictator, but they were no longer independent officers and were obliged to obey his orders in every circumstance. Failure to do so could result in the dictator forcing the magistrate out of office.

The superiority of the Dictator's power to that of the consuls consisted chiefly of greater independence from the Senate, more extensive power of punishment without a trial by the people, and complete immunity from being held accountable for his actions. However, what gave the dictator such great control over Rome was his lack of a colleague to counter him. Unlike the Consuls, who were required to cooperate with the Senate, the Dictator could act on his own authority without the Senate, though the Dictator would usually act in unison with the Senate all the same. There was no appeal from the sentence of the Dictator (unless the dictator changed his mind), and accordingly the lictors bore the axes in the fasces before them, even in the city, as a symbol of their absolute power over the lives of the citizens.

The Dictator's imperium granted him the powers to rule by decree and to change any Roman law as he saw fit, and these changes lasted as long as the Dictator remained in power. He could introduce new laws into the Roman constitution that did not require ratification by any of the Roman assemblies, but were often put to a vote all the same. An example would be Sulla's introduction of the dreaded proscription. Likewise, a dictator could act as a supreme judge, with no appeal to his decisions. These judicial powers made the Dictator the supreme authority in both military and civil affairs.

The relationship between the Dictator and the Tribunes of the Plebs is not entirely certain. The Tribune was the only magistrate to continue his independence of office during a dictatorship while the other magistrates served the dictator as officers. However, there is no reason to believe that they had any control over a dictator, or could hamper his proceedings by their power to veto, as they could in the case of the Consuls. This is believed to be explained by the fact that the law that created the dictatorship was passed before the institution of the Tribune of the Plebs, and consequently made no mention of it.

Any magistrate owning imperium was not accountable for his actions as long as he continued to serve in an office that owned imperium. However, once a magistrate left office, he could face trial for his illegal deeds after the imperium had expired. This was not the case with the Dictator. The Dictator was untouchable during his time in office, but was also not liable to be called to account for any of his official acts, illegal or otherwise, after his abdication of office. The dictator's actions were treated as though they never occurred (at least legally).

Dictators were only appointed so long as the Romans had to carry on wars in Italy. A solitary instance occurs in the First Punic War of the nomination of a dictator (Aulus Atilius Calatinus), for the purpose of carrying on war outside of Italy; but this was never repeated, because it was feared that so great a power might become dangerous at a distance from Rome. But after the Battle of Trasimene in 217 BC, when Rome itself was threatened by Hannibal, a Dictator was again needed, and Fabius Maximus was appointed to the office.

In the next year, 216 BC, after the battle of Cannae, Marcus Junius Pera was also nominated Dictator, but this was the last time of the appointment of a Dictator rei gerundae causa. From 202 BC on, the dictatorship disappears altogether. It was replaced by the Senatus consultum ultimum, an emergency act of the Senate that authorized the two consuls to take whatever actions were needed to defend the Republic. The best known dictatores rei gerundae causa were Fabius Maximus (during the Second Punic War) and Cincinnatus.

A new dictatorate and abolition 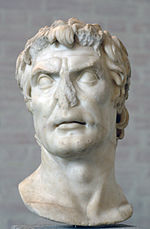 In 82 BC, after a 120-year lapse, and the end of the civil war between the forces of Marius and Sulla, the latter was appointed by the Senate to an entirely new office, dictator legibus faciendis et rei publicae constituendae ("dictator for the making of laws and for the settling of the constitution"). This new office was functionally identical to the dictatorate rei gerundae causa except that it lacked any set time limit. Sulla held this office for about a year before he abdicated and retired from public life.

Gaius Julius Caesar subsequently resurrected the dictatorate rei gerundae causa in his first dictatorship, then modified it to a full year term. He was appointed dictator rei gerundae causa for a full year in 46 BC and then designated for nine consecutive one-year terms in that office thereafter, functionally becoming dictator for ten years. A year later, this pretense was discarded altogether and the Senate voted to make him Dictator perpetuo (usually rendered in English as "dictator for life", but properly meaning "dictator in perpetuity"). Neither the magistrate who nominated Sulla, the time for which he was appointed, nor the extent or exercise of his power was in accordance with the ancient laws and precedents, as is the case[clarification needed] with the dictatorship of Caesar.

After Caesar's murder on the Ides of March, his consular colleague Mark Antony introduced the lex Antonia, which abolished the dictatorship. The office was later offered to Augustus, who declined it, and opted instead for tribunician power and consular imperium without holding any magisterial office other than imperator and princeps Senatus — a politic arrangement which left him as functional dictator without having to hold the controversial title. This novel – though only slightly unconstitutional[3] – arrangement of offices and powers would in time evolve into the office of Roman Emperor. Thus, dictatorship, as defined by the republican institution, was not a feature of the principate or dominate.

Other types of dictators were occasionally appointed for more mundane reasons: comitiorum habendorum causa (for summoning the comitia for elections), clavi figendi causa (for fixing the clavus annalis in the temple of Jupiter), feriarum constituendarum causa (for appointing holidays), ludorum faciendorum causa (for officiating at public games), quaestionibus exercendis (for holding certain trials), and legendo senatui (for filling vacancies in the Senate).