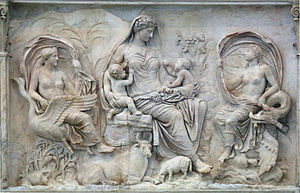 Allegorical scene from the Augustan Ara Pacis, 13 BCE, a highpoint of the state Greco-Roman style.

The study of Roman sculpture is complicated by its relation to Greek sculpture. Many examples of even the most famous Greek sculptures, such as the Apollo Belvedere and Barberini Faun, are known only from Roman Imperial or Hellenistic "copies." At one time, this imitation was taken by art historians as indicating a narrowness of the Roman artistic imagination, but in the late 20th-century, Roman art began to be reevaluated on its own terms: some impressions of the nature of Greek sculpture may in fact be based on Roman artistry.

The strengths of Roman sculpture are in portraiture, where they were less concerned with the ideal than the Greeks or Ancient Egyptians, and produced very characterful works, and in narrative relief scenes. Examples of Roman sculpture are abundantly preserved, in total contrast to Roman painting, which was very widely practiced but has almost all been lost. Latin and some Greek authors, particularly Pliny the Elder in Book 34 of his Natural History, describe statues, and a few of these descriptions match extant works. While a great deal of Roman sculpture survives more or less intact, it is often damaged or fragmentary. 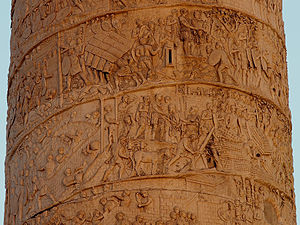 Section of Trajan's Column, CE 113, with scenes from the Dacian Wars

Early Roman art was influenced by the art of Greece and that of the neighbouring Etruscans, themselves greatly influenced by their Greek trading partners. An Etruscan speciality was near life size tomb effigies in terracotta, usually lying on top of a sarcophagus lid propped up on one elbow in the pose of a diner in that period. As the expanding Roman Republic began to conquer Greek territory, at first in Southern Italy and then the entire Hellenistic world except for the Parthian far east, official and patrician sculpture became largely an extension of the Hellenistic style, from which specifically Roman elements are hard to disentangle, especially as so much Greek sculpture survives only in copies of the Roman period.[1] By the 2nd century BCE, "most of the sculptors working at Rome" were Greek,[2] often enslaved in conquests such as that of Corinth (146 BCE), and sculptors continued to be mostly Greeks, often slaves, whose names are very rarely recorded. Vast numbers of Greek statues were imported to Rome, whether as booty or the result of extortion or commerce, and temples were often decorated with re-used Greek works.[3]

A native Italian style can be seen in the tomb monuments of prosperous middle-class Romans, which very often featured portrait busts, and portraiture is arguably the main strength of Roman sculpture. There are no survivals from the tradition of masks of ancestors that were worn in processions at the funerals of the great families and otherwise displayed in the home, but many of the busts that survive must represent ancestral figures, perhaps from the large family tombs like the Tomb of the Scipios or the later mausolea outside the city. The famous bronze head supposedly of Lucius Junius Brutus is very variously dated, but taken as a very rare survival of Italic style under the Republic, in the preferred medium of bronze.[4] Similarly stern and forceful heads are seen in the coins of the consuls, and in the Imperial period coins as well as busts sent around the Empire to be placed in the basilicas of provincial cities were the main visual form of imperial propaganda; even Londinium had a near-colossal statue of Nero, though far smaller than the 30 metre high Colossus of Nero in Rome, now lost.[5] The Tomb of Eurysaces the Baker, a successful freedman (c. 50-20 BC) has a frieze that is an unusually large example of the "plebeian" style.[6] 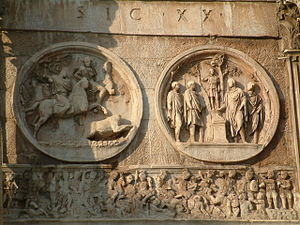 Arch of Constantine, 315: Hadrian lion-hunting (left) and sacrificing (right), above a section of the Constantinian frieze, showing the contrast of styles.

The Romans did not generally attempt to compete with free-standing Greek works of heroic exploits from history or mythology, but from early on produced historical works in relief, culminating in the great Roman triumphal columns with continuous narrative reliefs winding around them, of which those commemorating Trajan (CE 113) and Marcus Aurelius (by 193) survive in Rome, where the Ara Pacis ("Altar of Peace", 13 BCE) represents the official Greco-Roman style at its most classical and refined. Among other major examples are the earlier re-used reliefs on the Arch of Constantine and the base of the Column of Antoninus Pius (161),[7] Campana reliefs were cheaper pottery versions of marble reliefs and the taste for relief was from the imperial period expanded to the sarcophagus.

All forms of luxury small sculpture continued to be patronized, and quality could be extremely high, as in the silver Warren Cup, glass Lycurgus Cup, and large cameos like the Gemma Augustea, Gonzaga Cameo and the "Great Cameo of France".[8] For a much wider section of the population, moulded relief decoration of pottery vessels and small figurines were produced in great quantity and often considerable quality.[9]

After moving through a late 2nd century "baroque" phase,[10] in the 3rd century, Roman art largely abandoned, or simply became unable to produce, sculpture in the classical tradition, a change whose causes remain much discussed. Even the most important imperial monuments now showed stumpy, large-eyed figures in a harsh frontal style, in simple compositions emphasizing power at the expense of grace. The contrast is famously illustrated in the Arch of Constantine of 315 in Rome, which combines sections in the new style with roundels in the earlier full Greco-Roman style taken from elsewhere, and the Four Tetrarchs (c. 305) from the new capital of Constantinople, now in Venice. Ernst Kitzinger found in both monuments the same "stubby proportions, angular movements, an ordering of parts through symmetry and repetition and a rendering of features and drapery folds through incisions rather than modelling... The hallmark of the style wherever it appears consists of an emphatic hardness, heaviness and angularity — in short, an almost complete rejection of the classical tradition".[11]

This revolution in style shortly preceded the period in which Christianity was adopted by the Roman state and the great majority of the people, leading to the end of large religious sculpture, with large statues now only used for emperors, as in the famous fragments of a colossal acrolithic statue of Constantine, and the 4th or 5th century Colossus of Barletta. However rich Christians continued to commission reliefs for sarcophagi, as in the Sarcophagus of Junius Bassus, and very small sculpture, especially in ivory, was continued by Christians, building on the style of the consular diptych.[12] 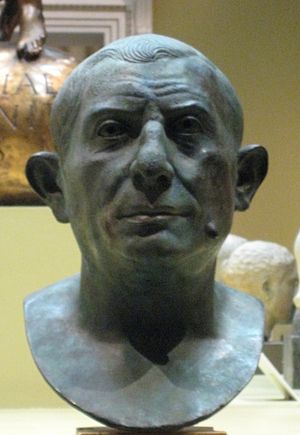 Roman portraiture is characterized by its "warts and all" realism. 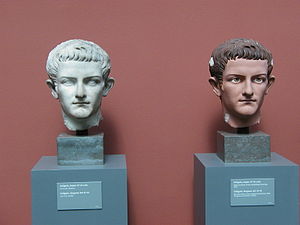 Marble bust of Caligula, Roman emperor AD 37–41, with traces of original paint beside a plaster replica trying to recreate the polychrome traditions of ancient sculpture. Exhibition in Ny Carlsberg Glyptotek in Copenhagen, Denmark. 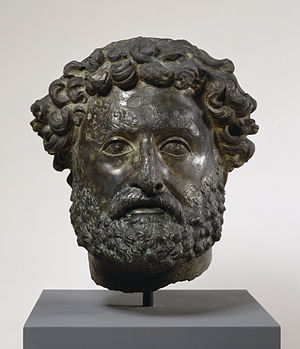 This private portrait of a Roman man shows both individualized and unforgiving naturalism with the evident stylized influence of emperors Hadrian and Antoninus Pius in his beard and hairstyle. Walters Art Museum, Baltimore.
Main article: Roman portraiture

Portraiture is a dominant genre of Roman sculpture, growing perhaps from the traditional Roman emphasis on family and ancestors; the entrance hall (atrium) of a Roman elite house displayed ancestral portrait busts. During the Roman Republic, it was considered a sign of character not to gloss over physical imperfections, and to depict men in particular as rugged and unconcerned with vanity: the portrait was a map of experience. During the Imperial era, more idealized statues of Roman emperors became ubiquitous, particularly in connection with the state religion of Rome. Tombstones of even the modestly rich middle class sometimes exhibit portraits of the otherwise unknown deceased carved in relief.

Among the many museums with examples of Roman portrait sculpture, the collections of the Metropolitan Museum of Art in New York and the British Museum in London are especially noteworthy.

Religious art was also a major form of Roman sculpture. A central feature of a Roman temple was the cult statue of the deity, who was regarded as "housed" there (see aedes). Although images of deities were also displayed in private gardens and parks, the most magnificent of the surviving statues appear to have been cult images. Roman altars were usually rather modest and plain, but some Imperial examples are modeled after Greek practice with elaborate reliefs, most famously the Ara Pacis, which has been called "the most representative work of Augustan art."[13] Small statuettes, executed with varying degrees of artistic competence, are plentiful in the archaeological record, particularly in the provinces, and indicate that these art objects were a continual presence in the lives of Romans, whether for dedicating at a temple or for private devotional display at home or in neighborhood shrines.

Roman sarcophagi, mainly dating from the 1st to the 4th centuries CE, offer examples of intricate reliefs that depict scenes often based on Greek and Roman mythology or mystery religions that offered personal salvation, and allegorical representations. Roman funerary art also offers a variety of scenes from everyday life, such as game-playing, hunting, and military endeavors.

A number of well-known large stone vases sculpted in relief from the Imperial period were apparently mostly used as garden ornaments; indeed many statues were also placed in gardens, both public and private. Sculptures recovered from the site of the Gardens of Sallust, opened to the public by Tiberius, include:

Roman baths were another site for sculpture; among the well-known pieces recovered from the Baths of Caracalla are the Farnese Bull and Farnese Hercules and over life-size early 3rd century patriotic figures somewhat reminiscent of Soviet Social Realist works (now in the Museo di Capodimonte, Naples).

Found in the Gardens of Sallust 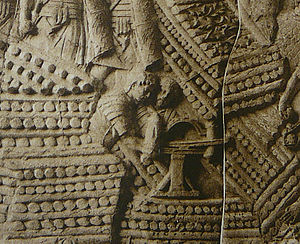 Detail from Trajan's column with ballista

Scenes shown on reliefs such as that of Trajan's column and those shown on sarcophogi reveal images of Roman technology now long lost, such as ballistae and the use of waterwheel-driven saws for cutting stone. The latter was only recently discovered at Hieropolis and commemorates the miller who used the machine. Other reliefs show harvesting machines, much as they were described by Pliny the Elder in his Naturalis Historia.

The architectural writer Vitruvius is oddly reticent on the architectural use of sculpture, mentioning only a few examples, though he says that an architect should be able to explain the meaning of architectural ornament and gives as an example the use of caryatids.[15]