The Land Forces, Air Force and Naval Forces of Romania are collectively known as the Romanian Armed Forces (Romanian: Forțele Armate Române or Armata Română) . The current Commander-in-chief is General Nicolae Ionel Ciuca who is managed by the Minister of National Defence while the president is the Supreme Commander of the Armed Forces during wartime.

The Land Forces have overhauled their equipment in recent years, and are today a modern army with multiple NATO capabilities. They are participating in a peacekeeping mission in Afghanistan, together with the other NATO countries. The Air Force currently operates modernized Soviet MiG-21 LanceR fighters, which are due to be replaced by modernized ex-Portuguese F-16 fighters by 2016. In the first stage a first squadron of 12 fighter aircraft will be acquired and a second squadron of another 12 aircraft [8][9] will follow by 2020. The Air Force has also received 7 new C-27J Spartan tactical airlift aircraft, in order to replace the bulk of the old transport force.[10] Two modernized ex-Royal Navy Type 22 frigates were acquired by the Naval Forces in 2004 and a further four modern missile corvettes will be commissioned in the next few years. Three domestically-produced IAR 330 Puma NAVAL helicopters were also ordered by the Naval Forces, and were commissioned in late 2008.

Romania joined NATO in 2004. As a consequence, extensive preparations were made to abolish conscription by 2007 and create a professional army in place of a conscripted one.

The Romanian Military will essentially undergo a three-stage restructuring. As of 2007, the first short-term stage has been completed. 2015 marks the end of the second stage when the armed forces will reach a superior compatibility with NATO forces.[13] In 2025, the long-term stage is to be completed. The stages aim at modernising the structure of the armed forces, reducing the personnel as well as acquiring newer and more improved technology that is compatible with NATO standards.[13] 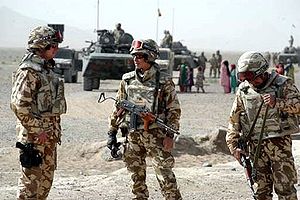 Romanian troops participated in the occupation of Iraq, reaching a peak of 730 soldiers before being slowly drawn down to 350 soldiers. Romania terminated its mission in Iraq and withdrew its last troops on July 24, 2009.

Romania currently has troops deployed in Afghanistan, and is planning to nearly double its troop strength there to 1,800 by September 2010, according to an announcement made by President Traian Basescu in Prague on April 8, 2010.[14] 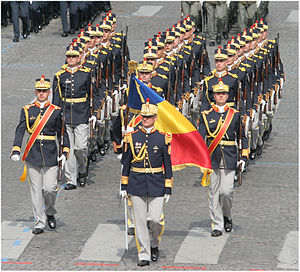 The following Romanian institutions have military status but are not part of the Armed Forces:

Officers
Note that those in parentheses are ranks formerly used (stated in italic) or former rank names or literal rank meanings.

Officers
Note that those in parentheses are ranks formerly used (as stated) or former rank names or literal rank meanings.