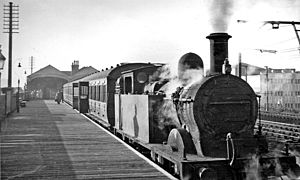 Platform 1 (for Upminster services) pictured in 1950

Romford railway station is an interchange station on the Great Eastern Main Line, serving the town of Romford in the London Borough of Havering, east London. It is 12 miles 30 chains (19.9 km) down line from London Liverpool Street and is situated between Chadwell Heath and Gidea Park. Its three-letter station code is RMF and it is in Travelcard Zone 6.[3]

The station was opened in 1839 by the Eastern Counties Railway. It is currently managed by TfL Rail. The majority of services call at Romford as part of the Shenfield-Liverpool Street service operated by TfL Rail, but the station is also served by some Abellio Greater Anglia trains to and from Southend Victoria and Colchester Town. The Romford to Upminster Line on London Overground links Romford to Upminster. From 2019, Romford will be fully served by Crossrail, linking it to additional stations in central London as well as Reading and London Heathrow Airport.[4] TfL Rail, the precursor of Crossrail, took over the running of the Shenfield "metro" on 31 May 2015.

Romford station opened on 20 June 1839 as the eastern terminus of the Eastern Counties Railway from Mile End. Both stations acted as temporary termini, with the line extending east to Brentwood and west to Bishopsgate (Low Level) in 1840. On 7 June 1893 the London, Tilbury and Southend Railway opened a second station in Romford, on a branch line to Upminster. The two stations were combined in 1934.

In May 2015 the Upminster branch Iine transferred from Abellio Greater Anglia to London Overground and the regular Shenfield "metro" service transferred to TfL Rail.[5][6]

Crossrail will partially open in 2017, with the full route to Reading and London Heathrow Airport opening in 2019.[9]

The typical off-peak service from the station is:[10]

Sunday services are typically as follows:

In 2017 new Class 345 trains will enter service as Crossrail partially opens. The route will be extended through central London to London Heathrow Airport and Reading in 2019. Platforms 2 to 5 will be extended from their current length of between 179 metres (196 yd) and 182 metres (199 yd) to accommodate the Crossrail trains which will be over 200 metres (220 yd) long. New lifts, signage, help points, customer information screens and CCTV will also be installed.