Ronald Ellwin "Ron" Evans, Jr. (November 10, 1933 – April 7, 1990), (Capt, USN), was an American naval officer and aviator, electrical engineer, aeronautical engineer, and NASA astronaut, also one of only 24 people to have flown to the Moon.

Evans was selected as an astronaut by NASA as part of Astronaut Group 5 in 1966 and made his first and only flight into space as Command Module Pilot aboard Apollo 17 in 1972, the last manned mission to the Moon to date, with Commander Eugene Cernan and Lunar Module Pilot Harrison Schmitt. During the flight, he orbited the Moon as his two crewmates descended to the surface. Consequently, he is the last person to orbit the Moon alone. In 1975 Evans served as backup Command Module Pilot for the Apollo-Soyuz Test Project mission.

Evans was born on November 10, 1933, in St. Francis, Kansas. He was active in the Boy Scouts of America where he achieved its second highest rank, Life Scout. He graduated from Highland Park High School in Topeka, Kansas, received a Bachelor of Science degree in Electrical Engineering from the University of Kansas in 1956, and a Master of Science degree in Aeronautical Engineering from the U.S. Naval Postgraduate School in 1964. He was a member of Tau Beta Pi, Society of Sigma Xi, and Sigma Nu.

In June 1957 he completed flight training after receiving his commission as an Ensign through the Navy ROTC Program at the University of Kansas. When notified of his selection to the astronaut program, Evans was on sea duty in the Pacific, assigned to VF-51 and flying F-8 Crusader aircraft from the carrier USS Ticonderoga during a period of seven months in Vietnam War combat operations.

The total flight time accrued during his career was 5,100 hours, including 4,600 hours in jet aircraft. 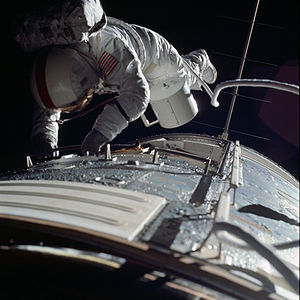 Evans during his trans-Earth EVA on Apollo 17

Evans was one of the 19 astronauts selected by NASA in April 1966. He served as a member of the astronaut support crews for the Apollo 7 and Apollo 11 flights, and as backup Command Module Pilot for Apollo 14.

Evans' first and only space flight was as Command Module Pilot of Apollo 17, the last scheduled U.S. manned mission to the Moon. He was accompanied by Eugene Cernan and Harrison Schmitt. While Cernan and Schmitt landed and worked on the Moon in the Taurus–Littrow valley, Evans remained in lunar orbit on board the Command Module America, completing assigned work tasks which required visual geological observations, hand-held photography of specific targets, and the control of cameras and other highly sophisticated scientific equipment carried in the service module's SIM bay.

On the way back to Earth, Evans completed a one-hour, six-minute extravehicular activity, successfully retrieving three camera cassettes and completing a personal inspection of the equipment bay area. He logged 301 hours and 51 minutes in space, 1 hour and 6 minutes of which were spent in extravehicular activity. He holds the record of most time spent in lunar orbit: six days and four hours (148 hours).

Evans retired from the U.S. Navy as Captain on April 30, 1976, with 21 years of service, and remained active as a NASA astronaut involved in the development of NASA's Space Shuttle program. He served as a member of the operations and training group within the Astronaut Office, responsible for launch and ascent phases of the Space Shuttle flight program.

Evans retired from NASA in March 1977 to pursue a career in the coal industry. Later he worked with Western American Energy Corporation in Scottsdale, Arizona and was Director of Space Systems Marketing for Sperry Flight Systems.