Ronald Arbuthnott Knox (17 February 1888 – 24 August 1957) was an English Catholic priest, theologian, author, and radio broadcaster. Educated at Eton and Balliol College, Oxford, where he earned a high reputation as a classicist, Knox was a ordained as a priest of the Church of England (in which his father served as Bishop of Manchester) in 1912. He was a fellow and chaplain of Trinity College, Oxford until he resigned following his conversion to Roman Catholicism in 1917. Knox became a Catholic priest in 1918, continuing in that capacity his scholarly and literary career.

Knox served as Catholic chaplain at the University of Oxford from 1926 to 1939. He completed the "Knox Bible", a new English translation of the Latin Vulgate Bible that was one of the approved vernacular versions of the Bible for use in Catholic services in the 1960s and 70s. He published many other books, including essays on religious, philosophical, and literary subjects, as well as several popular works of detective fiction. He is remembered for his "Ten Commandments" for detective stories, which describe a form of crime fiction in which the reader may participate by attempting to find a solution to the mystery before the fictional detective reveals it.

Ronald Knox was born into an Anglican family in Kibworth, Leicestershire, England. His strongly evangelical father was Edmund Arbuthnott Knox, who later became the Bishop of Manchester, and was a descendant of John Arbuthnott, 8th Viscount of Arbuthnott.[1][2][3][4]

The young Knox was educated at Eaton House[5] and Summer Fields.[6] From there he went on to Eton College, where he took the first scholarship in 1900. Aged 17, he privately vowed to remain celibate.[7]

Interested in Anglo-Catholicism, Knox became a key member of Maurice Child's fashionable "set". He would not begin tutorials until 1911 and so accepted the job of classics tutor to the brother of an Eton friend, Harold Macmillan (who would be called "C" both in Knox's Spiritual Aeneid and in Evelyn Waugh's biography of Knox)[8] in the sabbatical, although he was later dismissed by Nellie Macmillan for being a high-church Anglican.

Knox was ordained an Anglican priest in 1912 and was appointed chaplain of Trinity College. During World War I, he served in military intelligence.[9] In 1915, Cyril Alington, who had been master in college at Eton during Knox's time there, and was now the headmaster of Shrewsbury School, invited Knox to join the teaching staff at Shrewsbury to fill in for a former colleger at Eton, his friend Evelyn Southwell, who had joined the British Army. Knox was long remembered at Shrewsbury as the highly dedicated and entertaining form master of Vb.[10]

Ministry in the Catholic Church

Knox resigned as Anglican chaplain in 1917 when he became a Roman Catholic. In response to Knox's conversion to Roman Catholicism, his father cut him out of his will.[11] In 1918 Knox was ordained a Roman Catholic priest and in 1919 joined the staff of St Edmund's College, Ware, Hertfordshire, remaining there until 1926. He explained his spiritual journey in two privately printed books, Apologia (1917) and A Spiritual Aeneid (1918). Knox's conversion to the Catholic faith was influenced in part by the English writer G. K. Chesterton,[12] before Chesterton himself became Catholic. When Chesterton was received into the Roman Catholic Church in 1922, he in turn was influenced by Knox.[13]

Knox wrote and broadcast on Christianity and other subjects. While Roman Catholic chaplain at the University of Oxford (1926–1939) and after his elevation to a monsignor in 1936, he wrote classic detective stories. In 1929 he codified the rules for detective stories into a "decalogue" of ten commandments. He was one of the founding members of the Detection Club and wrote several works of detective fiction, including five novels and a short story featuring Miles Bredon,[14] who is employed as a private investigator by the Indescribable Insurance Company.

Directed by his religious superiors, he retranslated the Latin Vulgate Bible into English, using Hebrew and Greek sources, beginning in 1936. His works on religious themes include: Some Loose Stones (1913), Reunion All Round (1914), A Spiritual Aeneid (1918), The Belief of Catholics (1927), Caliban in Grub Street (1930), Heaven and Charing Cross (1935), Let Dons Delight (1939) and Captive Flames (1940). When G. K. Chesterton died in 1936, Knox delivered a panegyric for his Requiem Mass in Westminster Cathedral.[15]

An essay in Knox's Essays in Satire (1928), "Studies in the Literature of Sherlock Holmes", was the first of the genre of mock-serious critical writings on Sherlock Holmes and mock-historical studies in which the existence of Holmes, Watson, et al. is assumed.[16] Another of these essays, "The Authorship of In Memoriam", purports to prove that Tennyson's poem was actually written by Queen Victoria. Another satirical essay, "Reunion All Round", mocked Anglican tolerance by appealing to the Anglican Church in Swiftean literary style to absorb Muslims, atheists, and even Catholics who had murdered Irish children.[17] 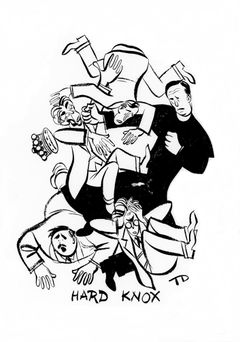 In 1953 Knox visited the Oxfords in Zanzibar and the Actons in Rhodesia.[18] It was on this trip that he began his translation of The Imitation of Christ and, upon his return to Mells, his translation of Thérèse of Lisieux's Autobiography of a Saint. He also began a work of apologetics intended to reach a wider audience than the student one of his The Belief of Catholics (1927). But all his activities were curtailed by his sudden and serious illness early in 1957. At the invitation of his old friend, Harold Macmillan, he stayed at 10 Downing Street while in London to consult a specialist. The doctor confirmed the diagnosis of incurable cancer.

He died on 24 August 1957, and his body was brought to Westminster Cathedral. Bishop Craven celebrated the Requiem Mass, at which Father Martin D'Arcy, a Jesuit, preached the panegyric. Knox was buried in the churchyard of St Andrew's Church, Mells.

The first biography of Knox, entitled The Life of Ronald Knox, was the work of his friend and literary executor, Evelyn Waugh, and appeared two years after his death. Waugh, a devout Catholic and fervent admirer of Knox's works, had obtained his friend's permission for the task. In 1977 Knox's niece, Penelope Fitzgerald, published a composite biography, The Knox Brothers, which devoted equal weight to him and his three brothers (her father E. V. Knox, the editor of the humorous magazine Punch, Dillwyn Knox, classical scholar and cryptanalyst, and Wilfred Knox, an Anglican monk and New Testament scholar). The Wine of Certitude: A Literary Biography of Ronald Knox by David Rooney was published in 2009. This followed two recent studies, Ronald Knox as Apologist: Wit, Laughter and the Popish Creed (2007) and Second Friends: C. S. Lewis and Ronald Knox in Conversation (2008), both by Milton Walsh. A more recent biography setting Knox in the cultural context of his times is Terry Tastard, Ronald Knox and English Catholicism (2009).

In January 1926, for one of his regular BBC Radio programmes, Knox broadcast a simulated live report of revolution sweeping across London, entitled Broadcasting the Barricades.[19] In addition to live reports of several people, including a government minister, being lynched, his broadcast mixed supposed band music from the Savoy Hotel with the hotel's purported destruction by trench mortars. The Houses of Parliament and the Clock Tower were also said to have been flattened.

Because the broadcast occurred on a snowy weekend, much of the United Kingdom was unable to get the newspapers until days later. The lack of newspapers caused a minor panic, as it was believed that the events in London caused this. Four months later there was considerable public disorder during the General Strike, so the possibility of a revolution had been realistic at the time.[20]

The script of the broadcast is reprinted in Essays in Satire (1928) as "A Forgotten Interlude".

The majority of novels of Knox's era, coined The Golden Age of Detective Fiction, were "whodunits" with codified rules to allow the reader to attempt to solve the mystery before the detective. According to Knox, a detective story

must have as its main interest the unravelling of a mystery; a mystery whose elements are clearly presented to the reader at an early stage in the proceedings, and whose nature is such as to arouse curiosity, a curiosity which is gratified at the end.[23]

He expanded upon this definition by giving ten rules of writing detective fiction.

Knox's "Ten Commandments" (or "Decalogue") are as follows:

Collaborative works by the Detection Club