From Infogalactic: the planetary knowledge core
Jump to: navigation, search
For other uses, see Ronda (disambiguation).

Ronda (Spanish pronunciation: [ˈronda]) is a city in the Spanish province of Málaga. It is located about 100 kilometres (62 mi) west of the city of Málaga, within the autonomous community of Andalusia. Its population is approximately 35,000 inhabitants.

Around the city are remains of prehistoric settlements dating to the Neolithic Age, including the rock paintings of Cueva de la Pileta. Ronda was however first settled by the early Celts, who, in the 6th century BC called it Arunda. Later Phoenician settlers established themselves nearby to found Acinipo, known locally as Ronda la Vieja, Arunda or Old Ronda. The current Ronda is however of Roman origins,[1] having been founded as a fortified post in the Second Punic War, by Scipio Africanus. Ronda received the title of city at the time of Julius Caesar.

In the 5th century AD Ronda was conquered by the Suebi, led by Rechila, being reconquered in the following century by the Eastern Roman Empire, under whose rule Acinipo was abandoned. Later the Visigoth king Leovigild captured the city. Ronda was part of the Visigoth realm until 713, when it fell to the Arabs, who named it Hisn Ar-Rundah ("Castle of Rundah") and made it the capital of the Takurunna province.

It was the hometown of the polymath Abbas Ibn Firnas (810–887), an inventor, engineer, alleged aviator, physician, Muslim poet, and Andalusian musician.

After the disintegration of the caliphate of Córdoba, Ronda became the capital of a small kingdom ruled by the Berber Banu Ifran, the taifa of Ronda. During this period Ronda received most of its Islamic architectural heritage. In 1065 Ronda was conquered by the taifa of Seville led by Abbad II al-Mu'tadid. Both the poet Salih ben Sharif al-Rundi (1204–1285) and the Sufi scholar Ibn Abbad al-Rundi (1333–1390) were born in Ronda.

The Islamic domination of Ronda ended in 1485, when it was conquered by the Marquis of Cádiz after a brief siege. Subsequently, most of the city's old edifices were renewed or adapted to Christian roles, while numerous others were built in newly created quarters such as Mercadillo and San Francisco. The Real Maestranza de Caballería de Ronda was founded in the town in 1572, with military finalities.

The Spanish Inquisitions affected the Muslims living in Spain greatly. Shortly after 1492, when the last outpost of Muslim presence in the Iberian Peninsula, Granada, was conquered, the Spanish decreed that all Muslims must either vacate the peninsula without their belongings or convert. Many people overtly converted to keep their possessions, while secretly practising their religion. Muslims who converted only overtly were called Moriscos. Moriscos were required to wear upon their caps and turbans a blue crescent. Traveling without a permit meant a death sentence. This systematic suppression forced the Muslims to seek refuge in mountainous regions of southern Andalusia; Ronda was one such refuge.

On May 25, 1566 Philip II decreed the use of the Arabic language (written or spoken) illegal, doors to homes to remain open on Fridays to verify that no Muslim Friday prayers were conducted, and heavy taxation on Moriscos trades. This led to several rebellions, one of them in Ronda under the leadership of Al-Fihrey. Al-Fihrey's defeated the Spanish army sent to suppress them under the leadership of Alfonso de Aguilar. The massacre of the Spaniards prompted Phillip II to order the expulsion of all Moriscos in Ronda.

In the early 19th century, the Napoleonic invasion and the subsequent Peninsular War caused much suffering in Ronda, whose inhabitants were reduced from 15,600 to 5,000 in three years. Ronda's area became the base first of guerrilla warriors, then of numerous bandits, whose deeds inspired artists such as Washington Irving, Prosper Mérimée and Gustave Doré. In the 19th century the economy of Ronda was mainly based on agricultural activities. In 1918 the city was the seat of the Assembly of Ronda, in which the Andalusian flag, coat of arms and anthem were designed.

Ronda's Romero family—from Francisco, born in 1698, to his son Juan, to his famous grandson Pedro, who died in 1839—played a principal role in the development of modern Spanish bullfighting. In a family responsible for such innovations as the use of the cape, or muleta, and a sword especially designed for the kill, Pedro in particular transformed bullfighting into "an art and a skill in its own right, and not simply ... a clownishly macho preamble to the bull's slaughter."[2]

Ronda was heavily affected by the Spanish Civil War, after which much of the population emigrated elsewhere. The famous scene in Chapter 10 of Hemingway's "For Whom the Bell Tolls", describing the 1936 execution of Fascist sympathisers in a (fictional) village who are thrown off a cliff, is considered to be modeled on actual events at the time in Ronda.[3] 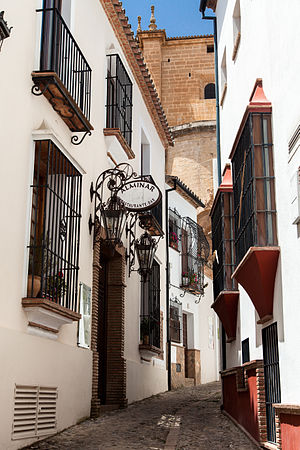 Ronda is situated in a very mountainous area about 750 m above mean sea level. The Guadalevín River runs through the city, dividing it in two and carving out the steep, 100 plus meters deep El Tajo canyon upon which the city perches. The Spanish Fir (Abies pinsapo) is endemic to the mountains surrounding Ronda. 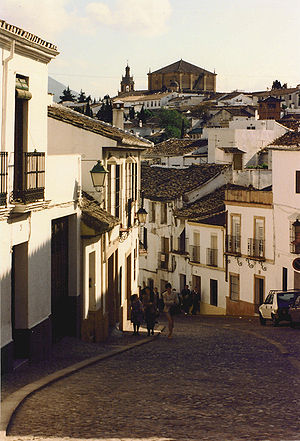 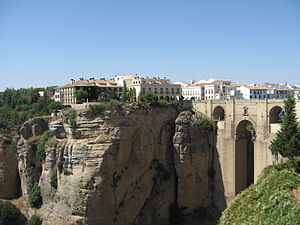 The Puente Nuevo bridge in Ronda 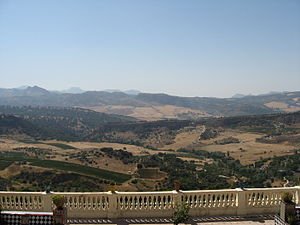 The view from Ronda 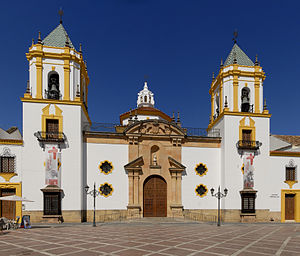 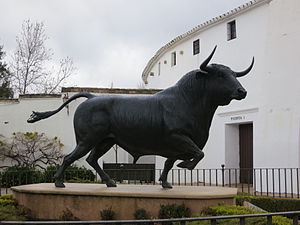 Three bridges, Puente Romano ("Roman Bridge", also known as the Puente San Miguel), Puente Viejo ("Old Bridge", also known as the Puente Árabe or "Arab Bridge") and Puente Nuevo ("New Bridge"), span the canyon. The term "nuevo" is a bit of a misnomer, as the building of this bridge commenced in 1751 and took until 1793 to complete. The Puente Nuevo is the tallest of the bridges, towering 120 metres (390 ft) above the canyon floor, and all three serve as some of the city's most impressive features. The former town hall, which sits next to the Puente Nuevo, is the site of a parador, and has a view of the Tajo canyon.

The ‘Corrida Goyesca’ is a unique and historical bullfight that takes place once a year in Ronda in the Plaza de toros de Ronda, the oldest bullfighting ring in Spain.[4] It was built in 1784 in the Neoclassical style by the architect José Martin de Aldehuela, who also designed the Puente Nuevo.

The partially intact Baños árabes ("Arab baths") are found below the city and date back to the 13th and 14th centuries.

In the first decades of the 20th century the famous German poet Rainer Maria Rilke spent extended periods in Ronda. There he kept a permanent room at the Hotel Reina Victoria (built in 1906) where his room remains to this day as he left it, a mini-museum of Rilkeana. According to the hotel's publicity, Rilke wrote (though probably not in Spanish) "He buscado por todas partes la ciudad soñada, y al fin la he encontrado en Ronda" and "No hay nada más inesperado en España que esta ciudad salvaje y montañera" ("I have sought everywhere the city of my dreams, and I have finally found it in Ronda" and "There is nothing that is more startling in Spain than this wild and mountainous city.")

Hemingway's novel For Whom the Bell Tolls describes the execution of Nationalist sympathizers early in the Spanish Civil War. The Republicans murder the Nationalists by throwing them from cliffs in an Andalusian village, and Hemingway allegedly based the account on killings that took place in Ronda at the cliffs of El Tajo.

Orson Welles said he was inspired by his frequent trips to Spain and Ronda (e.g. his unfinished film about Don Quixote). After he died in 1985, his ashes were buried in a well located on the rural property of his friend, the retired bullfighter Antonio Ordoñez.

English writer George Eliot's book Daniel Deronda ("Daniel of Ronda") tells the story of a Spanish Jew brought up as an Englishman. There has been some speculation that Eliot's ancestors had lived in Ronda prior to the expulsion of the Jews from Spain in 1492.

In the fashion world, Italian designer Giorgio Armani specially designed the bullfighting costume called ‘Goyesco’ for famed bullfighter Cayetano Rivera Ordóñez on the occasion of the ‘Corrida Goyesca’ that took place on September 6, 2009, in Ronda. Cayetano's suit of lights was in the Goyaesque style, comprising a jacket, trousers and cloak in techno-satin. The three pieces are embroidered with sequins, small glitter stones and thread, all matching the colour of the background fabric.[4][5]

Ronda is accessible via highways and by rail from Algeciras and from Córdoba. There is a direct train from Madrid to Ronda that operates twice daily.

The single track railway between Ronda and Algeciras was built between 1890 and 1892 by the Gibraltar Railway Company. It enabled the British military officers to escape the summer heat of Gibraltar. The railway was built by James Morrison, an engineer, in partnership with Sir Alexander Henderson, a financier. The station at Ronda was opened in 1892.

Ronda is twinned with: