Play (help·info)). Note that the root is doubled at the octave.

In music theory, the concept of root denotes the idea that a chord could be represented and named by one of its notes. It is linked to harmonic thinking, that is, to the idea that vertical aggregates of notes form a single unit, a chord. It is in this sense that one can speak of a "C chord", or a "chord on C", a chord built from C and of which C is the root. The root needs not be the bass note of the chord: the concept of root is linked to that of the inversion of chords, itself deriving from the notion of invertible counterpoint.

In tertian harmonic theory, that is in a theory where chords can be considered stacks of thirds (e.g. in common practice tonality), the root of a chord is the note on which the thirds are stacked. For instance, the root of a triad such as C-E-G is C, independently of the order in which the three notes are presented. A triad knows three possible positions, a "root position" with the root in the bass, a first inversion, e.g. E-G-C, and a second inversion, e.g. G-C-E, but the root remains the same in all three cases. Four-note seventh chords know four positions, five-note ninth chords know five positions, etc., but the root position always is that of the stack of thirds, and the root is the lowest note of this stack (see also Factor (chord)).

Some theories of common-practice tonal music admit the sixth as a possible interval above the root and consider in some cases that 6
5 chords nevertheless are in root position – this is the case particularly in Riemannian theory.

Chords that cannot be reduced to stacked thirds (e.g. chords of stacked fourths) are not amenable to the concept of root.

A major scale contains seven unique pitch classes, each of which might serve as the root of a chord: 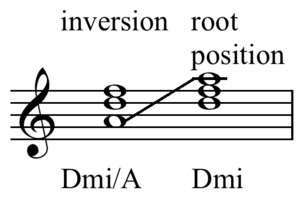 Various devices have been imagined to notate inverted chords and their roots:

The first mentions of the relation of inversion between triads appears in Otto Sigfried Harnish’s Artis musicae (1608), which describes "perfect" triads in which "the lower note of the fifth is expressed in its own position", and "imperfect ones", in which the "base" (i.e. root) of the chord appears only higher. Johannes Lippius, in his Disputatio musica tertia (1610) and Synopsis musicae novae (1612), is the first to use the term "triad" (trias harmonica); he also uses the term "root" (radix), but in a slightly different meaning.[4] Thomas Campion, A New Way of Making Fowre Parts in Conterpoint, London, c1618, notes that when chords are in first inversions (sixths), the bass is not "a true Base", which is implicit a third lower. Campion’s "true Base" is the root of the chord.[5] Full recognition of the relationship between the triad and its inversions is generally credited to Jean-Philippe Rameau’s Traité d’harmonie (1722). Rameau himself indeed was convinced having been the first to discover triadic inversion,[6] but his main achievement is to have recognized the importance of the succession of roots (or of chords identified by their roots) for the construction of tonality (see below, Root progressions).

The concept of root has some basis in the physical properties of harmonic sounds. When two notes or more notes from the harmonic series are played at the same time, people sometimes perceive the fundamental note of the series, even if that note is not present (see Missing fundamental). This property has been used in organ building for the production of low notes by resultant tones. Andreas Werckmeister’s Harmonologia (1702) describes the major triad in root position and in first inversion in terms of the harmonic series, but this description cannot be extended to the minor triad.[7]

Hindemith, who described the chromatic scale as resulting from "the juxtaposition of vibrating units in the proportions of the simple numbers from 1 to 6", i.e. from the intervals corresponding to harmonic partials 1 to 6, called the fundamental of this harmonic series the "root" of the scale.[8] From this root, he then derived a series of notes in diminishing degree of relationship, which he called Series 1 and on which he built a system of composition. This system however has been criticized for being based generically in theory derived rules and not on perception of specific instances.[3] 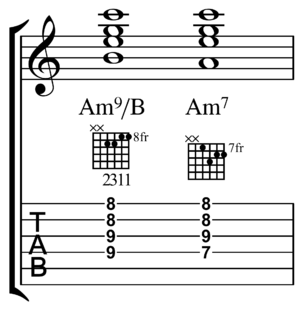 Assumed root, Am7/B: A minor ninth chord without root and with B in the bass.[9]

An assumed root (also absent, or omitted root) is, "when a chord does not contain a root ([which is] not unusual),".[10] In any context, it is the unperformed root of a performed chord. This 'assumption' may be established by the interaction of physics and perception, or by pure convention. "We only interpret a chord as having its root omitted when the habits of the ear make it absolutely necessary for us to think of the absent root in such a place."[emphasis original].[11] "We do not acknowledge omitted Roots except in cases where the mind is necessarily conscious of them...There are also cases in instrumental accompaniment in which the root having been struck at the commencement of a measure, the ear feels it through the rest of the measure."[emphasis original][12]

In guitar tablature, this may be indicated, "to show you where the root would be," and to assist one with, "align[ing] the chord shape at the appropriate fret," with an assumed root in grey, other notes in white, and a sounded root in black.[9] 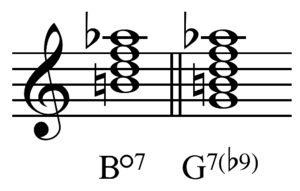 A comparison of the diminished 7th 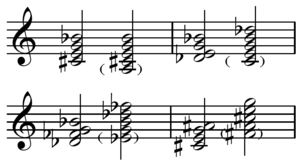 Diminished seventh chord's use in modulation: each assumed root, in parenthesis, may be used as a dominant, tonic, or supertonic.[14]

The fundamental bass (basse fondamentale) is a concept proposed by Jean-Philippe Rameau, derived from the thoroughbass, to notate what would today be called the progression of chord roots rather than the actual lowest note found in the music, the bassline. From this Rameau formed rules for the progression of chords based on the intervals between their roots. Subsequently, the Viennese theory of tonal music has typically treated chordal roots as the defining feature of harmony.[16]

It may be noted in passing that the expression "Fundamental bass" is somewhat improper in English, and is used here as a literal translation of the French basse fondamentale. Indeed, English makes a relative distinction between the music-theoretic concept of "Root" and the acoustic concept of "Fundamental", a distinction that does not exist in other languages: the links to Wikipedia articles corresponding to this one in other languages link to articles titled Grundton in German or the equivalent in other Germanic languages, or (Basse) Fondamentale in French or the equivalent in other Roman languages. The literal translations of "root" as Wurzel (German) or racine (French), etc., are not common in music theory, unless in texts translated from English.

Why is it so important to know the root of the chord? Because the roots of the chords will sound whether we want them to or not, whether or not the alphabetical symbol is correct. The root progression which emerges may not coincide with what we think we have written; it may be better or it may be worse; but art does not permit chance. The root progression supports the work. The total root progression is heard as a substantive element, almost like another melody, and it determines the tonal basis of the music. And the tonal basis of a piece is very important to the construction of themes and to the orchestration.[20]