A root-analog dental implant (RAI) – also known as a truly anatomic dental implant, or an anatomical/custom implant – is a medical device to replace one or more roots of a single tooth immediately after extraction. In contrast to common 'off the shelf' titanium screw type implants, these implants are custom-made to exactly match the extraction socket of the specific patient.

As the root analog dental implant matches the tooth socket (dental alveolus) it can only be placed in conjunction with the tooth extraction. Thus, if the tooth has been already lost and the soft and hard tissue is already healed a RAI can no longer be placed.

The basic principle of endosseous implants is a biological process described as osseointegration, in which materials such as titanium or ceramic form an intimate bond to bone. There are no particular differences between the osseointegration of a root analog implant and a conventional screw type implant.

The scope of anatomic dental implants is to fit as perfectly as possible into the bony walls of a tooth socket. By adapting the implant to the patient instead of adapting the patient to a rotationally symmetric screw type implant, any surgery on hard or soft tissue, by drilling healthy bone and filling gaps with cadaver/artificial bone, is absolutely unnecessary.

So far, only a few study groups are working in this area, and this implant solution is not yet commercially available.

The Problem with conventional implants 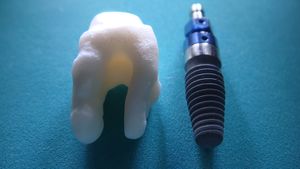 As technology has improved, so has implant success rate. However, this does not address fundamental problem with conventional implant technology: the patient must be altered to fit the screw or cylinder implant, rather than the other way around.

Screw-type implants are highly unnatural in form and color, and – most importantly – they don’t fit the tooth socket. Even a single-rooted tooth is nearly twice as wide in one direction as in the other. A cylindrical screw implant must be placed into bone, and cannot fit into an existing tooth socket without invasive surgery. Such surgery involves drilling into healthy bone, filling gaps between implant and bone either with bone or bone substitutes, and frequently sinus lift procedures.[1]

Titanium implants are prone to corrosion in an acidic environment. This has been associated with implant failure and is considered to be a trigger for peri-implantitis. Corrosion generates a large amount of metal ions and other debris, and its accumulation leads to severe implant discoloration, pitting, cracking, and creation of crevices. It may also prevent the implant surface from re-integrating with the surrounding bone.[2][3]

Since the grey color of titanium tends to show through gums, especially in case of gum and bone recession, esthetic outcome is often highly unpredictable.[3][4][5] 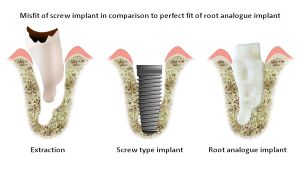 In contrast to conventional screw, plate, or cylinder implants, RAIs are custom made to perfectly fit the tooth socket of a specific patient immediately after tooth extraction. Therefore every implant is as unique as a patient's fingerprint. As an optimized root-form it is much more than a simple 1:1 replica of a tooth. Since it exactly fills the gap left after the tooth is extracted, surgery is rarely needed.[1] The implant can be produced from a copy of the extracted tooth, an impression of the tooth socket, or from a CT scan or CBCT scan [6]. The advantage of a CBCT scan is that the implant can be produced before extraction. With the former methods, it takes one or two days to fabricate an implant.

A root analogue implant is usually fabricated from zirconium dioxide (zirconia), although titanium can be used. Zirconium dioxide is doped with small amounts of yttria, which results in a material with superior thermal, mechanical, and electrical properties, and enhanced fracture toughness - ideal for surgical implants. Studies have shown that osseointegration of zirconia is similar to, or even better, than titanium.[1][4][5] In addition, zirconia is more esthetic in form and color, with no discoloration visible through gums.[3][4][5][7]

True ‘root-form analogue’ or ‘anatomic’ dental implants have been attempted in the past. Those early attempts failed because of insufficient knowledge of healing of cortical and spongy bone, method, material, tooling, and technology. The principle of Differentiated Osseointegration, in conjunction with suitable material and technology, has enabled the first success in this field[8][9][10].

The Principle of “Differentiated Osseointegration”

The design of the implant surface is crucial in integrating all three possible primary bone-to-implant contact scenarios:

The combination of all these factors is the most important condition for osseointegration of anatomically shaped dental implants. 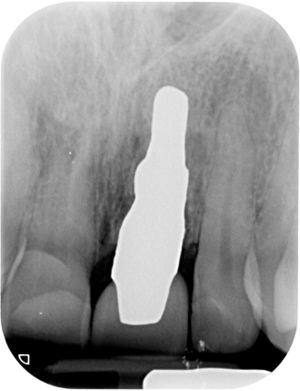 Recovery time is very fast as neither soft nor hard tissue is traumatized. Typically, even the day after implant placement there is no swelling, bruising or pain. After 8–12 weeks' healing period, the final crown may be fitted by a family dentist.[8][9][10]

Form alterations to the RAI, in conjunction with the pathology of patient, can only be carried out by a practitioner with the requisite knowledge, experience and skills. A failure rate of 10% appears high because of the wider indications for this implant solution; almost all failures occur within the first 4 weeks. After this period, it is rare to have an implant fail.

Tooth loss is as old as humanity. Examples from history show that it has always made sense to replace a tooth with an implant that is shaped like a tooth.[18] The earliest known dental implant, discovered in Honduras and dating from 600 AD, is that of a Mayan woman who had several implanted incisors carved from sea shells. At least one of these implants had osseointegrated.[18]

In modern times, a tooth replica implant in baboons was reported as early as 1969 by Hodosh and colleagues, but the polymethacrylate tooth analogue was encapsulated by soft tissue rather than osseointegrated.[19][20]

In 1992 Lundgren and colleagues used root analogue titanium implants in an experimental model of immediate implant placement in beagle dogs, with bony integration in 88% of cases[21]. A good fit between implant and bone was considered an important factor for implant success.

For this reason, Kohal et al. in 1997 further refined the approach of root-analogue titanium implants in monkeys by using slightly larger implants to compensate for the lost periodontal ligament. This provided a better fit between implant and extraction socket. In several instances implant insertion led to fractures of the thin buccal wall of the alveolar bone.[22]

An ensuing clinical study in humans in 2002 with root-identical titanium implants showed excellent primary stability, but, disappointingly, nearly half the implants failed after 9 months. This particular implant system was not recommended for clinical use, and clinical trials were stopped.[23][24]

A new attempt was made by Pirker et al 2004 in a human trial with root analogue zirconia implants, but this time by applying differentiated osseoingration on the surface. In 2011 he reported 90% success rate with this method in a 2.5 year human trial.[10]

Mangano et al in Italy in 2012 reported the successful clinical use of a custom-made root analogue implant made by direct laser metal forming (DLMF) from a CBCT scan. This demonstrated that it is possible to combine CBCT 3D data and CAD/CAM technology to manufacture root-analogue implants with sufficient precision.[25]

In 2012 Moin et al in The Netherlands investigated the accuracy of CBCT and CAD/CAM technology on individual root analogue implants, and concluded that this technique could potentially provide accurate dental implants for immediate placement.[26]

Pour et al in Germany reported a single tooth replacement with a root-analog hybrid implant in 2017, using a titanium implant fused with a ceramic cover in the esthetic zone.[17]

Successful RAIs are a relatively young technology. In contrast to conventional geometric implants, only a handful of scientific groups have carried out any work in this area since 1964.

Industry 4.0 is a reference to the ‘fourth industrial revolution’, which is characterized by connected computers exchanging data in an automated production process. This is ideal for the manufacture of custom medical devices.[27]

Ultimately, this is a technical solution that replaces complex and risky surgery.