As of August 2013[update], Root Sports Pittsburgh is available on cable providers throughout nearly all of Pennsylvania (outside of the Philadelphia market), West Virginia, western Maryland, eastern Ohio, southwestern border areas of New York and Ashland, Kentucky, reaching more than 2.4 million homes; it is also available nationwide on satellite via DirecTV and Dish Network.

The channel launched on April 13, 1986 as Pirates Cable Network, exclusively serving the Pittsburgh metropolitan area; its first sports event telecast on that date was a Major League Baseball game between the Pittsburgh Pirates and Chicago Cubs from Three Rivers Stadium, announced by Mike Lange, in which the Pirates shut out the Cubs, 8-0.

The network commenced full-time broadcasts on April 24, 1986, under the new name KBL Entertainment Network, in order to allow other sports besides the Pirates to be included on the network. Its first regular broadcast was a Pirates home game against the New York Mets.[1] The network was initially owned by Tele-Communications Inc. (now part of Comcast), then the largest cable television provider in the Pittsburgh market. KBL quickly expanded its cable coverage, expanding to what is approximately its present day six-state broadcast area on May 9, 1986.

While it primarily carried sports-related programming, KBL also served as a general entertainment cable channel while under TCI ownership, essentially filling the void left after independent station WPGH-TV (channel 53) became a charter affiliate of the Fox Broadcasting Company seven months after KBL's debut. It aired children's programming for part of the day, including reruns of the John Candy animated series Camp Candy.[1]

In 1994, TCI transferred the channel to its corporate parent Liberty Media; KBL then immediately dropped all entertainment programming and converted the renamed Prime Sports KBL into an affiliate of Prime SportsChannel America, a partnership between Liberty's Prime Network and the Cablevision/NBC-owned SportsChannel America regional sports network groups. In 1995, Prime Network's retail subsidiary, Prime Sports Merchandising, purchased some sports apparel stores located inside shopping malls and rebranded them as Prime Sports Shops, promoting them on its networks including KBL.[2] 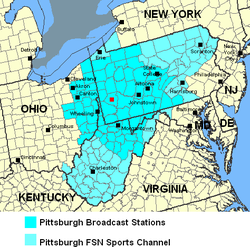 In 1996, News Corporation, which formed a sports division for the Fox network two years earlier after it obtained the broadcast rights to the National Football Conference and sought to create a group of regional sports networks, acquired a 50% interest in the Prime Network from TCI parent Liberty Media.[3] Later that year on November 1, News Corporation and Liberty Media relaunched the Prime Network affiliates as part of the new Fox Sports Net group, with Prime Sports KBL officially rebranding as Fox Sports Pittsburgh.[4] The deal temporarily ended the Prime SportsChannel partnership, although News Corporation subsequently acquired most of the SportsChannel networks the following year;[5] the retail stores, meanwhile, retained the "Prime Sports" name for many years after the rebranding of the regional networks as part of Fox Sports Net. The channel was rebranded as Fox Sports Net Pittsburgh in 2000, as part of a collective brand modification of the FSN networks under the "Fox Sports Net" banner; subsequently in 2004, the channel shortened its name to FSN Pittsburgh, through the networks' de-emphasis of the "Fox Sports Net" brand.

On December 22, 2006, News Corporation sold its interest in FSN Pittsburgh and sister networks FSN Utah, FSN Northwest and FSN Rocky Mountain to Liberty Media, in an asset trade in which News Corporation also traded its 38.5% ownership stake in satellite provider DirecTV for $550 million in cash and stock, in exchange for Liberty Media's 16.3% stake in the company.[6] On May 4, 2009, DirecTV Group Inc. announced it would become a part of Liberty's entertainment unit, part of which would then be spun off into the separate company under the DirecTV name, in a deal in which Liberty would increase its share in DirecTV from 48% to 54%, with Liberty owner John Malone and his family owning a 24% interest. DirecTV would operate its newly acquired FSN-affiliated networks through DirecTV Sports Networks,[7] a new division formed when the split off from Liberty Media was completed on November 19, 2009.[8]

On December 17, 2010, DirecTV Sports Networks announced that its four Fox Sports Networks-affiliated regional outlets would be relaunched under the "Root Sports" brand.[9] The network officially rebranded as Root Sports Pittsburgh on April 1, 2011, coinciding with the start of the 2011 Major League Baseball season. For nominal purposes, the Root Sports networks continued to carry programming distributed mainly to the Fox Sports regional networks to provide supplementary sports and entertainment programming.

Root Sports Pittsburgh carries more than 350 live sports events annually (all of which are also available in high definition), featuring a mix of professional, collegiate and high school sports. To fill out its schedule outside various local sports, the network also carries sports events, documentary and magazine programs distributed nationally by Fox Sports Networks through its programming affiliation with its former regional sports network group parent.

The network holds the regional cable television rights to the Pittsburgh Pirates of Major League Baseball, carrying over 150 regular season and Spring training games annually, as well as rebroadcasts of recent games (as part of Pirates Instant Replay) and the team analysis program Inside Pirates Baseball. 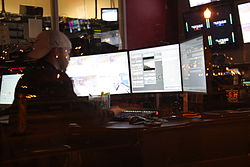 Root Sports technicians during a November 19, 2011 game between the Pittsburgh Penguins and Florida Panthers.

On April 27, 2011, Root Sports Pittsburgh reached a 20-year contract extension with the Penguins, allowing the network to continue carrying most of the team's NHL game telecasts through the end of the 2028–29 NHL season.[10]

The network also serves as the cable home of the NFL's Pittsburgh Steelers, broadcasting team-related magazine and analysis programs such as weekly press conferences held by coach Mike Tomlin during the regular season and the team's coaches show The Mike Tomlin Show (both hosted by Stan Savran). As well, all Steelers preseason football games not picked up by CBS, Fox, NBC or ESPN are telecast on Root Sports Pittsburgh. Pittsburgh is one of several NFL markets where preseason football games are cable-exclusive.