Roots: The Saga of an American Family

Roots: The Saga of an American Family is a novel written by Alex Haley and first published in 1976. It tells the story of Kunta Kinte, an 18th-century African, captured as an adolescent and sold into slavery in the United States, and follows his life and the lives of his descendants in the U.S. down to Haley. The release of the novel, combined with its hugely popular television adaptation, Roots (1977), led to a cultural sensation in the United States, and considered one of the most important U.S. works of the twentieth century. The novel spent months on The New York Times Best Seller List, including 22 weeks in that list's top spot. The last seven chapters of the novel were later adapted in the form of a second miniseries, Roots: The Next Generations (1979). It stimulated interest in genealogy and appreciation for African-American history.

Following the success of the novel and the miniseries, Haley was accused by two authors of plagiarism of their novels. Harold Courlander successfully asserted that Roots was plagiarized from his novel The African, published in 1967. The resulting trial ended with an out-of-court settlement and Haley's admission that some passages within Roots had been copied from Courlander's work; he said it was unintentional.

Edward Kosner, reviewing the volume Alex Haley by Robert J. Norrell, said that Haley "could have avoided all the grief if he and his publishers had simply labeled the book [Roots] what it was—a historical novel valid in its essential narrative but informed by the imagination".[1]

Brought up on the stories of his elderly female relatives—including his Grandmother Cynthia, whose father was emancipated from slavery in 1865—Alex Haley claimed to have traced his family history back to "the African," Kunta Kinte, captured by members of a contentious tribe and sold to slave traders in 1767. In the novel, each of Kunta's enslaved descendants passed down an oral history of Kunta's experiences as a free man in Gambia, along with the African words he taught them. Haley researched African village customs, slave-trading and the history of African Americans in America—including a visit to the griot (oral historian) of his ancestor's African village. He created a colorful history of his family from the mid-eighteenth century through the mid-twentieth century, which led him back to his heartland of Africa. 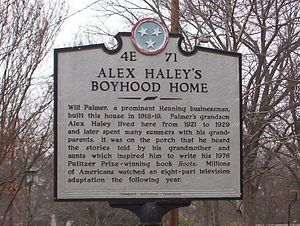 Published in October 1976 amid significant advance expectations,[2] Roots was immediately successful, garnering a slew of positive reviews[3][4] and debuting at #5 of The New York Times Best Seller list (with The Times choosing to classify it as non-fiction).[5] By mid-November, it had risen to the #1 spot on the list.[6] The television adaptation of the book aired in January 1977, further fueling book sales. Within seven months of its release, Roots had sold over 1.5 million copies.[7]

In total, Roots spent 22 weeks at the #1 spot on The Times' list, including each of the first 18 weeks of 1977, before falling to #3 on May 8.[8] It did not fall off of the list entirely until August 7.[9] Ultimately, it was on the list for a total 46 weeks.[10] Together, the success of the novel and its 1977 television adaptation, sparked an explosion of interest in the fields of genealogy and researching family histories.[11][12][13]

Haley earned a Pulitzer Prize special award in 1977 for Roots.[14] The television miniseries garnered many awards, including nine Emmys and a Peabody.

See also: Harold Courlander § Roots and the issue of plagiarism

In the spring of 1977, Haley was charged with plagiarism in separate lawsuits by Harold Courlander and Margaret Walker Alexander. Courlander, an anthropologist, charged that Roots was copied largely from his novel The African (1967). Walker claimed that Haley had plagiarized from her Civil War-era novel, Jubilee (1966). Legal proceedings in each case were concluded late in 1978. Courlander's suit was settled out of court for $650,000 and an acknowledgment from Haley that certain passages within Roots were copied from The African.[15] Haley claimed that the appropriation of Courlander's passages had been unintentional.[16] Walker's case was dismissed by the court, which, in comparing the content of Roots with that of Jubilee, found that "no actionable similarities exist between the works."[17][18]

Because Haley discussed his massive research and claimed that the family accounts in Virginia and North Carolina were based on verifiable documented facts, critics were disconcerted when checking revealed that not to be the case. They could have accepted a novel and judged it on its own terms, but Haley claimed it to be "true".[19] Although Haley acknowledged the novel was primarily a work of fiction (he described it as "faction"), he claimed that his ancestor was Kunta Kinte, an African taken from the village of Juffure in what is now The Gambia. He said that Kunta Kinte was sold into slavery where he was given the name Toby. While held by John Waller, Kinte had a daughter named Kizzy, who was Haley's great-great-great grandmother. Haley said that he had identified the slave ship that transported Kunta Kinte from Africa to North America in 1767.

Haley also suggested that his portrayal of life and figures among the slaves and masters in Virginia and North Carolina were based on facts which he had confirmed through historical documents. In the concluding chapter of Roots Alex Haley wrote:

Haley said that most of the dialogue and necessary incidents were fictional, based on what he knew took place and what the research led him to feel took place.[20]

Historians and genealogists have said that he did not rely on facts as closely as he represented. For example, researchers have cast doubts on whether Haley tracked his ancestry to a specific village and individual, or was being told what he wanted to hear by the people who lived there.[21][22][23][24] Donald R. Wright, an Africanist historian, and Gary B. and Elizabeth Shown Mills, a historian and a genealogist, respectively, who specialize in African-American and southern history, separately revisited parts of Haley's research. They concluded he was unlikely to have been able to make all the stated connections. The Millses found that historical documents strongly contradicted his accounts allegedly based on fact of family history in the colonies.

Professor Wright focused on Haley's identification and portrayal of alleged African ancestors. He noted the unreliability of twentieth-century griots and village elders for historical accounts of the 1700s, and significant inaccuracies in the portrayal of Juffure as a pastoral village.

Several years later, the Millses published an article that focused upon Haley's identification and portrayal of four generations of slave forebears and masters in Virginia and North Carolina. Their reporting concluded: "Those same plantation records, wills, and censuses cited by Mr. Haley not only fail to document his story, but they contradict each and every pre-Civil War statement of Afro-American lineage in 'Roots'." [25][26] They fault Haley for failing to reconcile his family stories by giving precedence to the facts found in documents and other evidence, rather than oral histories, but presenting his work as factually based. Among other differences, they found several records of a slave named Toby being held by the Waller family five years before his arrival by slave ship in Virginia, as told by Haley. They concluded the many contradictions weakened the author's assertion that "By 1967, I felt I had the seven generations of the U.S. side documented."[25]

The Millses also make "the obvious point" that "Chicken George's presence in England in the 1850s, where slavery was illegal, would have won him automatic freedom under both English and American law".[25] The English decision in Somerset's case of 1772 was widely discussed in America prior to the Civil War.

Haley criticized his detractors' reliance upon written records in their evaluation of his work, contending that such records were "sporadic" and frequently inaccurate with regard to such data as slave births and ownership transactions. Haley asserted that for African-American genealogy, "well-kept oral history is without question the best source."[27]

Concerns were raised about the trustworthiness of Kebba Fofana from the Gambia, whom Haley had cited as a significant source. He said Fofana was a griot in Juffure, who, during Haley's visit, confirmed the tale of the disappearance of Kunta Kinte. The separate investigations by Mark Ottaway of The Sunday Times and Professor Wright found that Fofana was not a genuine griot, and that he was aware of Haley's pending visit. He may have been coached to relate a story matching Haley's chronicle. In subsequent re-tellings, details of Fofana's story failed to match that first account.[21][22][23][24] Haley did not respond directly to the work of either Wright or Ottaway, but said that the latter's article was "unwarranted, unfair and unjust", and added that he had no reason to think Fofana unreliable.[28]

Harvard University professor Dr. Henry Louis Gates, Jr. was a friend of Haley, but years after his death Gates acknowledged doubts about the author's claims. He said,

"Most of us feel it's highly unlikely that Alex actually found the village whence his ancestors sprang. Roots is a work of the imagination rather than strict historical scholarship. It was an important event because it captured everyone's imagination."[29]

Gates later was the host of African American Lives, a TV series that relied on research by historians and genealogists, but also on DNA testing, to reveal to prominent American figures facts of their family histories.

Roots was made into a television miniseries that aired over eight consecutive nights in January 1977. ABC network television executives chose to "dump" the series into a string of airings rather than space out the broadcasts, because they were uncertain how the public would respond to the controversial, racially charged themes of the show. The series garnered enormous ratings and became an overnight sensation. Approximately 130 million Americans tuned in at some time during the eight broadcasts. The concluding episode on January 30, 1977 has been ranked as the third most watched telecast of all time by the Nielsen corporation.

The cast of the miniseries included LeVar Burton as Kunta Kinte, Leslie Uggams as Kizzy, and Ben Vereen as Chicken George. A 14-hour sequel, Roots: The Next Generations, aired in 1979, featuring the leading African-American actors of the day.

In December 1988, ABC aired a two-hour made-for-TV movie: Roots: The Gift. Based on characters from the book, it starred LeVar Burton as Kunta Kinte, Avery Brooks as Cletus Moyer, Kate Mulgrew as Hattie Carraway, and Tim Russ as house slave Marcellus (all four actors later became prominent as leading actors in the Star Trek franchise).

In May 2007, BBC America released Roots as an audiobook narrated by Avery Brooks. The release coincided with Vanguard Press's publication of a new paperback edition of the book, which had gone out of print in 2004, and with Warner Home Video's release of a 30th-anniversary DVD-boxed set of the mini-series.[24]

In November 2013, the History channel announced that it was developing an eight-hour Roots miniseries with Mark Wolper, son of the original show's original producer David L. Wolper. This version will combine elements from both Haley's book and its 1977 adaptation.[30] Directors will include Thomas Carter and Phillip Noyce, while cast members include Forest Whitaker, Anna Paquin, Laurence Fishburne, Jonathan Rhys Meyers, Derek Luke, Anika Noni Rose, and Chad L. Coleman.[31] 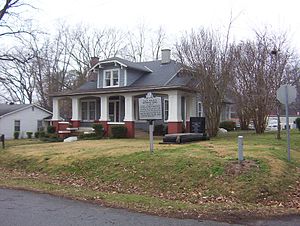 Alex Haley's boyhood home and his grave beside the home (2007) 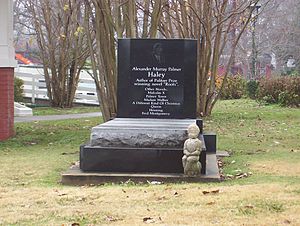 Alex Haley's grave beside his boyhood home in Henning, Tennessee (2007)