Rosa Parks Day was created by the California State Legislature and first celebrated in 2000.[1] The holiday was first designated in the U.S. state of Ohio championed by Joyce Beatty, advocate who helped Ohio's legislation pass to honor the late leader.[2] It is also celebrated by the Columbus Ohio bus system (COTA) with a special tribute to the late civil rights leader.[3] As of 2014, Missouri Governor Jay Nixon proclaimed Rosa Parks Day official in the state.[4] In 2014, Oregon governor Kitzhaber declared that Oregon will celebrate its first Rosa Parks Day.[5] 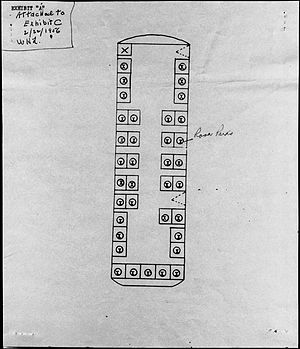 Rosa Parks (February 4, 1913 – October 24, 2005) was a seamstress by profession; she was also the secretary for the Montgomery chapter of the NAACP. Twelve years before her history-making arrest, Parks was stopped from boarding a city bus by driver James F. Blake, who ordered her to board at the back door and then drove off without her. Parks vowed never again to ride a bus driven by Blake. As a member of the NAACP, Parks was an investigator assigned to cases of sexual assault. In 1945, she was sent to Abbeville, Alabama, to investigate the gang rape of Recy Taylor. The protest that arose around the Taylor case was the first instance of a nationwide civil rights protest, and it laid the groundwork for the Montgomery bus boycott.[8]

In 1955, Parks completed a course in "Race Relations" at the Highlander Folk School in Tennessee where nonviolent civil disobedience had been discussed as a tactic. On December 1, 1955, Parks was sitting in the frontmost row for black people. When a Caucasian man boarded the bus, the bus driver told everyone in her row to move back. At that moment, Parks realized that she was again on a bus driven by Blake. While all of the other black people in her row complied, Parks refused, and was arrested[9] for failing to obey the driver's seat assignments, as city ordinances did not explicitly mandate segregation but did give the bus driver authority to assign seats. Found guilty on December 5,[10] Parks was fined $10 plus a court cost of $4[11], but she appealed.

Rosa Park's action gained notoriety leading to the Montgomery Bus Boycott, which was a seminal event in the U.S. Civil Rights Movement, and was a political and social protest campaign against the policy of racial segregation on the public transit system of Montgomery, Alabama. The campaign lasted from December 1, 1955—when Rosa Parks, an African American woman, was arrested for refusing to surrender her seat to a white person—to December 20, 1956, when a federal ruling, Browder v. Gayle, took effect, and led to a United States Supreme Court decision that declared the Alabama and Montgomery laws requiring segregated buses to be unconstitutional.[12] Many important figures in the Civil Rights Movement took part in the boycott, including Reverend Martin Luther King, Jr. and Ralph Abernathy. The 381 day boycott almost bankrupted the bus company and effectively made segregation in buses unconstitutional and illegal.