North Center is one of the 77 community areas of Chicago, Illinois, located in the city's North Side. North Center is bordered on the north by Montrose Avenue, on the south by Diversey Parkway, on the west by the Chicago River and on the east by Ravenswood Avenue; it includes the neighborhoods of Northcenter, Roscoe Village, St. Ben's, and Hamlin Park. The Brown Line of the Chicago 'L' has stops within the community area at Addison, Irving Park and Montrose.

North Center was settled in the latter part of the 19th century and the early 20th century largely by Germans who worked in what is known as the industrial corridor along Ravenswood Avenue, and the large industrial plants along the Chicago River to the west. 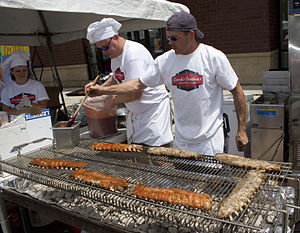 The neighborhood known as Northcenter refers to a neighborhood in the North Side of Chicago, Illinois. Boundaries of Northcenter are Addison on the south, Montrose on the north, the Chicago River on the west and Ravenswood (1800 W) on the east.[3] Northcenter has grown since the 1870s when the area was only accessible by the Chicago River and Little Fort Road (now known as Lincoln Avenue). Northcenter is considered a vibrant neighborhood with an eclectic mix of retailers, restaurants, live music, live theater, and service-oriented businesses. It is also home to some of the best public schools in the City of Chicago. Lane Tech High School, a top ranked well-rounded and diverse high school in the state; as well as Coonley & Bell Elementary. North Center was voted one of Chicago's best neighborhoods by the Chicago Magazine in 2014.[4]

Northcenter’s history is deeply rooted in European cultural influences, and that history can be seen in the architectural charm of the homes and buildings from the late 19th and early 20th centuries. Also during this time, the Selig Polyscope Company produced some of America's earliest motion pictures and was based in Chicago. Along Byron Street near Oakley Ave and Western Ave, historic production buildings of the company are still standing and being used as residences and retail businesses. The neighborhood continues to grow and become more culturally diverse. The neighborhood includes bowling alleys, three city parks - including an indoor ice arena, a nearby library, a nearby movie theater complex, and North Center Town Square. The North Center Chamber of Commerce hosts many free family and community events throughout the year. Northcenter Town Square is also home to a Farmer's Market on Saturdays from June to October. 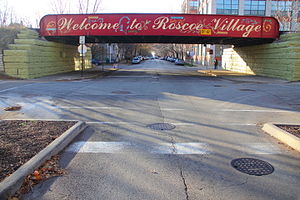 Roscoe Village refers to a neighborhood in the North Side of Chicago, Illinois. While not part of any official city map, Chicago residents perceive the boundaries of the neighborhood to be Addison Street to the north, Belmont Avenue to the south, Ravenswood Avenue to the east and the Chicago River to the west.[5] The primary feature of Roscoe Village is Roscoe Street, which bisects the neighborhood's boundaries between Addison Street and Belmont Avenue. Roscoe Street is populated by businesses and residents. Local historian and longtime neighborhood resident Chuck Betzold notes that people have been living in Roscoe Village since the 18th century, when the area was inhabited by the Fox Indians. Today the area is home to over 6200 residents.

St. Ben's is an unofficial neighborhood with boundaries at Irving Park Road on the north, Addison Street on the south, Damen Avenue on the east, and Western Ave. on the west. It is named for Saint Benedict's Parish, with its Roman Catholic school, on Leavitt Street.[6] It is home to Alexander Graham Bell Elementary, an elite public K-8 school in the city of Chicago.

The Hamlin Park neighborhood is bounded by Belmont Avenue on the north, Ravenswood Avenue on the east, the Diversey Parkway on the south and the North Branch of the Chicago River on the west. It has its namesake park in the center of the neighborhood. This neighborhood also has the northern half of the Julia C. Lathrop Homes, a CHA housing project.