Rose Cecil O'Neill (June 25, 1874 – April 6, 1944) was an American illustrator, artist, and writer who created the popular comic characters, Kewpies. After the growing popularity of O'Neill's Kewpie cartoons upon their publication in 1909, the characters were made into bisque dolls in 1912 by a German toy company, and later in composition material and celluloid. They were wildly popular in the early twentieth century, and are considered to be one of the first mass-marketed toys in America.[1]

O'Neill also wrote several novels and books of poetry, and was active in the women's suffrage movement.[2][3] She was for a time the highest-paid female illustrator in the world upon the success of the Kewpie dolls.[4][5]

O'Neill was born in Wilkes-Barre, Pennsylvania, the second of seven children to William Patrick and Alice Asenath "Meemie" Smith O'Neill. When she was three years old, O'Neill's family relocated to rural Nebraska, where she was raised. From early childhood she expressed significant interest in the arts, immersing herself in drawing, painting, and sculpture.[5] At the age of 13 Rose entered a children's drawing competition sponsored by the Omaha Herald and won first prize.[2] Within two years she was doing illustrations for the Excelsior and The Great Divide and other periodicals, having secured this work with help from the editor at the Omaha World-Herald and the Art Director from Everybody Magazine who had judged the competition. The income helped support her family, which her father had not been able to support as a bookseller.[citation needed]

Later O'Neill's father decided she would do even better if she went to New York City. William Patrick O'Neill took his daughter in 1893 to New York, stopping in Chicago to visit the World Columbian Exposition where she saw large paintings and sculptures for the first time. Before she had only seen such work in her father's books. Once in New York, Rose was left on her own to live with the Sisters of St. Regis. The nuns accompanied her to various publishers to sell work from her portfolio of 60 drawings. Rose sold all her work and took orders for more. Soon she was an extremely popular illustrator and was being paid top dollar for her work. In the September 19, 1896 issue of True magazine O'Neill became the first American woman cartoonist[2] with "The Old Subscriber" cartoon strip.[citation needed]

While O'Neill was in New York, her father made a homestead claim on a small tract of land in the Ozarks wilderness of southern Missouri. The tract had a 'dog-trot' cabin with two log cabins and a breezeway between, with one cabin used for eating and living and the other for sleeping. A year later Rose visited the land, which became known as "Bonniebrook".[6] During this time O'Neill joined the staff of Puck magazine.[citation needed]

A few years later, while in Omaha, Nebraska, Rose met a young Virginian named Gray Latham. He visited O'Neill in New York City, and continued writing to her when she went to Missouri to see her family. After Latham's father went to Mexico to make films, he went to Bonniebrook in 1896. Concerned with the welfare of her family, O'Neill sent much of her paycheck home. With it her family built a 14-room mansion.[citation needed]

In the following years O'Neill became unhappy with Latham, as he liked "living large" and gambling, and was known as a playboy. O'Neill found that Latham, with his very expensive tastes, had spent her paychecks on himself. After her money was stolen by Latham, O'Neill moved to Taney County, Missouri where she filed for divorce in 1901, moving to Bonniebrook permanently.

File:Signs by Rose O'Neill 1904.jpg
"Signs", a cartoon for Puck by Rose O'Neill, 1904.
Ethel: "He acts this way. He gazes at me tenderly, is buoyant when I am near him, pines when I neglect him. Now, what does that signify?"
Her mother: "That he's a mighty good actor, Ethel."

After a short period, O'Neill began receiving anonymous letters and gifts in the mail. She learned they were sent by an assistant editor at Puck. She married Harry Leon Wilson in 1902. After a honeymoon in Colorado, they moved to Bonniebrook, where they lived for the next several winters. During the first three years Harry wrote a novel, for which Rose drew illustrations. One of Harry's later novels, Ruggles of Red Gap, became popular and was made into several motion pictures, including a silent movie, a "talkie" starring Charles Laughton, and then a remake called Fancy Pants starring Lucille Ball and Bob Hope. Harry and Rose divorced in 1907.[citation needed]

As educational opportunities were made available in the 19th-century, women artists became part of professional enterprises, and some founded their own art associations. Artwork made by women was considered to be inferior, and to help overcome that stereotype women became "increasingly vocal and confident" in promoting women's work, and thus became part of the emerging image of the educated, modern and freer "New Woman".[7] Artists "played crucial roles in representing the New Woman, both by drawing images of the icon and exemplifying this emerging type through their own lives." In the late 19th century and early 20th century, about 88% of the subscribers of 11,000 magazines and periodicals were women. As women entered the artist community, publishers hired women to create illustrations that depict the world from a woman's perspective. Other successful illustrators were Jennie Augusta Brownscombe, Jessie Wilcox Smith, Elizabeth Shippen Green, and Violet Oakley.[8] 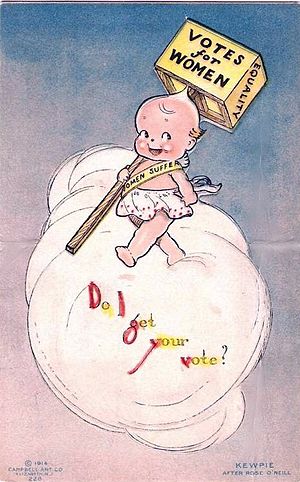 After returning to Bonniebrook, O'Neill concentrated on her artwork. During that period, O'Neill created the whimsical Kewpie characters for which she became known. The cartoon was instantly famous. In 1912, a German porcelain manufacturer started making Kewpie dolls, and that year, O'Neill and her sister went to Germany to demonstrate how to make the dolls the way she wanted them.[citation needed]

Becoming known as the "Queen of Bohemian Society," O'Neill became a women's rights advocate. Her properties included Bonniebrook, an apartment in Washington Square Park in Greenwich Village that inspired the song Rose of Washington Square, Castle Carabas in Connecticut, and Villa Narcissus on the Isle of Capri, Italy. Considered one of the world's five most beautiful women, O'Neill made a fortune of $1.4 million (approximately $15 million in today's dollars).[citation needed]

O'Neill continued working, even at her wealthiest. Perhaps driven by the unfortunate circumstances in her life to express herself, along with the needs of her family, she delved into different types of art. She learned sculpture at the hand of Auguste Rodin (The Thinker) and had several exhibitions of her "Sweet Monsters" in Paris and the United States. She held open salons in her Washington Square apartment where poets, actors, dancers and the 'great thinkers' of her day would gather. O'Neill often continued her drawing until early morning.[citation needed]

In 1937, O'Neill returned to Bonniebrook permanently. By the 1940s, she had lost most of her money and her beautiful homes because of her extravagant nature and after fully supporting her family, her entourage of "artistic" hangers-on and her first husband. The Great Depression hurt O'Neill's fortune. During that period, O'Neill was dismayed to find that her work was no longer in demand. The Kewpie character phenomena, after 30 years of popularity, faded, and photography was replacing illustrating as a commercial vehicle. O'Neill decided to make another doll, eventually creating Little Ho Ho, which was a laughing baby Buddha. However, before plans could be finalized for production of the new little figure, the factory burnt to the ground.[citation needed]

O'Neill became a prominent personality in the Branson, Missouri community, donating her time and pieces of artwork to the School of the Ozarks at Point Lookout, Missouri. She lectured at artists' workshops and continued to address women's groups.[citation needed]

In April 1944, O'Neill died at the home of her nephew in Springfield, Missouri. She is interred in the family cemetery at Bonniebrook next to her mother and several family members.[citation needed]