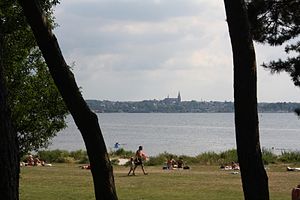 Roskilde Fjord with Roskilde Cathedral in the distance

Roskilde Fjord is the fjord north of Roskilde, Denmark. It is a long branch of the Isefjord.

The cities Frederiksværk, Frederikssund, Jægerspris, Jyllinge and Roskilde, (home to the famous Roskilde Festival), all have coastline at Roskilde Fjord. The image on this page shows the view of the fjord, as seen from Roskilde.

During the Viking time around 1000 AD the people of Roskilde decided to sink a number of their ships in the fjord at Skuldelev in order to prevent the Vikings from coming in and raiding.[1] Originally five were discovered; but while extending the museum that houses these finds another nine were uncovered.[2]