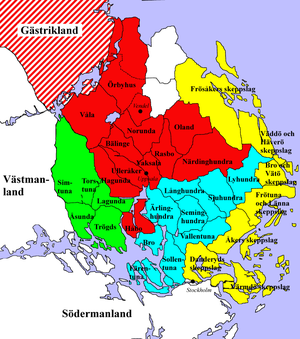 The coastline has changed considerably in the last millennium due to post-glacial rebound. Originally there was a sea bay coming in from the north all the way into Uppsala. Roslagen is the modern name for the area which roughly corresponds to what was called Roden in the Middle Ages.

Roslagen is the name of the coastal areas of Uppland province in Sweden, which also constitutes the northern part of the Stockholm archipelago.

Historically, it was the name for all the coastal areas of the Baltic Sea, including the eastern parts of lake Mälaren, belonging to Svealand. The name was first mentioned in the year 1493 as "Rodzlagen".[1] Before that the area has been known as Roden, which is the coastal equivalent to inland Hundreds. When the king would issue a call to leidang, the Viking Age equivalent of military conscript service, a Roden district was responsible for raising a number of ships for the leidang navy.

The name comes from Roslagen word “rodslag” which in coastal Uppland is an old word for a rowing crew of warrior oarsmen.[2] Etymologically, Roden, or Roslagen, is the source of the Finnish and Estonian names for Sweden: Ruotsi and Rootsi.[3][4]

A person from Roslagen is called "Rospigg" which means "inhabitant of Ros". Swedes from the Roslagen area, that is "the people of Ros", gave name to the Ros/Rus people and through that to the state of Russia (for further reading see Rus (name)).[5]

The area also gives its name to the endangered domesticated Roslag sheep, which originated from the area centuries ago. It is served by the narrow-gauge Roslagsbanan railway network from Stockholm.