Ross-shire (Scottish Gaelic: Siorrachd Rois) is a historic county in the Scottish Highlands. The county borders Sutherland, Cromartyshire (of which it contains many exclaves), Inverness-shire and an exclave of Nairnshire. It includes most of Ross as well as Lewis in the Outer Hebrides. Dingwall is the traditional county town. 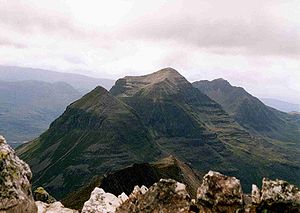 Liathach seen from Beinn Eighe. With the Munro “Top“ of Stuc a' Choire Dhuibh Bhig (915 metres) in the foreground and the two Munro summits in the background. 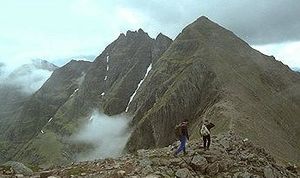 Sgurr Fiona and the Corrag Bhuidhe pinnacles on An Teallach 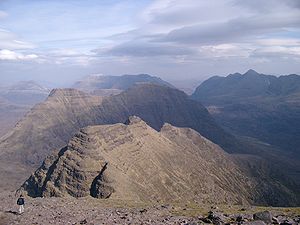 View east from Sgurr Mhòr over the "Horns"

Wester Ross is well known for its mountain scenery, especially the Torridon Hills which includes such peaks as Beinn Eighe and Liathach. Although many peaks in the North-west Highlands exhibit Torridon geology, the Torridon hills are generally considered only to be those in the Torridon Forest to the north of Glen Torridon. Specifically, these are:

The Torridon Hills exhibit some of the most dramatic mountain scenery in the British Isles, surpassed in grandeur probably only by the Cuillins of Skye. Other notable peaks include An Teallach and Slioch. The landscape is dominated by the Torridonian sandstone, a Precambrian and very old rock formation. Each of the Torridon Hills sits very much apart from each other, and they are often likened to castles. They have steep terraced sides, and broken summit crests, riven into many pinnacles. There are many steep gullies running down the terraced sides. The summit ridges provide excellent scrambling, and are popular with hill walkers and mountaineers. However, like many ridge routes, there are few escape points, so once committed, the scrambler or hillwalker must complete the entire ridge before descent. The area is thinly populated, so walkers need to come fully prepared. Under winter conditions, many walking routes become serious expeditions.

The four most prominent ancient Scottish clans in mainland Ross-shire were the Clan Ross whose chiefs once held the title Earl of Ross, Clan Munro, Clan MacKenzie, and Clan Chisholm.[citation needed]