Roswell is a city in New Mexico. It is the county seat of Chaves County in the southeastern quarter of the state of New Mexico, United States.[2] As of the 2010 census it had a population of 48,411,[3] making it the fifth-largest city in New Mexico. It is a center for irrigated farming, dairying, ranching, manufacturing, distribution, and petroleum production. It is also the home of New Mexico Military Institute (NMMI), founded in 1891. Bitter Lake National Wildlife Refuge is located a few miles northeast of the city on the Pecos River. Bottomless Lakes State Park is located 12 miles (19 km) east of Roswell on US 380.

Roswell is most popularly known for having its name attached to what is now called the 1947 Roswell UFO incident, though the crash site of the alleged UFO was some 75 miles (121 km) from Roswell and closer to Corona. The investigation and debris recovery was handled by the local Roswell Army Air Field. 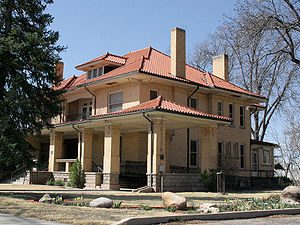 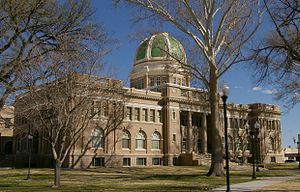 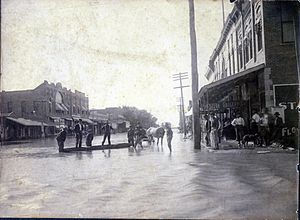 The first nonindigenous or Hispanic settlers of the area around Roswell were a group of pioneers from Missouri, who attempted to start a settlement 15 miles (24 km) southwest of what is now Roswell in 1865, but were forced to abandon the site because of a lack of water. It was called Missouri Plaza. It also had many Hispanic people from Lincoln, New Mexico. John Chisum had his famous Jingle Bob Ranch about 5 miles (8 km) from the center of Roswell, at South Spring Acres. At the time, it was the largest ranch in the United States.

Van C. Smith, a businessman from Omaha, Nebraska, and his partner, Aaron Wilburn, constructed two adobe buildings in 1869 that began what is now Roswell. The two buildings became the settlement's general store, post office, and sleeping quarters for paying guests. In 1871, Smith filed a claim with the federal government for the land around the buildings, and on August 20, 1873, he became the town's first postmaster. Smith was the son of Roswell Smith, a prominent lawyer in Lafayette, Indiana, and Annie Ellsworth, daughter of U.S. Patent Commissioner Henry Leavitt Ellsworth. He called the town Roswell, after his father's first name.

In 1877, Captain Joseph Calloway Lea and his family bought out Smith and Wilburn's claim and became the owners of most of the land of Roswell and the area surrounding it. The town was relatively quiet during the Lincoln County War (1877–1879). A major aquifer was discovered when merchant Nathan Jaffa had a well drilled in his back yard on Richardson Avenue in 1890, resulting in the area's first major growth and development spurt. The growth continued when a railroad was built through town in 1893.

During World War II, a prisoner-of-war camp was located in nearby Orchard Park. The German prisoners of war were used to do major infrastructure work in Roswell, such as paving the banks of the North Spring River. Some POWs used rocks of different sizes to create the outline of an iron cross among the stones covering the north bank. Later, the iron cross was covered with a thin layer of concrete. In the 1980s, a crew cleaning the river bed cleared off the concrete and revealed the outline once more. The small park just south of the cross was then known as Iron Cross Park. On November 11, 1996, the park was renamed POW/MIA Park. The park displays a piece of the Berlin Wall, presented to the city of Roswell by the German Air Force.

In the 1930s, Roswell was a site for much of Robert H. Goddard's early rocketry work. (The Roswell Museum and Art Center maintains an exhibit which includes a recreation of Goddard's rocketry development workshop.)

Roswell was a location of military importance from 1941 to 1967. In 1967, the Walker Air Force Base was decommissioned. After the closure of the base, Roswell capitalized on its pleasant climate and reinvented itself as a retirement community. 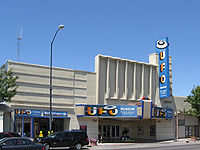 Roswell has benefited from interest in the alleged UFO incident of 1947. It was the report of an object that crashed in the general vicinity in June or July 1947, allegedly an extraterrestrial spacecraft and its alien occupants. Since the late 1970s, the incident has been the subject of intense controversy and of a conspiracy theory regarding a classified program named "Mogul". Many UFO proponents maintain that an alien craft was found and its occupants were captured, and that the military then engaged in a cover-up. In recent times, the business community has deliberately sought out tourists interested in UFOs, science fiction, and aliens.

Roswell hosted the record-breaking skydive by Felix Baumgartner on October 14, 2012.[4] 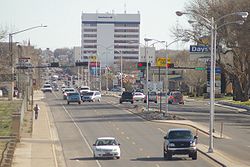 Roswell is located in the High Plains and has four very distinct seasons, giving it a BSk or BSh semiarid climate according to the Köppen climate classification. Winters are cold, but usually sunny, and snowfall is a common occurrence. Spring is mild and usually warm, but can still be cold on occasion. Summers are hot (as is common with the High Plains of New Mexico and Colorado) and, quite frequently, the temperature rises above 100°F, which can be unpleasant. The North American monsoon occurs during the summer, and can bring torrential downpours, severe thunderstorms (with high winds and hail) and sometimes even tornadoes. The rain can provide a cooling relief from the scorching desert heat. Fall is mild and pleasant, but can be cold. Snow is possible in October and November.