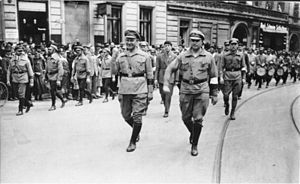 The Roter Frontkämpferbund[1] German: [ˈʁoːtɐ ˈfʁɔntˌkɛmpfɐˌbʊnt], "Alliance of Red Front-Fighters"), abbreviated RFB, was officially a non-partisan and legally registered association, but in practice a paramilitary organization under the leadership of the Communist Party of Germany during the Weimar Republic.

The first local groups of the RFB were established in July 1924 and Ernst Thälmann was elected the first leader of the federal committee during the first nationwide meeting in February 1925 in Berlin. Die Rote Front (English: The Red Front) was the newspaper of the RFB. The greeting of “Rot Front!” (English: Red Front!) while rising a clenched fist was responsible for the expression Rotfront, often used among friends and foes to refer to the organization instead of using the entire title of the alliance. The clenched fist "protecting the friend, fighting off the enemy" (German: "schützend den Freund, abwehrend den Feind") was the symbol of the RFB used on all its insignias and its registered trademark since March 1, 1926.

Founded as a proletarian defense organization for the working class, over the years the RFB engaged more and more in violent street fights with the police, the Nazi party's Sturmabteilung (SA) as well as other political rivals and after their participation in the bloody protests following the ban to celebrate the International Workers' Day in Berlin 1929, during which more than 30 people were shot and killed by the police, the organization was banned in 1929 and all its assets confiscated by the government. At the time of the ban, the RFB had close to 130,000 members of which a large part continued their activities illegally or in local successor organizations such as the Kampfbund gegen den Faschismus (English: Fighting-Alliance Against Fascism), while others retired from the political scene. Contrary to a self-perpetuating legend spread by later historians, defections to the SA were rare .[2]

After the takeover of the political power in Germany by the Nazis in 1933, former RFB-members were among the first arrested and incarcerated in the concentration camps of the Sturmabteilung (SA). The Nazis were seeking revenge on their former rivals and many of the Red Front-Fighters lost their lives in the Nazi prisons.

Of those who survived or were able to avoid arrest, many followed the call of the Second Spanish Republic during the Spanish Civil War (1936–39) and joined the Centuria Thälmann of the International Brigades to fight against the Nationalists led by General Francisco Franco. During World War II former Red Front-Fighters were fighting within the ranks of the soviet Red Army against Nazi Germany.

After the end of World War II former RFB-members such as Erich Honecker and Erich Mielke were actively involved in the creation of the first police and military units of the German Democratic Republic (GDR). In East Germany the traditions of the RFB were carried on in the Arbeiterkampfgruppen (English: Combat Groups of the Working Class) and the Nationale Volksarmee (English: National People's Army ), while the Federal Republic of Germany in West Germany enforced the ban of 1929 and prosecuted former Red Front-Fighters admitting to their activities as members of the RFB.

Until 1923 the Communist Party of Germany could depend on the Proletarian Hundreds (German: Proletarische Hundertschaften) to secure their meetings and demonstrations. After the ban of this proletarian defense organization in 1923, the Communist Party of Germany was in need to protect their political activities against attacks from the police and right-wing paramilitary organizations such as the Stahlhelm, Bund der Frontsoldaten and the Sturmabteilung. During the 9th national conference of the Communist Party of Germany in April 1924 it was decided to form a new defense organization, under the name Roter Frontkämpfer-Bund. The goal was to attract non-communist workers and lead them as a united front. The incidents in the City of Halle/Saale on May 11, 1924, where 8 workers were killed and 16 seriously wounded by shots fired by the police during a demonstration, the decision was made public to all local organizations of the party and soon after the first local RFB-groups were formed. Most of these first RFB-units were located in industrial cities, seaports and other traditional strongholds of the working class.

While many RFB-groups were under the leadership of a member of the Communist Party of Germany, most Red Front-Fighters were non-party members and some were even members of the Social Democratic Party of Germany or other political organizations. 98% of the RFB-members belonged to the working class and only 1% had received a higher education. A large part of the RFB-members were former front-fighters as they had served as soldiers on the battlefields of World War I and some had later been actively involved in the November Revolution of 1918. The number of members grew constantly and reached their peak with close to 130,000 members at the time of the ban in 1929.

The larger part of its members did not join the RFB because of political ideologies, they were mostly hard working people without any political education who simply believed that it was the right organization to fight for better living conditions. While the essential connection within the Nazi’s Sturmabteilung for instance, was achieved by their military orientation, within the RFB there was a higher level of social homogeneity. The sense of a common bond, achieved through the constant propagation of a class-consciousness, the feeling of solidarity and camaraderie, the cohesion within the group was what made the RFB fascinating for many. It was also not uncommon for members of the often internal strife-torn Sturmabteilung (SA) or the Reichsbanner to change sides and join the RFB.[citation needed]

At the time of the ban in 1929, only 30% of the RFB-members were actually members of the Communist Party of Germany and 70% were non-party or members of other parties.

For its younger members between the ages of 16 and 21 the RFB initially formed the Roter Jungsturm (English: Red Young-Storm) who was renamed into Rote Jungfront (RJ) (English: Red Young-Front) in 1925 to avoid similarities with the stormtroopers of the Nazis Sturmabteilung and to underline their goal of a united front. 40% of the local RFB-groups had a section of the RJ.

To honor the sailors of the imperial navy who fought during the November Revolution of 1918, in May 1925 the RFB founded the Rote Marine (RM) (English: Red Navy) with sections in all major port cities. The Rote Marine was also considered an elite unit.

Since 1925 the female members were organized in the Roter Frauen und Mädchen Bund (RFMB) (English: Alliance of Red Women and Girls). The federal leader was Clara Zetkin and at the time of ban in 1929 the RFMB had about 4,000 members.

3.1. Abteilung (X Kameradschaften) (English: Division made up of X Comradeships)

Intents to form local RFB groups in the cities of Nuremberg and Munich in 1925 were banned by the state of Bavaria. Until 1928 there existed no official RFB groups in Bavaria.

A large part of the RFB activities were directed on supporting the political propaganda work of the Communist Party of Germany (German: Kommunistische Partei Deutschlands (KPD)), the Rote Hilfe (English: ”Red Help”) and other proletarian organizations such as workers unions. In most cases they provided a security-service for the various events but also participated in the active agitation. Hardened by their harsh work and living conditions, the RFB men were not afraid of using their fists and soon became respected by the police and political rivals who tried to disrupt rallies.

It was not uncommon for street parades and protest marches to be escorted by police and RFB men in a mutually respectful distance. While the ‘‘Red Front Fighters’’ were trying to keep eventual provocateurs from disrupting the ongoing manifestations and had an interest in a successful propaganda event, the police in most cases was looking for a reason to break up the demonstrations of the Communists and often used excessive force against the rally participants at the slightest sign of trouble. Numerous events ended in mass brawls between the police and members of the ‘‘RFB’’ leaving injured on both sides and in some cases dead demonstrators shot by the police. Almost all of the incidents led to the arrest and sentencing of many RFB men.

Arrested RFB members could depend on the Rote Hilfe (English: ”Red Help”) for legal support and also, in case of sentencing to prison, for financial support of their families during the time they were unable to work.

During the years of its existence the rivalry between the warring organizations such as the Sturmabteilung, the Stahlhelm and the Reichsbanner grew constantly and violence intensified. Since the strategy of the Sturmabteilung (SA) was especially designed to take the political fight to the streets and provoke rivals wherever they could, violent encounters between members of these two organizations soon became a part of everyday life. The SA purposely opened new haunts in working-class districts in which a large part of the population were ‘‘red’’, meaning they supported either the Social Democratic Party of Germany ‘‘SPD’’ or the Communist Party of Germany ‘‘KPD’’ but not the ‘‘brown’’ Nazi Party the Sturmabteilung (SA) stood for. For their rallies the Sturmabteilung almost exclusively chose locations within these districts, knowing that especially the RFB men were not willing to let these provocations go by quietly and many events from either side resulted in violent mass brawls. Attacks on a single member or smaller groups on the streets were often retaliated against with attacks by entire RFB units at known meeting points or favourite hangouts of the Sturmabteilung. Overall the mostly young and often out-of-work ruffians from the Sturmabteilung had a tough time against the ‘‘Red Front Fighters’’ until the RFB was banned in 1929. Especially in larger industrial areas where a high percentage of working class people lived, reportedly the single call “RFB is here!” (German: ”RFB ist da!”) at the door of a pub filled with SA men would cause panic among those present.

RFB men were not only present at meetings, rallies or other events but also helped out in their neighbourhoods whenever a strong hand was needed. During the years of the Depression in the late 1920s and early 1930s many workers for instance could not pay the rent on their poor dwellings on time. Whenever a landlord tried to throw out the residents, members of the RFB would show up and try to prevent the police or the landlord’s representatives from putting their neighbours out on the street. Police reports of the time acknowledge the fact that in many cases the trained fists of the RFB men were a more powerful weapon than the truncheons of the police.

As anchored in its statues, the ‘’RFB’’ was an anti-militaristic organization and therefore many of its activities were directed against the re-armament of the German military. The RFB and other organizations for instance protested against the spending of billions of Reichsmark for the purchase of armoured warships by the government of the Weimar Republic and demanded the use of these resources to improve the social welfare system.

Most public manifestations were openly directed against the politics of the German government and their involvement with powerful German industrials. They demanded the preservation of peace and denounced plans for a new war. Most members of the ‘’RFB’’ also supported the call of the left-wing ‘’KPD’’ for a change of the social system to the role model of the young Soviet Union. The ‘’RFB’’ therefore was soon considered an ‘’enemy of the state’’, leading to several temporary bans of its announced parades and meetings.

Other RFB events included propaganda marches in rural areas to get poor farmers and agricultural workers to join their cause.