The Rotunda at the University of Virginia, famously designed by the third US president Thomas Jefferson.

A rotunda (from Latin rotundus) is any building with a circular ground plan, and sometimes covered by a dome. It can also refer to a round room within a building (a famous example being within the United States Capitol in Washington, D.C.). The Pantheon in Rome is a famous rotunda. A Band Rotunda is a circular bandstand, usually with a dome.

The rotunda has historical and architectural value because it was widespread in medieval Central Europe. A great number of parochial churches were built in this form in the 9th to 11th centuries BCE in Central Europe. This type of circular shaped parochial building can be found in great number in Hungary, Poland, Slovakia, Croatia, Austria, Bavaria, Dalmatia, Germany, and the Czech Republic. It was thought of as a structure descending from the Roman Pantheon. However, it can be found mainly not on former Roman territories, but in Central Europe. Generally its size was 6–9 meters inner diameter and the apsis was directed toward the east. Sometimes 3 or 4 apsides were glued to the central circle and this type has relatives even in the Caucasus.

Rotunda in the Carpathian Basin 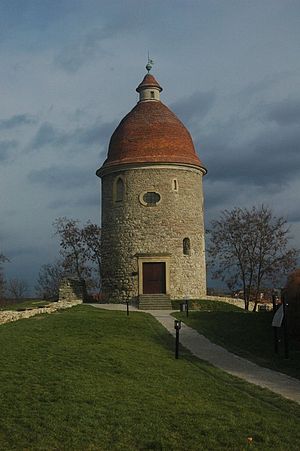 Several types of rotundas are found in the Carpathian Basin, within the former boundaries of Medieval Hungary. The role and form developed from gradual enlargements of ancient small village churches. Many of them still stand today, e.g. in Nagytótlak, Kallósd and Kissikátor in Hungary or in Bíňa and Šivetice in Slovakia. In many places the ancient foundations have been excavated and conserved. The village church of Sárospatak is complete with a simple circular nave and an eastern apse. The church of Alagimajor at Dunakeszi was enlarged toward the apse in the 14th century. More significant enlargement of the central rotunda is seen at Isaszeg where the extension extended toward the East and West; the rotunda foundations can also be seen in the central portion of the nave of the Gothic church. In many cases the rotunda was used as the apse of the village's new and larger church (Bagod-Szentpál, Hidegség, Vágkeresztur, Ipolykiskeszi, Herencsény, Szalonna). Such semi-circle apses are preserved all over the Carpathian Basin. Rotundas of six apses, a most interesting form, are found at Karcsa, Kiszombor in Hungary, at Horjany in Ukraine and several places in Armenia (Aragatz, Bagaran, Bagnayr, Botshor, Kiagmis Alti).

Rotunda in the Caucasus

There is an interesting connection between Central European and Caucasian rotundas of the 9th to 11th centuries BCE. Several Armenian built rotunda churches have sixfold arched central apsis, i.e. at Aragatz, Bagaran, Bagnayr, Botshor, Kiagmis Alti in Armenia. At the same time eightfold arched central buildings (rotunda) are also frequently occurring in Armenia: Ani, Irind, Varzhahan. It was a suggestion (Csemegi J.) that there was not only western European but Eastern Caucasian relation for architects of Hungary of this age of king I. Stephen of Hungary. 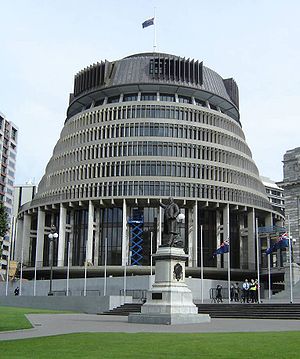 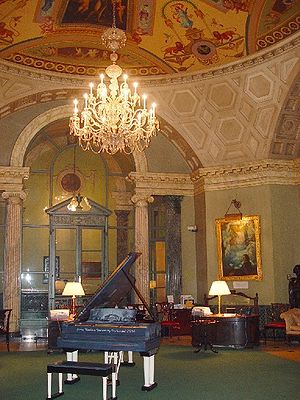 Interior of the rotunda at New York City's Steinway Hall with an Art Case Piano by artist Mia LaBerge in the foreground.