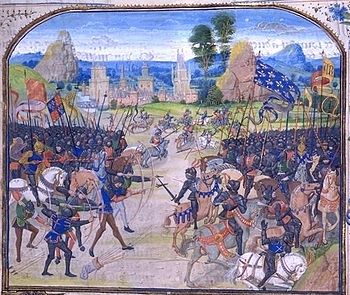 The Battle of Poitiers in 1356. A variety of horses can be seen

The term rouncey (also spelt rouncy or rounsey) was used during the Middle Ages to refer to an ordinary, all-purpose horse. They were used for riding, but could also be trained for war. It was not unknown for them to be used as pack horses.

While the destrier is the most well-known warhorse of the Medieval era, it was the least common, and coursers were often preferred for hard battles. They were both expensive, highly trained horses prized by knights and nobles, and the poorer knight, squire or man-at-arms would use a rouncey for fighting. A wealthy knight would provide rounceys for his retinue.[1][2]

Sometimes the expected nature of warfare dictated the choice of horse; when a summons to war was sent out in England, in 1327, it expressly requested rounceys, for swift pursuit, rather than destriers.[3]