From Infogalactic: the planetary knowledge core
Jump to: navigation, search
This article is about the game. For the movie, see Rounders (film). For other uses, see Rounder (disambiguation).

Rounders (Irish: cluiche corr) is a bat-and-ball game played between two teams. Rounders is a striking and fielding team game that involves hitting a small, hard, leather-cased ball with a rounded end wooden, plastic or metal bat. The players score by running around the four bases on the field.[1][2] The game is popular among Irish and British school children.[3][4]

Gameplay centres on a number of innings, in which teams alternate at batting and fielding. A maximum of nine players are allowed to field at any time. Points (known as 'rounders') are scored by the batting team when one of their players completes a circuit past four bases without being put 'out'.

The game of rounders has been played in England since Tudor times,[1] with the earliest reference[1][5] being in 1744 in A Little Pretty Pocket-Book where it was called "base-ball"[6] by John Newbery. In 1828, William Clarke in London published the second edition of The Boy's Own Book, which included the rules of rounders and which contained the first printed description in English of a bat and ball base-running game played on a diamond.[7] The following year, the book was published in Boston, Massachusetts.[8]

The first nationally formalised rules were drawn up by the Gaelic Athletic Association (GAA) in Ireland in 1884. The game is still regulated by the GAA in Ireland. In Great Britain it is regulated by Rounders England, which was formed in 1943. While the two associations are distinct, they share similar elements of game play and culture. Competitions are held between teams from both traditions, with games alternating between codes and one version being played in the morning and the other in the afternoon.

After the rules of rounders were formalised in Ireland, associations were established in Liverpool and Scotland in 1889. Both the 'New York game' and the now-defunct 'Massachusetts game' versions of baseball, as well as softball, share the same historical roots as rounders and bear a resemblance to the GAA version of the game. Rounders is linked to British baseball, which is still played in Liverpool, Cardiff and Newport. Although rounders is assumed to be older than baseball, literary references to early forms of 'base-ball' in England pre-date use of the term rounders. The game is now played up to international level.

While Rounders England[9] and GAA[10] codes differ, they share much in common.

The bowler, or 'feeder', bowls the ball with an underarm pendulum action to the batter. According to Rounders England rules, the ball is deemed a 'good' ball if it passes within reach on the striking side between the batter's knees and the top of the head. Otherwise, it is called a 'no-ball' or 'bad' ball. The ball is also regarded as bad if it is thrown into the batter's body or wide of the batting box. A batter may try to hit a bad ball but is not required to do so. A player is not out if a no-ball is caught and can't be called out on first base.

When a batter leaves the post, each runner on a post may run to the next and succeeding posts. A post runner cannot be declared out when standing at a post. The batter must keep in contact with the post to avoid being declared out. A rounder is scored if one of the batting team completes a circuit without being out. The NRA rules state that a half rounder is scored if half a circuit is completed by a player without being put out, or if the batter has not hit the ball but makes it all the way to the fourth base. A batter is out if a fielder catches the ball cleanly; the batter reaches a base that had been 'stumped' by a fielder; the bat is dropped whilst the batter is running; the batter leaves the base before the bowler has bowled the ball; the batter is 'run out' by the next batter. 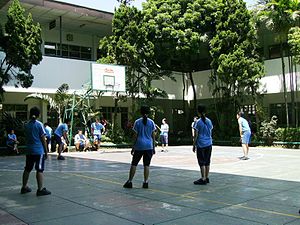 A game of Rounders being played in Indonesia.

In the United Kingdom, the rules of rounders are regulated by Rounders England.[11] Games played under these rules use smaller bats and balls and are played on a smaller pitch compared to GAA games. The bases are marked with posts, which batters must keep in contact with and fielders must 'stump', and only one 'good' ball need normally be thrown before a batter must run. 'Half-rounders' are also counted in scoring.

The fielding team must field a minimum of six players. The total number of players on a team is limited to nine.

The ball circumference must be between 180 millimetres (7.1 in) and 200 millimetres (7.9 in) and the bat no more than 460 millimetres (18 in) in length and 170 millimetres (6.7 in) in diameter. Rounders England place a weight-limit of 370 grams (13 oz) on the bat. The bases are laid out in a manner similar to a baseball diamond, except that home base is a separate base, at right-angles to third base and the batsman's base.[12] Each base is marked with poles, which must be able to support themselves and stand at a minimum of 1 metre (3 ft 3 in).

If a ball is delivered well, batters must try to hit the ball and must run regardless of whether the ball is hit. If the ball is hit into the backward area, the batter may not pass first post until the ball is returned to the forward area. A batter that hits a no-ball may not be caught out or stumped at the first post. Batters may run on 'no-balls' but do not have to. Each batter, except the last in each inning, is entitled to receive one good ball: the last batter is entitled to receive three good balls unless he or she is caught out.

A batter is out if a fielder catches the ball after it has been hit and before it touches the ground, a fielder touches the post of the base halfway up (or higher) whilst running to it, or another batter runs to the same base or overtakes a batter, in which case both batters are out.

Two innings constitute a game. Each batting team's innings continues until nine outs are made or the numbered innings is over. 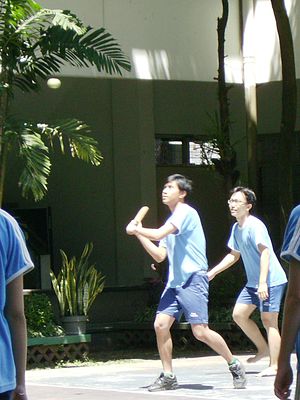 A batter is attempting to give a good hit

In Ireland, the rules of rounders (Irish: cluiche corr) are laid down by the Gaelic Athletic Association.[13] The GAA rules are the earliest nationally organised rules of play, being formalised in 1884. It is played on a larger pitch compared to the NRA game and consequently uses larger bats and slightly larger balls. A GAA rounders pitch is a 70 metres (77 yd) square field and bases are 25 metres (27 yd) apart, compared to 12 metres (13 yd) for the NRA game. Foul ground runs along two adjacent sides of the pitch with home base at the intersection of these sides.

Three substitutes may be made to the list of field players during play. A maximum of nine players are allowed to field at one time. There is no limit for the number of batters a team may list.

Each batter is entitled to three good balls. A batter must try to hit any good balls that are bowled, but need not run hitting the ball. If a ball is struck that would otherwise be considered 'bad', the ball is then considered to be 'good'. If, on the first or second good ball, a ball is hit into the foul ground, or the ball is hit but no running occurs, it is considered a 'dead' ball and the batter or runners may not advance. If a batter receives three bad balls then a 'walk-on' is called and all runners advance one base. The batter may run on any ball except a dead ball. The batter is not allowed to drop the bat whilst running or that person is out and no rounders are scored.

A batter is out if:

Batters must run in straight lines between bases and fielders must not obstruct their way or stand on bases. Disobeying this rule is considered unsporting behaviour and may result in up to two bases being awarded to the batting team or a batter being sent out. Normally, one batter may not overtake another while running between bases, although there are exceptions to this rule.

Five innings constitute a game, depending on the level of the match. Each batting team's inning continues until three outs are made.

Comparison with softball and baseball

The GAA version of rounders is very similar to softball, the main difference being that the game is played with baseball-sized bats, balls and field. However, baseball-style gloves are not allowed. The main differences between baseball and the Rounders England version of the game are that the bat is much shorter and is usually swung one-handed; misses or strikes are not called, so there are no walks or strike-outs; each batter receives only one good ball and must run whether he or she hits it or not. Other differences include the posts for marking the bases, which should be wooden, and are preferably encased in plastic sheaths, the lay-out of the pitch, especially the location of home base and the bowler's pitch, which is an underarm pendulum action, as in softball.