From Infogalactic: the planetary knowledge core
(Redirected from Roundheads)
Jump to: navigation, search
This article is about the Parliamentarians during the English Civil War. For other uses, see Roundhead (disambiguation). 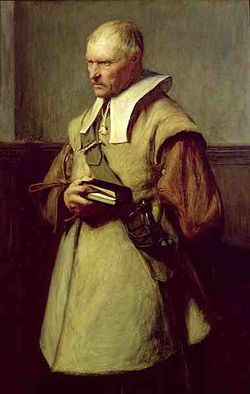 A Roundhead by John Pettie

Roundhead was the name given to the supporters of the Parliament of England during the English Civil War. Also known as Parliamentarians, they fought against Charles I of England and his supporters, the Cavaliers or Royalists, who claimed rule by absolute monarchy and the divine right of kings.[1] The goal of the Roundhead party was to give the Parliament supreme control over executive administration.[2]

Most Roundheads appear to have sought a constitutional monarchy in place of the absolutist monarchy sought by Charles I. However, at the end of the English Civil War in 1649, public antipathy towards the king was high enough to allow republican leaders such as Oliver Cromwell to abolish the monarchy completely and establish the Commonwealth of England.

The Roundhead commander-in-chief of the first Civil War, Thomas Fairfax, remained a supporter of constitutional monarchy, as did many other Roundhead leaders such as Edward Montagu, 2nd Earl of Manchester and Robert Devereux, 3rd Earl of Essex; however, this party was outmanoeuvred by the more politically-adept Cromwell and his radicals, who had the backing of the New Model Army and took advantage of Charles' perceived betrayal of England by allying with the Scottish against Parliament.[citation needed]

England's many Puritans and Presbyterians were almost invariably Roundhead supporters, as were many smaller religious groups such as the Independents. However many Roundheads were Church of England, as were many Cavaliers.

Roundhead political factions included the proto-anarchist Diggers, the diverse group known as the Levellers and the apocalyptic Christian movement of the Fifth Monarchists. 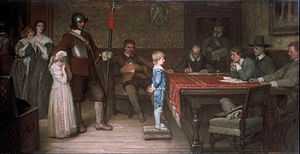 A Roundhead inquisitor asks a son of a Cavalier, "And when did you last see your father?" — William Frederick Yeames (1878).

Some Puritans, but by no means all, wore their hair closely cropped round the head or flat and there was thus an obvious contrast between them and the men of courtly fashion, who wore long ringlets.[3]

During the war and for a time afterwards, Roundhead was a term of derision[3]—in the New Model Army it was a punishable offence to call a fellow soldier a Roundhead.[4] This contrasted with the term "Cavalier" to describe supporters of the Royalist cause. Cavalier also started out as a pejorative term—the first proponents used it to compare members of the Royalist party with Spanish Caballeros who had abused Dutch Protestants during the reign of Elizabeth—but unlike Roundhead, Cavalier was embraced by those who were the target of the epithet and used by them to describe themselves.[4]

"Roundheads" appears to have been first used as a term of derision toward the end of 1641, when the debates in Parliament in the Clergy Act 1640 were causing riots at Westminster. The Encyclopædia Britannica Eleventh Edition quotes a contemporary authority's description of the crowd gathered there: "They had the hair of their heads very few of them longer than their ears, whereupon it came to pass that those who usually with their cries attended at Westminster were by a nickname called Roundheads".[3] The demonstrators included London apprentices and Roundhead was a term of derision for them because the regulations to which they had agreed included a provision for closely cropped hair.[4]

According to John Rushworth the word was first used on 27 December 1641 by a disbanded officer named David Hide, who during a riot is reported to have drawn his sword and said he would "cut the throat of those round-headed dogs that bawled against bishops".[5]

However, Richard Baxter ascribes the origin of the term to a remark made by Queen Henrietta Maria of France at the trial of Thomas Wentworth, 1st Earl of Strafford, earlier that year. Referring to John Pym, she asked who the roundheaded man was.[3] The principal advisor to Charles II, Edward Hyde, 1st Earl of Clarendon, remarked on the matter, "and from those contestations the two terms of Roundhead and Cavalier grew to be received in discourse, ... they who were looked upon as servants to the king being then called Cavaliers, and the other of the rabble contemned and despised under the name of Roundheads."[6]

Ironically, after Anglican Archbishop William Laud made a statute in 1636 instructing all clergy to wear short hair, many Puritans rebelled to show their contempt for his authority and began to grow their hair even longer (as can be seen on their portraits)[7] though they continued to be known as Roundheads. The longer hair was more common among the "Independent" and "high ranking" Puritans (which included Cromwell), especially toward the end of the Protectorate, while the "Presbyterian" (i.e. non-Independent) faction, and the military rank-and-file, continued to abhor long hair. By the end of this period some Independent Puritans were again derisively using the term Roundhead to refer to the Presbyterian Puritans.[8]

Roundhead remained in use to describe those with republican tendencies up until the Exclusion Crisis of 1678–1681; the term was then superseded by "Whig", initially another term with pejorative connotations. Likewise during the Exclusion Bill crisis, the term Cavalier was replaced with "Tory", an Irish term introduced by their opponents, and also initially a pejorative term.[9]