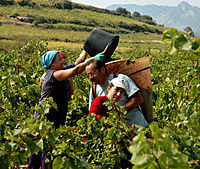 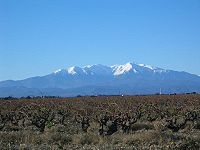 A snow-capped Mount Canigó (Canigou) (2785m) across the Roussillon plain.

Roussillon (/ˈruːsɪjɒn/[1] or /ˌruːsiːˈjoʊn/; French: [ʁu.si.jɔ̃]; Catalan: Rosselló [rusəˈʎo]) is one of the historical counties of the former Principality of Catalonia, corresponding roughly to the present-day southern French département of Pyrénées-Orientales (Eastern Pyrenees). It may also refer to Northern Catalonia or French Catalonia, the first used by Catalan-speakers and the second used by French-speakers. A 1998 survey found that 34% of respondents stated they speak Catalan, and a further 21% understand it.

Also a French province before the Revolution (and Spanish before the Thirty Years' War), Roussillon derived its name from Ruscino (Rosceliona, Castel Rossello), a small fortified place near modern-day Perpignan where Gaulish chieftains met to consider Hannibal's request for a conference. The region formed part of the Roman province of Gallia Narbonensis from 121 BC to AD 462, when it was ceded with the rest of Septimania to the Visigoth Theodoric II. His successor, Amalaric, on his defeat by Clovis in 531 retired to Hispania, leaving a governor in Septimania.

In 719, the Saracens crossed the Pyrenees and maintained political hegemony of Septimania until their final defeat by Pepin the Short in 759, who went on to occupy Roussillon after conquering Narbonne. Roussillon was occupied by Carlolengians in 760. On the invasion of Hispania in 778, Charlemagne found the Marca Hispanica wasted by war and the inhabitants settled in the mountains. He granted some lands in the plains to Visigothic refugees from Moorish Hispania and founded several monasteries. In 792, the Saracens again invaded France, but they were repulsed by William, Count of Toulouse - regent of the child Louis the Pious, King of Aquitaine - whose hegemony extended into Catalonia.

The different portions of his kingdom in time grew into allodial fiefs, and in 893, Sunyer II became the first hereditary Count of Roussillon. But his rule only extended over the eastern part of what became the later province. The western part, the Cerdanya (French, Cerdagne), was ruled in 900 by Miró as first count, and one of his grandsons, Bernat, became the first hereditary count of the middle portion, or Besalú. The Counts of Roussillon were allied to their cousins the Counts of Empúries in a centuries-long conflict with the surrounding great nobles. Count Girard I participated in the First Crusade in the following of Raymond IV of Toulouse, and was one of the first to set foot in Jerusalem when it was stormed by the Crusaders in 1099. At the beginning of the 12th century, the prestige of the Counts of Barcelona began to rise to such a height that the Counts of Roussillon had no choice but to swear fealty to them.

In 1111, Ramon Berenguer III, Count of Barcelona, inherited the fief of Besalú, to which was added in 1117 Cerdanya. The possession of Roussillon by its last count, Girard II, was challenged by his illegitimate brothers. To ensure that his brothers would not inherit his territories, in his will Girard II left all his lands to Alfonso II of Aragon, who took possession in 1172. Under the Aragonese monarchs, economic and demographic growth of the region continued, and Collioure (Catalan: Cotlliure), the port of Perpignan, became an important locus of Mediterranean trade.[citation needed]

As the French and Spanish crowns grew in power, the region of Roussillon, forming part of the border between them, was frequently a site of military conflict. By the Treaty of Corbeil (1258), Louis IX of France formally surrendered sovereignty over Roussillon and his claim to the title of Count of Barcelona to the Crown of Aragon, recognizing a centuries-old reality.[citation needed]

James I of Aragon had wrested the Balearic Isles from the Moors and joined these islands with Roussillon to create the Kingdom of Majorca, with its capital at Perpignan. In 1276, James I granted this kingdom to his son, who became James II. The subsequent disputes of this monarch with his brother Peter III were exploited by Philip III of France in his quarrel with Peter III for the crown of the Two Sicilies. Philip III espoused James II's cause and led an army into Aragon but, retreating, died at Perpignan in 1285. Lacking the resources to continue the struggle, James then became reconciled to his brother Peter, and in 1311 the former was succeeded by his son Sanç I, or Sancho I, who founded the cathedral of Perpignan shortly before his death in 1324. His successor, James III of Majorca, refused to do homage to Philip VI of France for the seigneury of Montpellier, and applied to Peter IV of Aragon for aid. Peter not only refused, but declared war and seized Majorca and Roussillon in 1344.[citation needed]

The province was now reunited to the Crown of Aragon, and it enjoyed peace until 1462. In that year, the disputes between John II of Aragon and his son over the Crown of Navarre spurred Louis XI of France to support John against his subjects, who had risen in revolt. The province, having been pledged as collateral to Louis for 300,000 crowns, was occupied by French troops until 1493, when Charles VIII evacuated the region as part of a settlement with the Catholic Monarchs of Castile and Aragon, Isabel I and Ferdinand II.

During a subsequent war between France and Spain (1496–1498), the people suffered equally from the Spanish garrisons and the French invaders. But dislike of the Castilians was soon effaced in the pride of sharing in the glory of the Emperor Charles I of Spain, and in 1542, when Perpignan was besieged by the forces of Henry, Dauphin of France, the inhabitants supported their monarch, earning that city the royal sobriquet, "Most Faithful City."

When the Catalans rose against the Spanish Crown in 1641, Louis XIII of France entered the conflict on the side of the former. After a protracted war, the Treaty of the Pyrenees (1659) secured Roussillon and part of the Cerdanya (Cerdagne) to the French crown, creating the French province of Roussillon. The next fifty years saw a concerted effort by Louis XIV both to ensure the political allegiance of his new subjects and to alter their cultural identity. He was successful in the former but failed in the latter. Outside the capital of Perpignan, Roussillon remained distinctly Catalan in outlook and culture until the late nineteenth century, when industrialization began to replace Catalan identity with French.