The rowans or mountain-ashes are shrubs or trees in genus Sorbus of the rose family Rosaceae. They are native throughout the cool temperate regions of the Northern Hemisphere, with the highest species diversity in the mountains of western China and the Himalaya, where numerous apomictic microspecies occur.[1] The name rowan was originally applied to the species Sorbus aucuparia, and is also used for other species in Sorbus subgenus Sorbus.[2] Rowans are unrelated to the true ash trees, which belong to the genus Fraxinus, family Oleaceae, though their leaves are superficially similar.

Formerly, when a wider variety of fruits were commonly eaten in European and North American culture, Sorbus counted among the home fruits, though Sorbus domestica is all but extinct in Britain, where it was traditionally revered.[3] Natural hybrids, often including Sorbus aucuparia and the whitebeam, Sorbus aria, give rise to many endemic variants in the UK.[4]

The traditional names of the rowan are those applied to the species Sorbus aucuparia, Sorbus torminalis (wild service-tree), and Sorbus domestica (true service-tree). The Latin name sorbus was borrowed into Old English as syrfe. The name "service-tree" for Sorbus domestica is derived from that name by folk etymology. The Latin name sorbus is from a root for "red, reddish-brown" (PIE *sor-/*ser-); English sorb is attested from the 1520s in the sense "fruit of the service tree", adopted via French sorbe from Latin sorbum "service-berry". Sorbus domestica is also known as "Whitty Pear", the adjective whitty meaning "pinnate". The name "mountain-ash" for Sorbus domestica is due to a superficial similarity of the rowan leaves to those of the ash; not to be confused in Fraxinus ornus, a true ash that is also known as "mountain ash".[5] Sorbus torminalis is also known as "chequer tree"; its fruits, formerly used to flavour beer, being called "chequers", perhaps from the spotted pattern of the fruit.

The name rowan is recorded from 1804, detached from an earlier rowan-tree, rountree, attested from the 1540s in northern English and Scottish. It is from a North Germanic source (such as Middle Norwegian), derived from Old Norse reynir (c.f. Norwegian rogn, Danish røn, Swedish rönn), ultimately from the Germanic verb *raud-inan "to redden", in reference to the berries (as is the Latin name sorbus). Various dialectal variants of rowan are found in English, including ran, roan, rodan, royan, royne, round, rune.[citation needed]

The Old English name of the rowan is cwic-beám, which survives in the name quickbeam (also quicken, quicken-tree, and variants). This name by the 19th-century was reinterpreted as connected to the word witch, from a dialectal variant wick for quick and names such as wicken-tree, wich-tree, wicky, wiggan-tree, giving rise to names such as witch-hazel[6] and witch-tree.[7]

The Old Irish name is cairtheand, reflected in Modern Irish caorann. The "arboreal" Bríatharogam in the Book of Ballymote associates the rowan with the letter luis, with the gloss "delightful to the eye (li sula) is luis, i.e. rowan (caertheand), owing to the beauty of its berries". Due to this, "delight of the eye" (vel sim.) has been reported as a "name of the rowan" by some commentators.[who?]

In the Canadian provinces of Newfoundland and Labrador and Nova Scotia, this species is commonly referred to as a "dogberry" tree.[8] In German, Sorbus aucuparia is known as the Vogelbeerbaum ("bird-berry-tree") or as Eberesche. The latter is a compound of the name of the ash tree (Esche) with what is contemporarily the name of the boar (Eber) but in fact the continuation of a Gaulish name, eburo- (also the name for a dark reddish-brown colour, cognate with Greek orphnos, Old Norse iarpr "brown"); like sorbus, eburo- seems to have referred to the colour of the berries; it is also recorded as a Gaulish name for the yew (which also has red berries), see also Eburodunum (disambiguation). The Welsh name Criafol refers to the tree as "lamenting fruit", associating the red fruit with the blood of Christ; as Welsh tradition believed the Cross was carved from the wood of this tree. 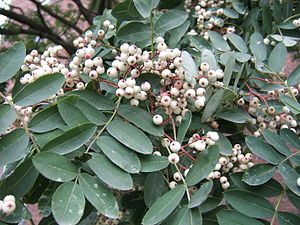 Rowans are mostly small deciduous trees 10–20 m tall, though a few are shrubs. The leaves are arranged alternately, and are pinnate, with (7–)11–35 leaflets; a terminal leaflet is always present. The flowers are borne in dense corymbs; each flower is creamy white, and 5–10 mm across with five petals. The fruit is a small pome 4–8 mm diameter, bright orange or red in most species, but pink, yellow or white in some Asian species. The fruit are soft and juicy, which makes them a very good food for birds, particularly waxwings and thrushes, which then distribute the rowan seeds in their droppings.[1] Due to their small size the fruits are often referred to as berries, but a true berry is a simple fruit produced from a single ovary, whereas a pome is an accessory fruit.

Rowan is used as a food plant by the larvae of some Lepidoptera species; see Lepidoptera that feed on Sorbus. 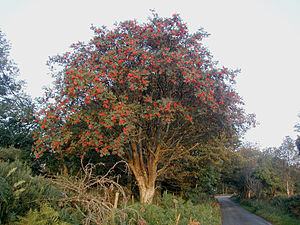 The best-known species is the European Rowan Sorbus aucuparia, a small tree typically 4–12 m tall growing in a variety of habitats throughout northern Europe and in mountains in southern Europe and southwest Asia. Its berries are a favourite food for many birds and are a traditional wild-collected food in Britain and Scandinavia. It is one of the hardiest European trees, occurring to 71° north in Vardø in Arctic Norway, and has also become widely naturalised in northern North America. 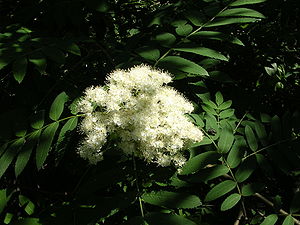 The greatest diversity of form as well as the largest number of Rowan species is in Asia, with very distinctive species such as Sargent's Rowan Sorbus sargentiana with large leaves 20–35 cm long and 15–20 cm broad and very large corymbs with 200–500 flowers, and at the other extreme, Small-leaf Rowan Sorbus microphylla with leaves 8–12 cm long and 2.5–3 cm broad. While most are trees, the Dwarf Rowan Sorbus reducta is a low shrub to 50 cm tall. Several of the Asian species are widely cultivated as ornamental trees.

Numerous hybrids, mostly behaving as true species reproducing by apomixis, occur between rowans and whitebeams; these are variably intermediate between their parents but generally more resemble whitebeams and are usually grouped with them (q.v.).

Rowans are excellent small ornamental trees for parks, gardens and wildlife areas. Several of the Chinese species, such as White-fruited rowan (Sorbus glabrescens) are popular for their unusual fruit colour, and Sargent's rowan (Sorbus sargentiana) for its exceptionally large clusters of fruit. Numerous cultivars have also been selected for garden use, several of them, such as the yellow-fruited Sorbus 'Joseph Rock', of hybrid origin.[1] They are very attractive to fruit-eating birds, which is reflected in the old name "bird catcher".

The wood is dense and used for carving and turning and for tool handles and walking sticks.[9] Rowan fruit are a traditional source of tannins for mordanting vegetable dyes.[10] In Finland, it has been a traditional wood of choice for horse sled shafts and rake spikes.

The fruit of European Rowan (Sorbus aucuparia) can be made into a slightly bitter jelly which in Britain is traditionally eaten as an accompaniment to game, and into jams and other preserves, on their own, or with other fruit. The fruit can also be a substitute for coffee beans, and have many uses in alcoholic beverages: to flavour liqueurs and cordials, to produce country wine, and to flavour ale. In Austria a clear rowan schnapps is distilled which is called by its German name Vogelbeerschnaps. Czechs also make a Rowan liquor called jeřabinka[11] and the Welsh used to make one called diodgriafel.[12]

Rowan cultivars with superior fruit for human food use are available but not common; mostly the fruits are gathered from wild trees growing on public lands.

Rowan fruit contains sorbic acid, an acid that takes its name from the Latin name of the genus Sorbus. The raw fruit also contain parasorbic acid (about 0.4%-0.7% in the European rowan[13]), which causes indigestion and can lead to kidney damage, but heat treatment (cooking, heat-drying etc.) and, to a lesser extent, freezing, neutralises it, by changing it to the benign sorbic acid. Luckily, they are also usually too astringent to be palatable when raw. Collecting them after first frost (or putting in the freezer) cuts down on the bitter taste as well.

The European rowan (Sorbus aucuparia) has a long tradition in European mythology and folklore. It was thought to be a magical tree and give protection against malevolent beings.[14] The tree was also called "wayfarer's tree" or "traveller's tree" because it supposedly prevents those on a journey from getting lost.[15] It was said in England that this was the tree on which the Devil hanged his mother. [16]

British folklorists of the Victorian era reported the folk belief in apotropaic powers of the rowan-tree, in particular in the warding off of witches. Such a report is given by Edwin Lees (1856) for the Wyre Forest in the English West Midlands.[17] Sir James Frazer (1890) reported such a tradition in Scotland, where the tree was often planted near a gate or front door.[18] According to Frazer, birds' droppings often contain rowan seeds, and if such droppings land in a fork or hole where old leaves have accumulated on a larger tree, such as an oak or a maple, they may result in a rowan growing as an epiphyte on the larger tree. Such a rowan is called a "flying rowan" and was thought of as especially potent against witches and their magic, and as a counter-charm against sorcery.[19] In 1891, Charles Godfrey Leland also reported traditions of rowan's apotropaic powers against witches in English folklore, citing the Denham Tracts (collected between 1846 and 1859).[20]

In Norse mythology, the goddess Sif is the wife of the thunder god Thor. Sif has been linked with Ravdna, the consort of the Sami thunder-god Horagalles. Red berries of rowan were holy to Ravdna, and the name Ravdna resembles North Germanic words for the tree (for example, Old Norse reynir). According to Skáldskaparmál the rowan is called "the salvation of Thor" because Thor once saved himself by clinging to it. It has been theorized that Sif was once conceived in the form of a rowan to which Thor clung.[21]

In Neo-Druidry, the Rowan is known as the Portal Tree. It is considered the threshold, between this world and otherworld, or between here and where ever you may be going, for example, it was placed at the gate to a property, signifying the crossing of the threshold between the path or street and the property of someone. According to Elen Sentier, in her book,[22] "Threshold is a place of both INGRESS (the way in) and EGRESS (the way out). Rowan is a portal, threshold tree offering you the chance of 'going somewherere ... and leaving somewhere."[23]

In Newfoundland, popular folklore maintains that a heavy crop of fruit means a hard or difficult winter. Similarly, in Finland and Sweden, the number of fruit on the trees was used as a predictor of the snow cover during winter, but here the belief was that the rowan "will not bear a heavy load of fruit and a heavy load of snow in the same year", that is, a heavy fruit crop predicted a winter with little snow.

However, as fruit production for a given summer is related to weather conditions the previous summer, with warm, dry summers increasing the amount of stored sugars available for subsequent flower and fruit production, it has no predictive relationship to the weather of the next winter.[24][25]

In Sweden, it was also thought that if the rowan trees grew pale and lost color, the fall and winter would bring much illness.[28]