From Infogalactic: the planetary knowledge core
Jump to: navigation, search
This article is about the postal reformer. For other people named Rowland Hill, see Rowland Hill (disambiguation).

Sir Rowland Hill KCB, FRS (3 December 1795 – 27 August 1879) was an English teacher, inventor and social reformer. He campaigned for a comprehensive reform of the postal system, based on the concept of Uniform Penny Post and his solution of prepayment, facilitating the safe, speedy and cheap transfer of letters. Hill later served as a government postal official, and he is usually credited with originating the basic concepts of the modern postal service, including the invention of the postage stamp.

Hill was born in Blackwell Street, Kidderminster, Worcestershire, England. Rowland's father, Thomas Wright Hill, was an innovator in education and politics, including among his friends Joseph Priestley, Tom Paine and Richard Price.[1] At the age of 12, Rowland became a student-teacher in his father's school. He taught astronomy and earned extra money fixing scientific instruments. He also worked at the Assay Office in Birmingham[2] and painted landscapes in his spare time.[3]

In 1819 he moved his father's school "Hill Top" from central Birmingham, establishing the Hazelwood School at Edgbaston, an affluent neighbourhood of Birmingham, as an "educational refraction of Priestley's ideas".[4][5] Hazelwood was to provide a model for public education for the emerging middle classes, aiming for useful, pupil-centred education which would give sufficient knowledge, skills and understanding to allow a student to continue self-education through a life "most useful to society and most happy to himself".[6] The school, which Hill designed, included innovations including a science laboratory, a swimming pool, and forced air heating. In his Plans for the Government and Liberal Instruction of Boys in Large Numbers Drawn from Experience (1822, often cited as Public Education) he argued that kindness, instead of caning, and moral influence, rather than fear, should be the predominant forces in school discipline. Science was to be a compulsory subject, and students were to be self-governing.[3][7] Hazelwood gained international attention when French education leader and editor Marc Antoine Jullien, former secretary to Maximilien de Robespierre, visited and wrote about the school in the June 1823 issue of his journal Revue encyclopédique. Jullien even transferred his son there. Hazelwood so impressed Jeremy Bentham that in 1827 a branch of the school was created at Bruce Castle in Tottenham, London. In 1833, the original Hazelwood School closed and its educational system was continued at the new Bruce Castle School of which Hill was head master from 1827 until 1839.

The colonisation of South Australia was a project of Edward Gibbon Wakefield, who believed that many of the social problems in Britain were caused by overcrowding and overpopulation. In 1832 Rowland Hill published a tract called Home colonies : sketch of a plan for the gradual extinction of pauperism, and for the diminution of crime, based on a Dutch model.[8] Hill then served from 1833 until 1839 as secretary of the South Australian Colonization Commission, which worked successfully to establish a settlement without convicts at what is today Adelaide. The political economist, Robert Torrens was chairman of the Commission.[9] Under the South Australia Act 1834, the colony was to embody the ideals and best qualities of British society, shaped by religious freedom and a commitment to social progress and civil liberties. Rowland Hill's sister Caroline Clark, husband Francis and their large family were to migrate to South Australia in 1850.[10]

Rowland Hill first started to take a serious interest in postal reforms in 1835.[11] In 1836 Robert Wallace, MP, provided Hill with numerous books and documents, which Hill described as a "half hundred weight of material".[12] Hill commenced a detailed study of these documents and this led him to the publication, in early 1837, of a pamphlet called Post Office Reform its Importance and Practicability. He submitted a copy of this to the Chancellor of the Exchequer, Thomas Spring Rice, on 4 January 1837.[13] This first edition was marked "private and confidential" and was not released to the general public. The Chancellor summoned Hill to a meeting in which the Chancellor suggested improvements, asked for reconsiderations and requested a supplement which Hill duly produced and supplied on 28 January 1837.[14] 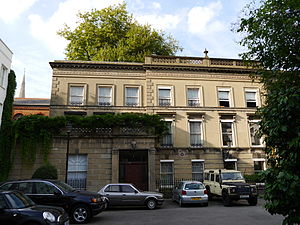 In the 1830s at least 12½% of all British mail was conveyed under the personal frank of peers, dignitaries and members of parliament, while censorship and political espionage were conducted by postal officials. Fundamentally, the postal system was mismanaged, wasteful, expensive and slow. It had become inadequate for the needs of an expanding commercial and industrial nation.[15] There is a well-known story, probably apocryphal, about how Hill gained an interest in reforming the postal system; he apparently noticed a young woman too poor to redeem a letter sent to her by her fiancé. At that time, letters were normally paid for by the recipient, not the sender. The recipient could simply refuse delivery. Frauds were commonplace; for example, coded information could appear on the cover of the letter; the recipient would examine the cover to gain the information, and then refuse delivery to avoid payment. Each individual letter had to be logged. In addition, postal rates were complex, depending on the distance and the number of sheets in the letter.[16]

Richard Cobden and John Ramsey McCulloch, both advocates of free trade, attacked the policies of privilege and protection of the Tory government. McCulloch, in 1833, advanced the view that "nothing contributes more to facilitate commerce than the safe, speedy and cheap conveyance of letters."[17] 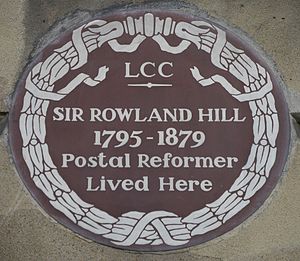 Hill's pamphlet, Post Office Reform: its Importance and Practicability, referred to above, was privately circulated in 1837. The report called for "low and uniform rates" according to weight, rather than distance. Hill's study reported his findings and those of Charles Babbage that most of the costs in the postal system were not for transport, but rather for laborious handling procedures at the origins and the destinations. Costs could be reduced dramatically if postage were prepaid by the sender, the prepayment to be proven by the use of prepaid letter sheets or adhesive stamps (adhesive stamps had long been used to show payment of taxes, on documents for example). Letter sheets were to be used because envelopes were not yet common; they were not yet mass-produced, and in an era when postage was calculated partly on the basis of the number of sheets of paper used, the same sheet of paper would be folded and serve for both the message and the address. In addition, Hill proposed to lower the postage rate to a penny per half ounce, without regard to distance.[18] He first presented his proposal to the Government in 1837.

In the House of Lords the Postmaster, Lord Lichfield, a Whig, denounced Hill's "wild and visionary schemes." William Leader Maberly, Secretary to the Post Office, also a Whig, denounced Hill's study: "This plan appears to be a preposterous one, utterly unsupported by facts and resting entirely on assumption". But merchants, traders and bankers viewed the existing system as corrupt and a restraint of trade. They formed a "Mercantile Committee" to advocate for Hill's plan and pushed for its adoption. In 1839 Hill was given a two-year contract to run the new system. 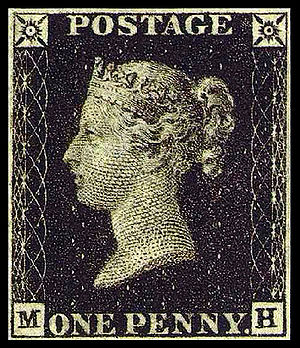 The Uniform Fourpenny Post rate was introduced that lowered the cost to fourpence from 5 December 1839,[20] then to the penny rate on 10 January 1840, even before stamps or letter sheets could be printed. The volume of paid internal correspondence increased dramatically, by 120%, between November 1839 and February 1840. This initial increase resulted from the elimination of "free franking" privileges and fraud.

Prepaid letter sheets, with a design by William Mulready, were distributed in early 1840. These Mulready envelopes were not popular and were widely satirised. According to a brochure distributed by the National Postal Museum (now the British Postal Museum & Archive), the Mulready envelopes threatened the livelihoods of stationery manufacturers, who encouraged the satires. They became so unpopular that the government used them on official mail and destroyed many others.

In May 1840 the World's first adhesive postage stamps were distributed. With an elegant engraving of the young Queen Victoria (whose 21st birthday was celebrated that month), the Penny Black was an instant success. Refinements, such as perforations to ease the separating of the stamps, were instituted with later issues.

Rowland Hill continued at the Post Office until the Conservative Party won the 1841 General Election. Sir Robert Peel returned to office on 30 August 1841 and served until 29 June 1846. Amid rancorous controversy, Hill was dismissed in July 1842. However, the London and Brighton Railway named him a director and later chairman of the board, from 1843 to 1846. He lowered the fares from London to Brighton, expanded the routes, offered special excursion trains, and made the commute comfortable for passengers. In 1844 Edwin Chadwick, Rowland Hill, John Stuart Mill, Lyon Playfair, Dr. Neill Arnott, and other friends formed a society called "Friends in Council," which met at each other's houses to discuss questions of political economy.[21] Hill also became a member of the influential Political Economy Club, founded by David Ricardo and other classical economists, but now including many powerful businessmen and political figures.[9]

In 1846 the Conservative party split over the repeal of the Corn Laws and was replaced by a Whig government led by Lord Russell. Hill was made Secretary to the Postmaster General, and then Secretary to the Post Office from 1854 until 1864. For his services Hill was knighted as a Knight Commander of the Order of the Bath in 1860. He was made a Fellow of the Royal Society and awarded an honorary degree from University of Oxford. 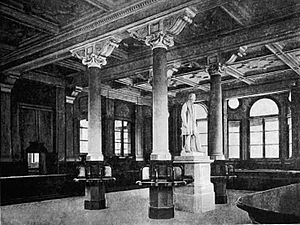 The Birmingham statue in the City's General Post Office, circa 1894, shortly after its opening.

Hill has two legacies. The first was his model for education of the emerging middle classes. The second was his model for an efficient postal system to serve business and the public, including the postage stamp and the system of low and uniform postal rates, which is often taken for granted in the modern World.[23] In this, he not only changed postal services around the world, but also made commerce more efficient and profitable, notwithstanding the fact that it took 30 years before the British Post Office's revenue recovered to the level it had been at in 1839. Uniform Penny Post continued in the UK into the 20th century, and at one point, one penny paid for up to four ounces.

There are three public statues of Hill. The earliest is in Birmingham: a Carrara marble sculpture by Peter Hollins unveiled in 1870.[24] Its location was moved in 1874, 1891 (when it was placed in the City's General Post Office) and 1934.[24] In 1940 it was removed for safe keeping for the duration of the Second World War.[24]

A marble statue in Kidderminster, Hill's birthplace, was sculpted by Sir Thomas Brock and unveiled in June 1881.[25] It is at the junction of Vicar and Exchange Streets.[25] Hill is prominent in Kidderminster's community history. There is a J D Wetherspoon pub called The Penny Black in the town centre and a large shopping mall linking Vicar Street and Worcester Street is named The Rowland Hill Shopping Centre.

In London a bronze statue by Edward Onslow Ford, also made in 1881, stands in King Edward Street.[26] 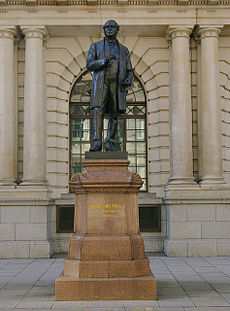 There are at least two marble busts of Hill, also unveiled in 1881. One, by W. D. Keyworth, Jr. is in St Paul's Chapel, Westminster Abbey.[27] Another, by William Theed, is in Albert Square, Manchester.[28]

In recognition of his contributions to the development of the modern postal system, Rowland Hill is memoralised at the Universal Postal Union, the UN agency charged with regulating the international postal system. His name appears on one of the two large meeting halls at the UPU headquarters in Berne, Switzerland.[citation needed]

At Tottenham, north London, there is now[update] a local History Museum at Bruce Castle (where Hill lived during the 1840s) including some relevant exhibits.

The Rowland Hill Awards,[29] started by the Royal Mail and the British Philatelic Trust in 1997,[30] are annual awards for philatelic "innovation, initiative and enterprise."

In 1882 the Post Office instituted the Rowland Hill Fund for postal workers, pensioners and dependants in need.[31]