It was named after the Royal Burgh of Roxburgh, a town which declined markedly in the 15th century and is no longer in existence. Latterly, the county town of Roxburghshire was Jedburgh. Today, the main towns in the county are Jedburgh, Hawick, Kelso and Melrose.

Today, Roxburghshire is within the Scottish Borders council area for local government purposes and contains the administrative centre of the area, the small town of Newtown St Boswells. It retains official status as a registration county, and falls within the Roxburgh, Ettrick and Lauderdale lieutenancy area for ceremonial purposes. The term Teviotdale was used in the past to define an area which was drained by the River Teviot, the River Tweed and their tributaries, and its boundary is similar to Roxburghshire.[1]

Until 1975, Roxburghshire was one of the counties of Scotland, governed by a county council from 1890.

The ancient royal burgh of Roxburgh, from which the county had taken its name, had fallen into decay by the fifteenth century. After the demise of the town of Roxburgh, the county administration was based in Jedburgh, the county town. County Buildings were erected near the market place in 1812, in which the different courts met and the county officials transacted their business. [2] After the 1894 County Council meetings were held at Newtown St Boswells, Kelso and Jedburgh until 1908 when Newtown St. Boswells became the headquarters for Roxburgh County Council. Roxburgh County Offices were built there around 1930. New buildings by Peter Womersley were opened in 1968 and after local government re-organisation (Local Government (Scotland) Act 1973) they became the headquarters of Borders Regions in 1975. [3] The Duke of Buccleuch and the Duke of Roxburghe between them held the convenorship of Roxburgh County Council for 43 years between 1900 and 1975.[4]

At the time of the county administration's abolition it contained four burghs and four districts:

The Local Government (Scotland) Act 1973 abolished the county and incorporated its area into the Borders Region. Borders was divided into four districts, one of which was named Roxburgh. Roxburgh District consisted of the former county less the Melrose area (which was included in Ettrick and Lauderdale District), plus the parish of Nenthorn from Berwickshire. The regional and four district councils were abolished in 1996, merging to form the present Scottish Borders council area. 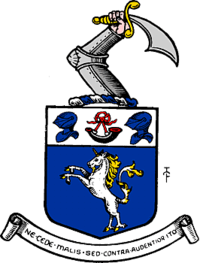 The County of Roxburgh was the first Scottish county to receive a grant of arms. This was made by Lord Lyon King of Arms on 9 July 1798. The coat of arms seems to have been granted for the use of the volunteer and militia units then being organised under the authority of the county's lord lieutenant. When the county council was formed in 1890, the arms passed to them.

The shield depicted a unicorn, a national symbol of Scotland. At the top of the shield was a hunting horn between two helmets: probably a reference to the border reivers, one of whom featured in the arms of the royal burgh of Jedburgh. The crest above the shield was an armoured arm brandishing a scimitar. The Latin motto was Ne Cede Malis Sed Contra Audentior Ito or Yield not to misfortunes (evil things) but go on more boldly against them., it was a quotation from Virgil's Aeneid 6, 95.[5]

On 6 May 1975 the coat of arms was regranted to Roxburgh District Council, without the crest.[6] When the district council was abolished in 1996, the arms reverted to The Crown.

Following the boundary changes carried out under the Local Government (Scotland) Act 1889, the county of Roxburgh contained 30 civil parishes:

Most common surnames in Roxburghshire at the time of the United Kingdom Census of 1881,[8] by order of incidence: