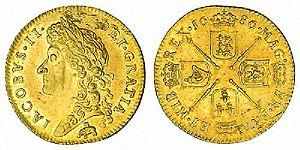 1686 guinea showing the company's logo, an elephant and castle, under bust of James II

The Royal African Company was a mercantile company set up by the Stuart family and London merchants to trade along the west coast of Africa. It was led by James, Duke of York, Charles II's brother. Its original purpose was to exploit the gold fields up the Gambia River identified by Prince Rupert during the Interregnum, and it was set up once Charles II gained the English throne in the Restoration of 1660.[1] However, it was soon engaged in the slave trade as well as with other commodities.

Originally known as the Company of Royal Adventurers Trading to Africa, by its charter issued in 1660 it was granted a monopoly over English trade with West Africa. With the help of the army and navy, it established forts on the West African coast that served as staging and trading stations and was responsible for seizing any English ships that attempted to operate in violation of the company's monopoly. In the prize court, the King received half of the proceeds and the company half.[2]

The company fell heavily into debt in 1667, during the war with the Netherlands, the very war it had itself started when its Admiral Robert Holmes had attacked the Dutch African trade posts in 1664, as it had lost most of its forts on the African coast except for Cape Corse.[3] For several years after that, the company maintained some desultory trade, including licensing single-trip private traders, but its biggest effort was the creation in 1668 of the Gambia Adventurers,[4] a new company separately subscribed and granted a ten-year license for African trade north of the Bight of Benin with effect from 1 January 1669.[5] In 1672, the original Company re-emerged, re-structured and with a new charter from the king, as the new Royal African Company. Its new charter was broader than the old one and included the right to set up forts and factories, maintain troops and exercise martial law in West Africa, in pursuit of trade in gold, silver and slaves.[6] At the end of 1678, the license to the Gambia Adventurers expired and its Gambian trade was merged into the company.[7]

In the 1680s the Company was transporting about 5,000 slaves a year across the Atlantic. Many were branded with the letters 'DY', for its Governor, the Duke of York, who succeeded his brother on the throne in 1685, becoming King James II. Other slaves were branded with the company's initials, RAC, on their chests.[8]

Between 1672 and 1689, the Company transported 90,000 to 100,000 slaves. Its profits made a major contribution to the increase in the financial power of those who controlled the City of London.

From 1694 to 1700, the company was a major participant in the Komenda Wars in the port city Komenda in the Eguafo Kingdom in modern-day Ghana. The company allied with a merchant prince named John Cabess and various neighbouring African kingdoms to depose the king of Eguafo and establish a permanent fort and factory in Komenda.[9]

In 1689, the Company acknowledged that it had lost its monopoly with the end of royal power in the Glorious Revolution.[10] In 1698, the change was enacted into law by an act, which opened the African trade to all English merchants who paid a ten per cent levy to the Company on all goods exported from Africa.[11] This development was advantageous for merchants in Bristol even if, like the Bristolian Edward Colston, they had already been involved in the trade. The number of slaves transported on English ships subsequently increased dramatically.

The Company continued purchasing and transporting slaves until 1731, when it abandoned slaving in favour of ivory and gold dust. Charles Hayes (1678–1760), mathematician and chronologer, was sub-governor of Royal African Company until 1752, when it was dissolved. Its successor was the African Company of Merchants.

The Royal African Company's logo depicted an elephant and castle.

From 1668 to 1722, the Royal African Company provided gold to the English Mint. Coins made with such gold bear an elephant below the bust of the king and/or queen. This gold also gave the coinage its name, the guinea.[12]