This article is about the dock in London, for other uses see Albert Dock (disambiguation) 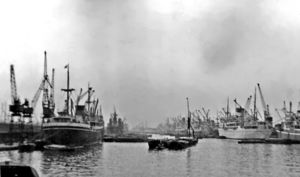 The Royal Albert Dock is one of three docks in the Royal Group of Docks of east London, England now part of the redeveloped Docklands. 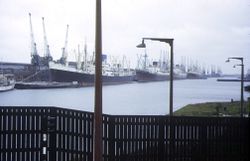 The dock was constructed to the east of the earlier Victoria Dock by the St Katharine and London dock companies and opened in 1880. It was even larger than the Victoria, with over 3 miles of quay, and an entrance to the Thames far down river at Gallions Reach. To the south at the western end were two dry docks and machine shops used for ship repairs by R & H Green & Silley Weir (later River Thames Shiprepairs Ltd).

The dock closed to commercial traffic along with the other Royal Docks in the 1980s. The dock itself still exists and is now used chiefly for watersports and as a rowing course, although it is occasionally transited by ships on their way to the Royal Victoria Dock and exhibitions at the ExCeL Exhibition Centre.

The major feature of the dock today is London City Airport, whose single runway has been constructed the length of the south side of the dock, with the dock forming the northern boundary of the airport. The filled dry docks and ship repair works site lie under the runway. Aircraft movements are clearly visible across the dock from the largely accessible north quayside.

Transport links on the north side of the dock have been greatly improved with new roads and the Docklands Light Railway Beckton line running the length of the dock. From the dock's western end, where it meets the Royal Victoria Dock there is the London Regatta Centre, an international class rowing centre, with the Yi-Ban Chinese restaurant on top of the building. The regatta centre contains facilities for rowers and dragon boaters such as a gymnasium, boat tank, and boathouse, and is home to several clubs, including Queen Mary, University of London Boat Club, University of East London Boat Club, Royal Docks Rowing Club, Typhoon DBC, Thames Dragons, and Raging Dragons.

After this comes the Newham Dockside office development, which until July 2007 had stood vacant for three years since completion apart from being used for several film shoots. Newham Dockside is now occupied by London Borough of Newham who relocated some 2,500 of its staff to the building from April 2008.

A large parcel of undeveloped land, some 35-acres, used for overflow car parking from the Excel exhibition centre and interrupting pedestrian access to the dock edge follows, which surprisingly contains a short aircraft runway used for the 2007 and 2008 Red Bull Air Race in London. This was originally intended to be developed as the Royals Business Park, but the project was put on hiatus in response to global economic depression.

At the eastern end of the north quayside is the University of East London's Docklands Campus, opened in 1999, and which provided the United States Olympic Team with their training base during the London 2012 Olympic and Paralympic Games.[1][2]

In May 2013, it was announced by the Mayor of London, Boris Johnson, that Advanced Business Park (ABP), a Chinese developer, had signed a billion pounds deal to develop the site with a complex of offices, apartments and shops.[3] The site, to be known as Asian Business Port,[4] will be aimed at Asian companies wanting to set-up European headquarters, and is the largest investment by a Chinese company in the UK. The architects will be Terry Farrell and Partners and will be a joint venture with British developers Stanhope plc. The Mayor claims the development will be worth £6bn to the capital's economy.[5] Built over 10 years in four phases, the project’s first phase will develop 600,000 sq ft of offices and homes. It is aimed for completion in 2017.[6] The opening is supposed to coincide with the opening of Crossrail, which will stop at nearby Custom House station that is currently just on the Docklands Light Railway (DLR) line. Until then, the area is served by Beckton Park and Royal Albert DLR stations.