The Royal Armoured Corps (RAC) provides the armour capability of the British Army, with vehicles such as the Challenger 2 Tank and the Scimitar Reconnaissance Vehicle. It was created as a loose association of armoured regiments, both the Royal Tank Regiment and those converted from old horse cavalry regiments.[1] Today it comprises ten regular regiments and four Yeomanry regiments of the Army Reserve.

The RAC was created on 4 April 1939, just before World War II started, by combining regiments from the cavalry of the line which had mechanised with the Royal Tank Corps (renamed Royal Tank Regiment).[2] As the war went on and other regular cavalry and Territorial Army Yeomanry units became mechanised, the corps was enlarged.[3] A significant number of infantry battalions also converted to the armoured role as RAC regiments.[4] In addition, the RAC created its own training and support regiments. Finally, in 1944, the RAC absorbed the regiments of the Reconnaissance Corps.[1] 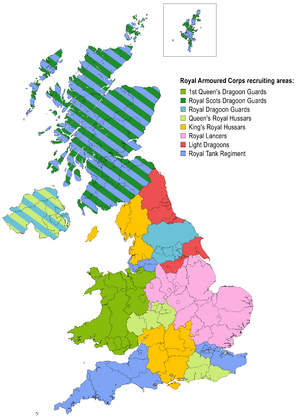 1: For operational purposes, the Household Cavalry Regiment is considered to be part of the RAC and constitutes the third armoured reconnaissance regiment. There are four reserve regiments:[5]

2: The Royal Tank Regiment retains a CBRN reconnaissance and support squadron as part of its establishment[6]

Regiments of the Royal Armoured Corps are based in the UK and Germany.[7] Under the Army2020 future basing plans all RAC regiments will be stationed in the UK; as of May 2021, the Queen's Royal Hussars are the final overseas based unit, and are due to return to Tidworth by 2018.

Delivering Security in a Changing World (2004)

The reorganisation of the Army announced in 2004 led to significant changes to the Royal Armoured Corps. Reorganisation that began in 2003 would see three armoured regiments removed from Germany to the UK, with one re-roled as an FR regiment. In addition, three Challenger 2 squadrons will be converted to Interim Medium Armour Squadrons, while each FR regiment will gain a Command and Support Squadron.[8]

As part of the reorganisation, postings will be realigned:

In 2012, following the Strategic Defence and Security Review of 2010, specific proposals about the make up of the future British Army were announced under the title Army 2020. These proposals were intended to reduce the size of the army to around 82,000. The Royal Armoured Corps was to be reduced by a total of two regiments, with the 9th/12th Royal Lancers amalgamated with the Queen's Royal Lancers to form a single lancer regiment, the Royal Lancers, and the 1st and 2nd Royal Tank Regiments joined to form a single Royal Tank Regiment.

The new structure of the Reaction Force will see three armoured regiments, each assigned to a new "Armoured Infantry Brigade", alongside a formation reconnaissance regiment (renamed as "armoured cavalry"), two armoured infantry battalions and a heavy protected mobility battalion. These six regiments will fall operationally under what will become known as the "reaction forces", which will be the army's high readiness force. The remaining three regiments will be located with the remainder of the regular army under what has been term the "adaptable forces", which will provide a pool of resources to back up operations conducted by the "reaction forces".

This new basing plan on 5 March 2013 gave an overview of where the regiments will be based.[13] All RAC regiments will be UK based, with the 1st The Queen’s Dragoon Guards moving to Swanton Morley, The Royal Scots Dragoon Guards moving to the Leuchars area, the Queen’s Royal Hussars to Tidworth, the Royal Lancers settling in Catterick, the Light Dragoons in Catterick, and the Royal Tank Regiment to Tidworth. The expected Army 2020 layout for the RAC is to be:

The Royal Yeomanry, The RMLY and the Queen's Own Yeomanry will be armed with Refurbished Weapons Mounted Integrated Kit (RWMIK) vehicles.[16]

This unit is allied with the following: